The vision of natural gas becoming more of a player in a broadening alternative transportation fuel sector moved a little closer to reality in recent days with technology, marketing and research funding advances. 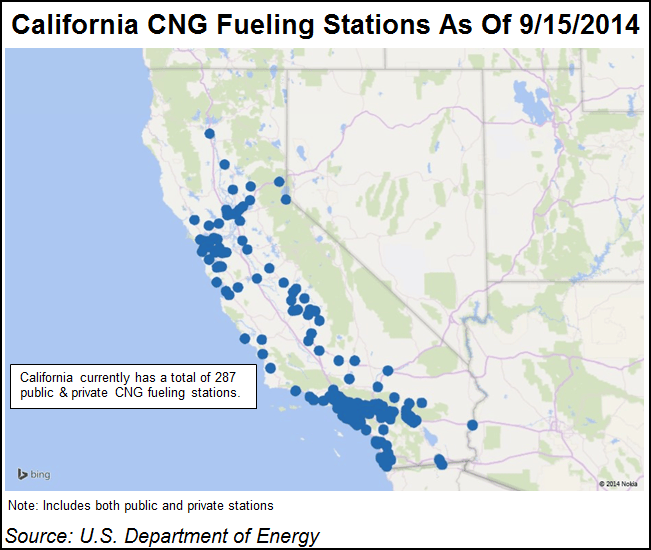 A couple of the developments come from long-time alternative fuel advocates and the third emerged from a relatively new marine natural gas transportation firm.

The maximum funding amount that may be requested for each proposal is $3 million, with a minimum of $1 million. Matching funding of at least 50% is required.

The CEC will host a pre-application workshop for the advanced vehicle manufacturing initiative in Sacramento on Sept. 19. Applications will be accepted until Nov. 7

Meanwhile, Bimbo’s trucking fleets across the nation will continue to expand or begin new natural gas fueling operations, according to Clean Energy, which said it and about 40 competitors have opened nearly 100 public heavy-duty truck-friendly stations so far in 2014, according to the U.S. Department of Energy’s Alternative Fuels Data Center. This translates into an annual infrastructure growth rate of more than 20%, with certain markets, like Texas, experiencing significant natural gas fueling station growth, a Clean Energy spokesperson said.

Bimbo has contracted with Clean Energy to introduce its first heavy-duty natural gas trucks into its fleet in California. The 16 heavy-duty natural gas trucks will use fuel from Clean Energy’s public-access CNG station network throughout Northern California. The initial deployment of trucks is expected to cut greenhouse gas emissions by more than 580 metric tons.BBU expects to explore options for adding more natural gas trucks to its fleet throughout the country based on the success of the initial deployment. BBU operates more than 65 bakeries and distributes products through 12,000 sales routes throughout the United States.

Blue Gas Marine manufactures a natural gas hybrid fuel-system for existing gasoline and diesel engines, along with supplying the fuel where boaters need it. Claiming to be the first of its kind in the United States, Blue Gas said its system is designed to be installed on existing outboard, inboard and generator engines, using either CNG or LNG. The company markets its hybrid fuel systems and natural gas fuel to frequent boat operators such as commercial fishermen, charter boats, ferries, tugs, large ships, the military and recreational users.

“Essentially, a boat with a Blue Gas Marine hybrid fuel-system can operate only on natural gas, or as a hybrid that carries natural gas and a traditional fuel like gasoline and can switch between the two on-demand,” said CEO Miguel Guerreiro. “Additionally, we will develop a network and distribute the natural gas to boaters to ensure the fuel is readily available to those making the change.”

KAG, Clean Energy’s contract carrier for LNG, is scheduled to expand its fleet with 24 additional LNG-fueled trucks. KAG has been operating 25 LNG trucks and fueling with Clean Energy since last year. Clean Rentals of New Bedford, MA, will begin a CNG pilot program with four heavy-duty trucks in a regional delivery application and fuel at Clean Energy’s public natural gas fueling network. And Modern Transportation is expanding its LNG fleet in the Mid-Atlantic. The fleet is currently running a high mileage application for Owens Corning with each truck traveling nearly 200,000 miles annually.