The U.S. Energy Information Administration (EIA) on Thursday reported an injection of 58 Bcf natural gas into storage for the week ended July 8. The result was in line with expectations – and above the five-year average – and it at least temporarily deflated a Nymex natural gas futures rally. 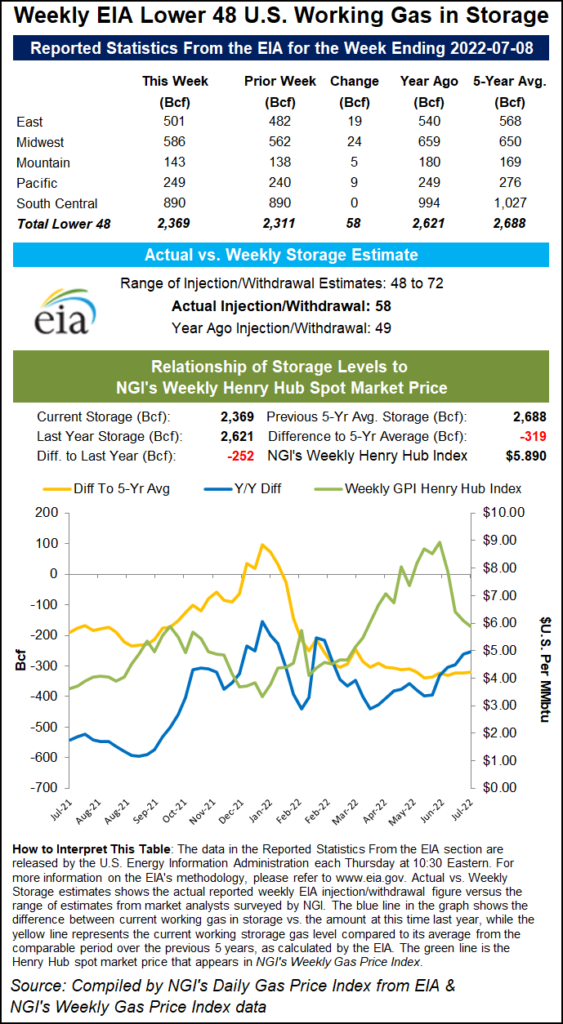 The latest build lifted working gas in storage to 2,369 Bcf. Still, stocks were 252 Bcf lower than a year earlier and 319 Bcf below the five-year average.

Temperatures during the latest EIA report week were hotter than normal over much of the country, according to NatGasWeather, while production proved choppy, bouncing between 94 Bcf and 96 Bcf. Amid unplanned maintenance projects, output has failed to reach and sustain the 97 Bcf level many analysts expected by early July.

Prior to the EIA report, median estimates of major surveys hung in the high-50s Bcf.

Results of Bloomberg’s poll showed a median injection projection of 58 Bcf, with a low estimate of 53 Bcf and a high of 72 Bcf.  Reuters’ survey produced injection estimates that spanned 48 Bcf to 69 Bcf. It landed at a median of 57 Bcf.

A Wall Street Journal poll found an average injection expectation of 61 Bcf, and it also generated a range of 48 Bcf to 69 Bcf.

From a price perspective, the actual result compared bearishly with an injection of 49 Bcf during the comparable week last year and a five-year average injection of 55 Bcf.

Broken down by region, the Midwest and East regions led with injections of 24 Bcf and 19 Bcf, respectively, according to EIA.  Pacific inventories rose by 9 Bcf, while Mountain region stocks increased by 5 Bcf.

South Central region stocks were flat, with a 12 Bcf increase in nonsalt facilities and a 12 Bcf drop in salts.

Looking ahead to next week, several analysts on Enelyst said they were expecting a more modest storage increase in the 30s Bcf or 40s Bcf. They cited extreme heat across much of the Lower 48 this week.

The “impressively hot” temperatures in the outlook for the back half of July and week/week production weakness support a bullish case, while weaker liquefied natural gas exports amid the Freeport LNG terminal outage support the bearish perspective, the firm said.