North American pressure pumper ProPetro Holding Corp., whose primary focus is the Permian Basin, has seen activity continue to decline through May and now expects reduced onshore completions activity through the rest of the year because of the oversupply in oil. 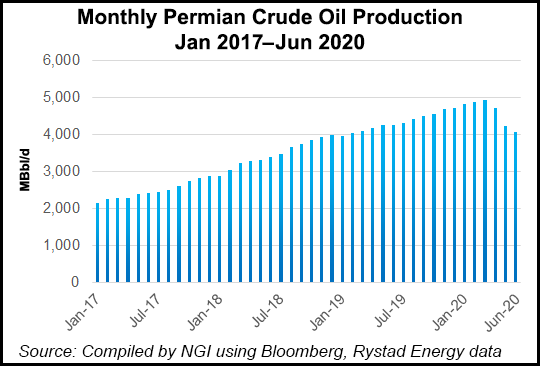 As economic activity recovers and U.S. crude is consumed, the Midland, TX-based operator is expected to be absorbed, CEO Phillip Gobe said during a conference call to discuss first quarter results and the outlook. He took the helm in March.

Through the first 10 weeks of the first quarter, ProPetro saw strong financial results, Gobe said. However, the sharp decline in oil prices during the second week of March “resulted in an extremely swift curtailment of well completions activity in all U.S. basins.

“As activity declined, we acted quickly to reduce our costs while continuing to provide safe and efficient service to our customers. We believe our early-year success is a positive indicator of our ability to execute in the face of these uncertain times.” However, “deteriorating market conditions resulted in necessary reductions to our workforce” toward the end of March.

“While we found it prudent to make these reductions, we have retained the capability to deliver efficient and safe services while protecting our ability to respond to a market that we expect to eventually improve.”

With most of its business in Permian, ProPetro remains favorably positioned, Gobe said. “We believe our deep customer relationships will prove critical as we navigate through this challenging period.”

A “significant portion” of 2Q2020 revenue is expected to come from idle fees payable by Pioneer Natural Resources Co. under their service agreement. The fees were designed to partially protect ProPetro in the event that fleets dedicated to Pioneer, one of its top customers, were idled.

Permian pure-play Pioneer has reduced capital expenditures (capex) as activity was cut back. Lower margin and higher cost vertical wells were curtailed, with the shut-ins totaling around 7,000 boe/d in early May. From the end of March to the end of the year, Pioneer, one of ProPetro’s top customers, plans to operate five to eight horizontal rigs in the Permian Midland sub-basin and operate two to three fracture fleets. Future activity levels were to be assessed monthly.

In line with reduced activity by its exploration and production customers, ProPetro has slashed capex for the year. In April the board, executives and officers voluntarily elected to reduce compensation at different levels up to 20%. The company also began evaluating additional strategic actions to benefit the cost structure.

Expenditures in 1Q2020 totaled about $40 million, nearly all directed to maintenance, other than $3.7 million directed to its DuraStim electric fracturing fleet initiatives. The proprietary 6,000 hydraulic hp (hhp) DuraStim pump claims to provide the equivalent of three times the effective horsepower of a conventional fracture unit, while operating at around 10% of the cyclic rate. Each DuraStim fleet consists of 36,000 hhp and related power equipment.

“As oilfield activity rapidly contracted, management modified the deployment of the first DuraStim fleet,” the company said. “Moving forward, the individual units will continue to be tested and developed by working alongside conventional equipment. This will allow the company ample time to collect data in various operating conditions, both controlled environments and field trials, for the purpose of optimizing its DuraStim technology initiative.”

The company has “minimal commitments for growth capital expenditures for the remainder of 2020 and expects to significantly reduce maintenance capital expenditures and field level consumable costs throughout the rest of the year,” management said. Based on forecasts, full-year 2020 capex is set below $85 million and nearly all directed to maintenance.

Impacted in part by about $16.7 million in one-time goodwill and asset impairments, net losses in 1Q2020 totaled $7.8 million (minus 8 cents/share) versus year-ago profits of $69 million (70 cents).

Revenue for the first quarter of 2020 was $395 million, compared with $546 million in the year-ago period. The decrease was attributable primarily to the “changing job mix as well as decreased pricing for our services.”

A steep decline in well completions activity also hit revenue toward the end of March. The cost of services fell slightly from 4Q2019 to about $301 million. At the end of March, total cash was $143.7 million with debt of $110 million and liquidity of $194.1 million.

“The company continues to work diligently to become current in its filing obligations” with the U.S. Securities and Exchange Commission as soon as it can, with expectations to provide the information by July 15.