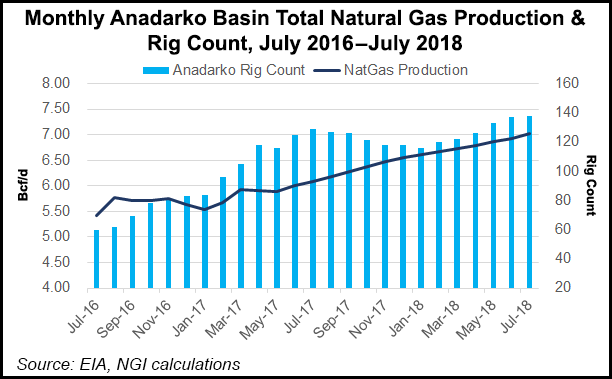 In its complaint, OKOGA said Kingfisher’s ban on the use of produced water in temporary line crossing county road easements, which the county enacted in the spring, is illegal because the regulation of oil and gas operations are the exclusive dominion of the Oklahoma Corporation Commission (OCC). Kingfisher overlays the STACK, aka the Sooner Trend of the Anadarko Basin, mostly in Canadian and Kingfisher counties.

“The fact that temporary lines are only prohibited from crossing county road easements based on the character of the water being transported in those lines makes it clear that the true intent of the produced water ban is not to maintain Kingfisher County roads, but to instead impermissibly regulate and limit the use, reuse and transportation of produced water throughout Kingfisher County,” OKOGA said in the complaint.

The complaint said the OCC issued a memorandum in May stating such bans are illegal, and that the district attorney (DA) for District 4, which includes Kingfisher, agreed. The DA sent a letter to county officials in June urging them to repeal the ban but they refused.

OKOGA warned that Blaine County “has orally denied at least one road crossing permit due to a similar, unwritten produced water ban, and Canadian, Custer and Woods counties are reportedly considering implementing their own produced water bans.” As such, the association asked the court to issue guidance clarifying what counties can and cannot regulate.

OKOGA President Chad Warmington told NGI’s Shale Daily that it was difficult to quantify how much money oil and gas producers were losing from the ban in Kingfisher.

“The loss really comes from the loss of use of the recycling facilities that were built and were designed to move recycled water around the area,” Warmington said Thursday. “It isn’t that there won’t be completions, they’ll just be completed with all freshwater, which isn’t what the State of Oklahoma wants, nor what our companies want to do. They’ve invested in the infrastructure to put in place the recycling facilities and hard, permanent buried lines that get the water in the general area of the completion, and the last mile or two is where you really need the temporary lines.

“To truck the equivalent really wouldn’t be feasible. You would need maybe 5,000 truckloads of water per completion. The alternative is just pump freshwater. That certainly is doable, but it’s obviously not preferred.”

Warmington said he thought “the law is pretty clear,” and predicted OKOGA would ultimately prevail. Still, issuing guidance to the state’s 77 counties was essential.

“The reality is the counties just need to make sure they understand what their proper role is. They have a role in the permitting of the pipelines, placement of the lines, but they don’t get to regulate what’s in the pipelines, and that’s what we’re looking for — just a clarification that the OCC has exclusive regulatory jurisdiction.”

Association of County Commissioners of Oklahoma’s Gene Wallace, executive director, said counties were concerned about liability issues stemming from an accident or a spill from the temporary lines. He said there appeared to be two possible solutions to the problem, but one was more likely than the other.

“If the producers could provide an indemnification agreement to the counties, that would be extremely helpful,” Wallace said Thursday. “It would take that fear away from not only the elected officials in the county but the taxpayers of that county.”

Less likely, he said, “is the thought that if all the lines were run on private property, in an agreement with the private property owner, that would take the county out of the liability circle, also. And there wouldn’t be any encroachment on the county road system.” But he conceded that would require “a tremendous amount of negotiation” between property owners and producers.

“A lot of this has been accelerated by the fact that we’ve had such a growth in some of these activities in some of these counties that they haven’t seen for awhile. These pipes laying out in the road and laying in the ditch line may be a new visual for the counties out there.”