Velocity Central Oklahoma Pipeline LLC plans to construct a crude oil gathering and transportation system in Oklahoma with the equity participation of units of CVR Energy Inc., the company said. It’s the latest of a number of infrastructure projects intended to increase oil/natural gas gathering/takeaway capacity to serve the plays, where some producers are taking refuge from the price dust bowl. 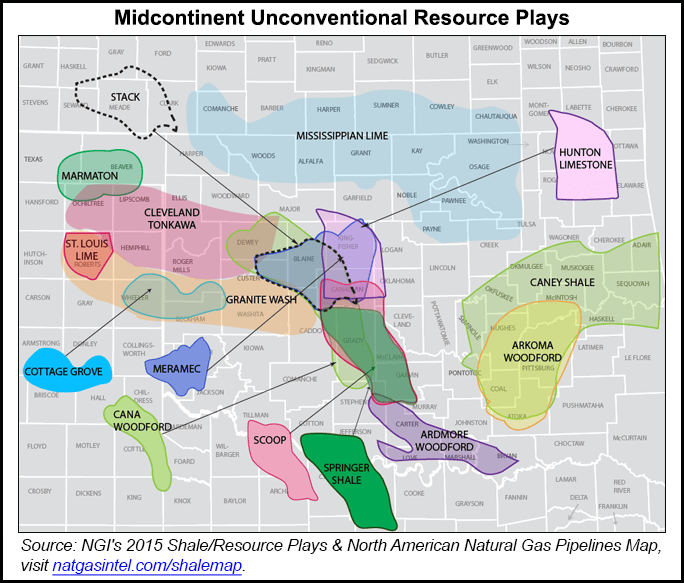 The system would run through the fairways of the South-Central Oklahoma Oil Province (Scoop) and Sooner Trend Anadarko Canadian and Kingfisher (Stack) plays.

CVR, along with its subsidiaries, owns and operates crude oil refineries in Coffeyville, KS, and Wynnewood, OK, with rated capacities of 115,000 b/d and 70,000 b/d, respectively. The refineries are near the Scoop and Stack plays, as well as the Cushing, OK, crude oil hub. CVR also owns and operates crude oil trucking operations throughout the Scoop and Stack, and the new crude pipeline would allow CVR to optimize these resources.

The system would gather and transport crude from Grady, Stephens, Garvin, McClain, Canadian, Kingfisher and Blaine counties to CVR’s Wynnewood refinery and the Cushing hub where the company maintains significant crude storage with pipeline access to its Coffeyville refinery.

“The attractiveness of this crude to Midcontinent refiners, coupled with the reduction in crude transportation costs, provides the producers in Scoop and Stack with a very strong and reliable market,” said Velocity Midstream CEO Rick Wilkerson.

Velocity recently constructed a 100,000 b/d condensate pipeline through the entire core of the Scoop play for Continental Resources Inc. That system has been in operation since June.

CVR’s level of equity participation is yet to be determined.

While commodity prices are depressed and expected to remain so for a while, Oklahoma’s Scoop and Stack still offer attractive economics for belt-tightening producers.

The Scoop and Stack are one leg — along with the Bakken and Eagle Ford shales — of Marathon Oil Corp.’s three-legged U.S. unconventional stool and would be a continuing area of focus for the company (see Shale Daily, Sept. 10). The plays also are getting more attention from Continental Resources Inc. (see Shale Daily, Aug. 6).