Exploration and production companies were told to halt or reduce wastewater injection activity after a magnitude 4.2 earthquake struck northern Oklahoma on Friday. 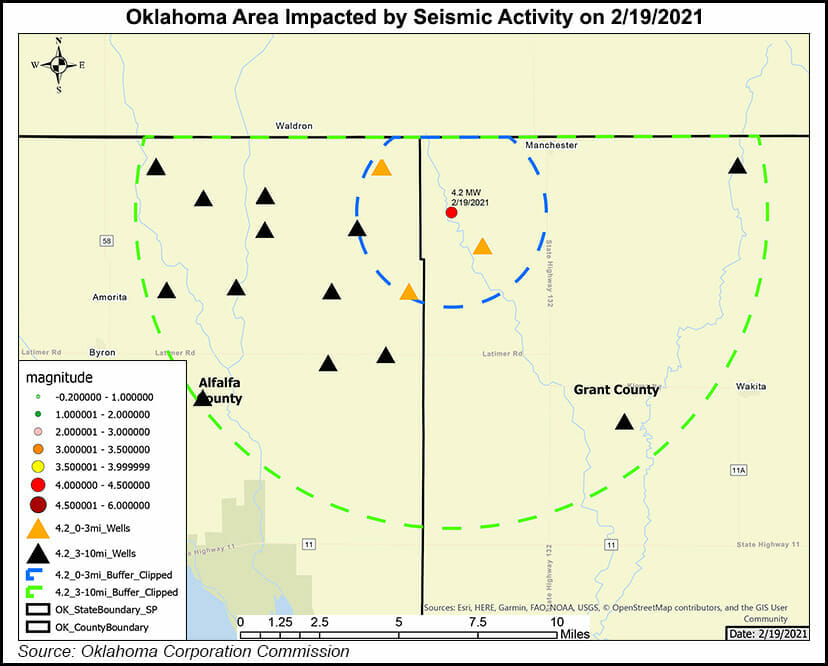 The Oklahoma Corporation Commission (OCC) directed producers with disposal wells in the Arbuckle formation within three miles of the quake’s epicenter to stop operations and those with wells from three to 10 miles to reduce volume by at least 50%.

Friday’s order would reduce wastewater disposal by about 7,000 b/d and impact 16 disposal wells.

“Researchers are in broad agreement that disposal into the Arbuckle formation in parts of Oklahoma can raise risk of induced seismicity,” the OCC said.

Regulators in Oklahoma have been attempting to mitigate induced seismic activity since 2015. They have focused on wastewater injection wells targeting the Arbuckle formation, especially the Mississippian Lime and the Hunton Dewatering play, within a 15,000-square mile area of interest in the state.

According to the U.S. Energy Information Administration, Oklahoma had the fourth-largest gross withdrawals of natural gas among the Lower 48 in 2019. The state accounted for roughly 9% of the nation’s marketed production.