Seeking the cause of an increased number of small earthquakes, Oklahoma officials temporarily shut a disposal well that had been drilled too deep near the Cushing, OK, oil pipeline and storage hub (see Shale Daily, Oct. 15). While not assigning blame, they said the depth of the disposal well could have contributed to the outbreak of seismic activity. 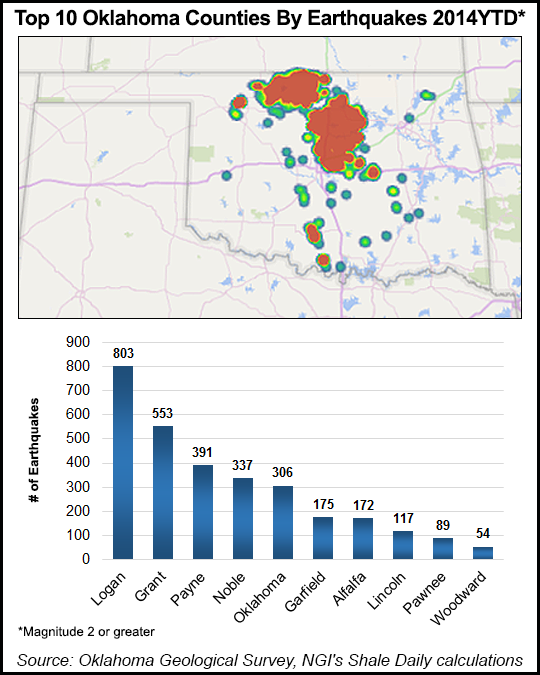 The Oklahoma Corporation Commission (OCC), which oversees oil/natural gas activities in the state, said that taking its action to temporarily halt activity at the Wildhorse disposal well did not mean it was putting the blame for the series of Cushing quakes on the well. In reviewing the disposal wells in the vicinity of the quakes, the OCC found this one was drilled too deep, a spokesperson said.

Injection wells have been identified by the state and U.S. Geological Survey (USGS) as a likely cause for the upswing in small quakes throughout Oklahoma in the past few years (see Shale Daily, Oct. 25, 2013). But their depth, drilling into granite, or the so-called “basement,” has never been an issue because that does not impact groundwater, an OCC spokesperson said.

OCC’s Matt Skinner told NGI the commission has never permitted drilling into the granite, and it is a reason for a noncompliance violation when it is done. The OCC is now auditing all of the wastewater injection wells in the Arbuckle formation — the state’s deepest in the oil/gas plays — and has come up with at least two or three that went into the granite, Skinner said.

While the low-level seismic activity has abated in and around Cushing (pop. 8,000), there is still regular activity elsewhere being picked up by state and USGS monitoring sites, Skinner said.

Last year the OCC adopted a “traffic light” system as recommended by the National Academy of Sciences to monitor the waste water injection wells. Disposal wells within six miles of a quake center of 4.0 magnitude or greater are placed on “yellow light” status, requiring daily volume and pressure recordings. For new wells, the OCC reviews the proximity of faults and seismic activity in the areas for which they are proposed.

“For existing wells, issues that may once have been considered minor now must be addressed immediately, even if they require a well shutdown,” Skinner said.

Under the stepped-up state rules, mechanical integrity tests of the disposal well volumes of 20,000 b/d or more are done annually, rather than the previous five-year requirement. In addition, the data obtained is shared with the Oklahoma Geological Survey seismologists and other researchers.