Oklahoma authorities last Saturday ordered more disposal wells shut down in a 725-square-mile area of the Arbuckle formation following a 5.6-magnitude earthquake that rattled the area near Pawnee, OK. 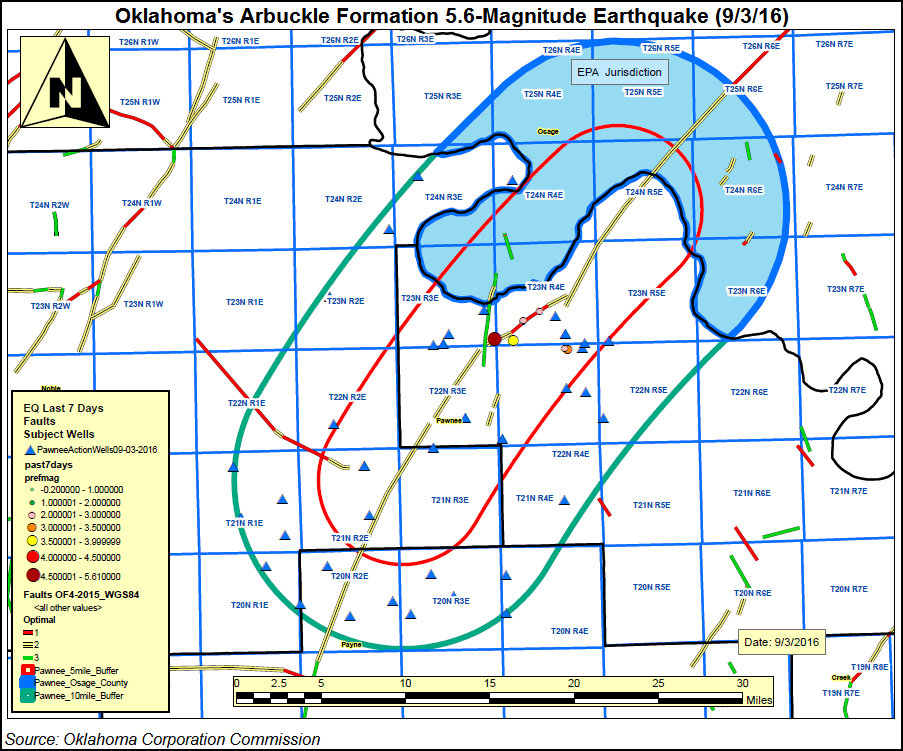 The Oklahoma Corporation Commission (OCC) Oil and Gas Conservation Division (OGCD) moved to shut down all 37 disposal wells in the Arbuckle based on the location of the quake, which hit at about 7 a.m. local time last Saturday. It noted that 211 square miles of the 725-square-mile area is in Osage County, which is outside the state oil/gas division’s jurisdiction.

The oil/gas division is working with the Environmental Protection Agency (EPA), which has sole jurisdiction over disposal wells in Osage, and EPA will determine what action to take in that county.

“All wells are to be shut down within 10 days,” said an OGCD spokesperson, who added that the duration of the shutdowns at this point is undetermined. Seismologists have warned that a large-scale, sudden shutdown of disposal wells could, itself, cause an earthquake.

While noting that no one was seriously injured and damage appeared to be limited, Gov. Mary Fallin declared a state of emergency for Pawnee County, lauding the response by the state’s Department of Emergency Management and Department of Transportation to assess damage of the affected area and to “ensure our state highway and turnpike bridges are safe.”

Oklahoma Independent Petroleum Association (OIPA) officials reiterated the industry’s “whole support” for the continued study of the state’s seismic activity, and they pledged to keep working with the governor’s coordinating council on the issue, Oklahoma Geological Survey, and the OCC. “We are confident that the cooperation between public and private entities has offered a rational and reasonable response to seismic activity concerns,” the OIPA said.

In a letter from Tim Baker, OGCD director, the state declared that an emergency situation was in place with “critical environmental and public safety impacts” resulting from the operation of the saltwater disposal wells.

“The affected area was previously designated as an area of interest based upon the dramatic increase in earthquakes within the immediate area,” Baker wrote, adding that his division had reviewed the report of Saturday’s quake from the Oklahoma Geological Survey. It constituted an emergency situation prompting mandatory steps that needed to be taken immediately.

Baker ordered “a managed shut-in of wells currently authorized to inject to be completed by Sept. 13. The U.S. Geological Survey (USGS) said Saturday’s quake was the strongest since one of the same magnitude struck in November 2011 near the town of Prague, OK; a magnitude 5.1 quake also struck in Oklahoma Feb. 13.

Richard Zeits, an industry analyst who publishes articles on the Seeking Alpha website, predicted that this quake will have “major negative consequences” for the Mississippian Lime play where production results in large volumes of waste water, will bring additional regulatory actions, and provides “some indirect exposure of risk” for the STACK and Cana Woodford plays, although they are not directly affected.

“I view the risk to the STACK and Cana Woodford plays as minor at this point, even through a portion of STACK falls within the ‘area of interest’ outlined by Oklahoma regulators,” Zeits said.

The latest action comes within two weeks of the OCC ordering two disposal wells shut down and intake volume curtailments at another 19 after a pair of earthquakes struck northeast of Oklahoma City (see Daily GPI, Aug. 19). OGCD noted that the state Geological Survey recorded earthquakes measuring 3.7 and 3.9 in magnitude on the Richter scale near Luther and Wellston, OK, on Aug. 16 and 17.

In March, the U.S. Geological Survey said a pair of earthquakes, including one that registered 4.2 magnitude on the Richter scale, hit central Oklahoma (see Daily GPI, March 29), and within weeks of that, Fallin signed a bill clarifying that state regulators — specifically, the OCC — had the authority to declare an emergency in matters pertaining to the oil and natural gas industry and take appropriate action as a result (see Daily GPI, April 21).