The Oklahoma Corporation Commission (OCC) said seismic events that struck the Fairview area last week — including two earthquakes that measured 4.4 and 4.8 in magnitude on the Richter scale — may have been triggered by a power outage created by a winter storm, and ordered operators of 27 wastewater injection wells to reduce their disposal volumes by about 18%. 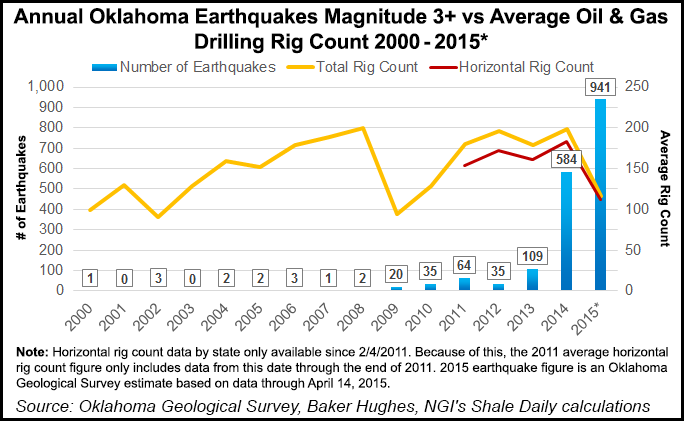 Meanwhile, a group of homeowners from the Edmond, OK, area filed a lawsuit in state court against 12 operators for damage caused by the earthquakes, and are seeking an injunction to permanently shut down at least 16 injection wells.

On Wednesday, the OCC’s Oil and Gas Conservation Division (OGCD) said the 27 injection wells it had ordered to reduce intake volumes lay within an area measuring approximately 36 miles by 20 miles, and all were targeting the Arbuckle formation. The operators were told to cut back from handling 299,372 b/d of wastewater to 244,513 b/d, an 18.3% reduction (54,859 b/d).

According to data from the U.S. Geological Survey, 29 earthquakes of 2.5 magnitude or higher struck Oklahoma over an 18-hour period last week (see Shale Daily, Jan. 7), beginning with a 2.5-magnitude temblor that hit 3.1 miles east of Edmond on Jan. 6, and ending with another 2.5 quake that struck 18.6 miles northwest of Fairview on Jan. 7. The 4.4- and 4.8-magnitude quakes struck within 30 seconds of each other on Jan. 6; the epicenter for both was 19.3 miles northwest of Fairview.

Baker said the OGCD was working a plan that would encompass “a larger portion of the area of interest in the northwestern part of the state” than the current 36-by-20-mile zone. He said the larger plan would be finalized within weeks.

“The data available indicates that a much larger approach to the earthquakes in that entire part of northwestern Oklahoma is needed, and we have been working on such a plan,” Baker said Wednesday. “However, given the recent earthquake activity in the Fairview area, the plan announced today is a necessary step as part of this ongoing process.”

In his Tuesday letter to the operators, Baker said there appears to be “a very close correlation” between the seismic activity that struck the Fairview area last week and power outages that were created by storms that hit the area.

“It is believed that the power outage may have created a situation where a number of producing wells were shut in, then simultaneously came back on line,” Baker said. “When the wells began producing again, this apparently resulted in a tremendous volume of produced water being disposed into the Arbuckle formation at the same time.

“The OGCD recommends that in the future when a power outage of this magnitude occurs, the production volumes be staged or phased in over a period of time.”

Winter storms and flooding compelled Gov. Mary Fallin to extend a state of emergency for all of the state’s 77 counties on Dec. 28, 2015 (see Shale Daily, Dec. 29, 2015). At the time, Fallin’s office said nearly 200,000 homes were without power after freezing rain, ice and sleet struck the western and central parts of the state. Heavy rains also flooded the eastern part of Oklahoma. The state of emergency was originally declared on Nov. 29, 2015.

Last month, SandRidge declined an OGCD order to shut down four of its injection wells, ostensibly on the grounds that it would be uneconomic for it to do so (see Shale Daily, Dec. 21, 2015; Dec. 4, 2015). In response, the OGCD prepared to take legal action against SandRidge in the OCC’s court system.

In District Court for Oklahoma County on Monday, 14 homeowners — 12 residents of Edmond and two from Oklahoma City — filed suit against 12 operators. The complaint alleges that activities performed at a minimum of 16 injection wells induced seismic activity on Dec. 29 and Jan. 1 that damaged their homes.

“The use of disposal wells by the defendants created conditions which, among other things, are the proximate cause of unnatural and unprecedented earthquakes that continue unabated, increasing in both frequency and magnitude with Oklahoma County and elsewhere in the State of Oklahoma, which have damaged plaintiffs and others and threaten to do so in the future,” the lawsuit says.

The OGCD began ordering operators to either shut down or curtail intake volumes at injection wells in March 2015, shortly before scientists with the Oklahoma Geological Survey (OGS) attributed the increase in seismic activity to injection wells targeting the Arbuckle Formation, which closely overlies the crystalline basement (see Shale Daily, April 22, 2015; April 2, 2015). The OGS said the disposal of extremely salty water — a byproduct of oil and gas production, not the mostly freshwater used for hydraulic fracturing (fracking) — is responsible for the quakes (see Shale Daily, Jan. 5).