A slowdown in oil and gas activity in Oklahoma between late 2014 and late 2016 created a $1.5 billion, or 15.4%, loss in total state tax revenue, according to a report released last month by the State Chamber of Oklahoma. 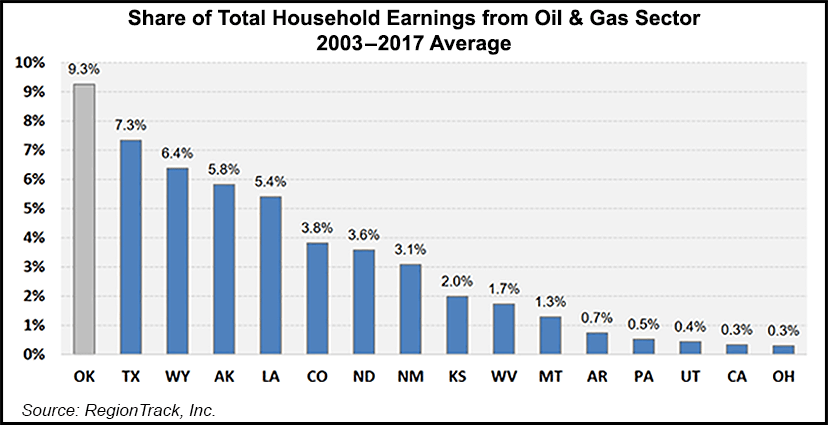 The report, conducted by researchers with RegionTrack Inc., added that the 2014 oil price collapse and subsequent two-year energy recession caused actual tax revenue to be $2.25 billion, or 23.7%, below what was expected to come into the state’s coffers.

“This report highlights the impact depressed oil and natural gas prices have on state government,” President Chad Warmington of the Oklahoma Independent Petroleum Association-Oklahoma Oil and Gas Association (OIPA-OKOGA), told NGI’s Shale Daily. He said the report “offers further proof that overall state tax revenue is highly sensitive to changes in oil and natural gas industry activity because the industry has a significant impact in nearly every tax stream collected by the state.

Researchers found that during the recession, the state’s oil and gas industry shed 21,500 workers and lost $8.9 billion in earnings. An additional 48,300 jobs and $22 million in earnings were lost across other sectors of the economy.

While Oklahoma remains one of the top oil and gas producing states, researchers said its overall economy is “highly sensitive to activity in the oil and gas sector.” They estimate that an extended slowdown in the energy sector could put a net 25% dent in projected state tax revenue.

The report found the share of earnings in Oklahoma from the oil and gas sector reached a peak of 15.6% in 2008 and averaged 9.3% of total household earnings from 2003-2017. The 9.3% figure was tops among the 16 major oil and gas producing states for that time period.

Last year, state House Bill 1010 was enacted into law, raising production taxes for all new and existing wells to 5% for the first 36 months of production, up from a previous rate of 2%. All production then reverts to a 7% rate.

The report also found that Oklahoma’s combined effective severance and ad valorem tax rate is projected to rise to 6.4% in FY2019 from 5.4% under the former severance tax rate. The state will now rank eighth among the top 16 producing states in that metric from 11th place.

Warmington said the report’s findings show the state must broaden its tax base and follow Republican Gov. Kevin’s Stitt’s plans to expand the state’s Rainy Day Fund. Such moves would ensure that “tax dollars in times of higher prices are available to fund core government services in the inevitable times of lower prices,” Warmington said.

Last month, the U.S. Energy Information Administration estimated that natural gas production in the state’s Anadarko Basin is expected to remain flat in April at 7.67 Bcf/d, while oil production is expected to decline marginally month/month to 581,000 b/d. Data from Baker Hughes, a GE Company also showed the state lost two rigs for the week that ended March 22.

OIPA and OKOGA agreed to merge into a single organization last November.

With the hottest week of the summer just around the corner, natural gas futures rebounded early Monday. The September Nymex gas futures contract was flirting with the $4.000/MMBtu mark again, trading 6.3 cents higher at $3.977 at around 8:45 a.m. ET. Long-range outlooks showed stronger ridging in the eastern United States next week, giving a…