Oklahoma regulators on Tuesday implemented the largest volume reduction plan yet for oil and natural gas disposal wells in the Arbuckle formation in the western part of the state, which covers 5,281 square miles and 245 disposal wells. Meanwhile, the Sierra Club is suing Chesapeake Energy Corp., Devon Energy Corp. and New Dominion LLC for triggering quake activity in Oklahoma and Kansas. 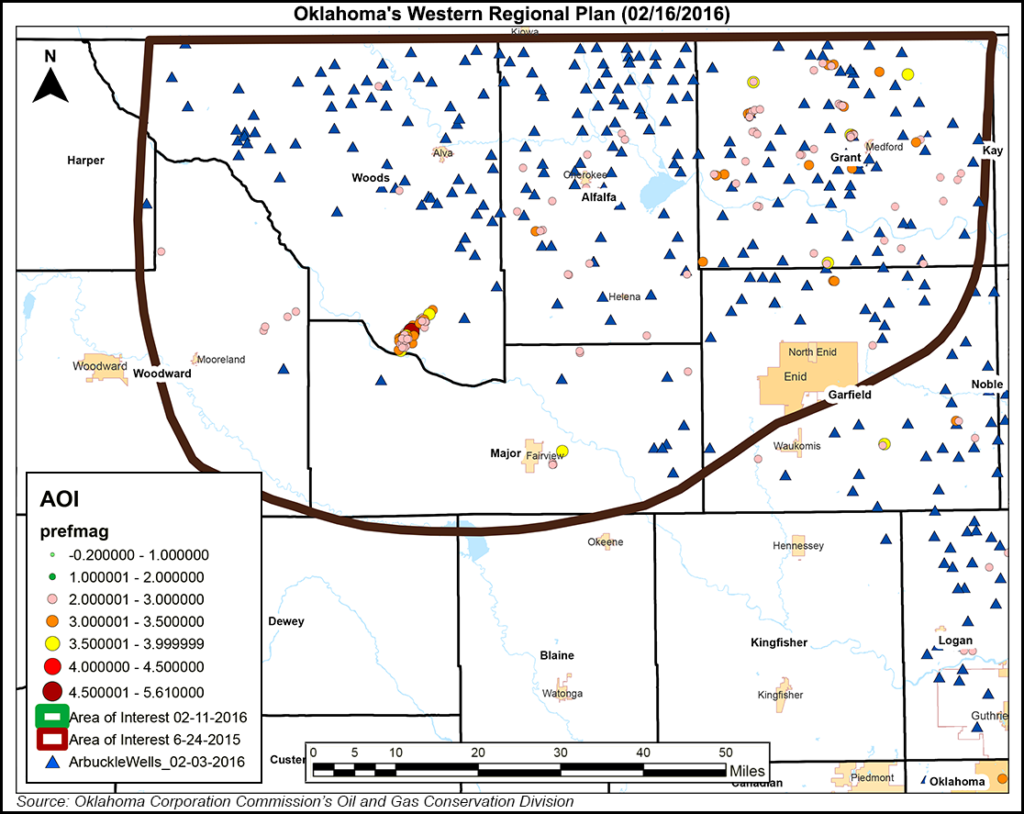 The plan by the Oklahoma Corporation Commission’s (OCC) Oil and Gas Conservation Division (OGCD) calls for cutting drilling wastewater injections by nearly 500,000 b/d, or about 40%, and in some cases moving into areas that have not yet experienced earthquakes.

The plan would be phased in over four stages and two months as recommended by researchers, who caution against sudden pressure changes. Meanwhile, staff continues to work on other areas of the state, helped by recent cash infusions.

OGCD has emphasized that researchers mostly agree that wastewater injection into the Arbuckle formation poses the largest potential risk for earthquakes in the state. Most of the wastewater does not come from hydraulic fracturing (fracking) operations, but rather from producing wells. The water exists in the producing formation and comes up with the oil and natural gas.

With increasing swarms of small quakes in recent years, the OCC and state officials have steadily ratcheted up their response to wastewater injection in the oil and gas fields (see Shale Daily, Dec. 4, 2015). Baker reiterated on Tuesday that the continuing quake activity demands a regional response.

“We have taken a number of actions in the Medford, Fairview, and Cherokee areas,” Baker said. “However, there is agreement among researchers, including our partners at the Oklahoma Geological Survey (OGS), that the data clearly underscored the need for a larger, regional response. That is why, even as we took actions in various parts of the region in response to specific earthquake events, we were already working on a larger plan. ”

Although the plan is a direct response to the continued seismicity in the area, the action also will add areas that are not yet experiencing major earthquakes.

“The wells covered in this plan include those along the western area of the plan’s boundaries where there has not yet been major earthquake activity,” Baker said. “This plan is aimed not only at taking further action in response to past activity, but also to get out ahead of it and hopefully prevent new areas from being involved.”

Emergency funding from Gov. Mary Fallin and a grant from the Oklahoma Energy Resources Board and the Groundwater Protection Council are enabling the OCC to add critical equipment and staff. “As we move forward, we will continue to focus on regional approaches as supported by the latest data,” Baker said.

Since March 2015, the OGCD has ordered operators of injection wells that handle wastewater from oil and gas operations to either shut down or curtail intake volumes. Scientists with OGS attribute the increase in seismic activity to injection wells targeting the Arbuckle formation, which closely overlies the crystalline basement (see Shale Daily, Jan. 11).

OGS concluded that the disposal of extremely salty water, not the mostly freshwater used for fracking, is responsible for the quakes (see Shale Daily, Jan. 5).

Also on Tuesday the Sierra Club added to the growing controversy over the alleged tie between fracking and increased earthquake risks with a lawsuit accusing units of Chesapeake, Devon and New Dominion of causing tremors in Oklahoma and Kansas.

The environmental group said in a complaint filed in U.S. District Court in Oklahoma City that the three producers’ practice of injecting liquid oil and gas waste into deep wells contributed to the spike in earthquakes last year, to more than 5,800 from an annual high of 167 between 1977 to 2009.