The small induced earthquakes in Oklahoma linked to oil and gas activity have eased, but the risks from seismic events remain high, according to a study by the U.S. Geological Survey (USGS). 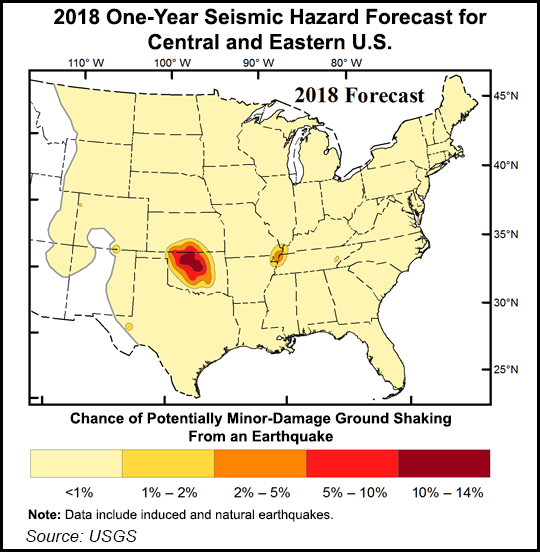 The average number of tremors of at least 2.7 magnitude or greater declined from 5.41/day in 2015 to 1.18/day in the first three months of this year, the USGS said. Last year 2.7 magnitude tremors declined to 1.68/day while 3.0 or greater magnitude events fell to 0.82/day. An abstract was published in Seismological Research Letters.

“Even though rates declined over the past three years, the short-term hazard for damaging ground shakes across much of Oklahoma remains at high levels due to continuing high rates of smaller earthquakes that are still hundreds of times higher than at any time in the state’s history,” USGS said.

The Oklahoma Corporation Commission’s Oil and Gas Conservation Division (OGCD) and the Oklahoma Geological Survey (OGS) issued a joint statement after the study was issued indicating there is “room for debate” as to the level of future quake risks. However, two things are clear, they said. Oilfield disposal wells have increased the quake risks, and the state still is experiencing a lot of quakes.

“Both are unacceptable,” said the agencies. “Oklahoma is not out of the woods yet.” Based on the latest USGS data, “further actions can be expected…We hope the resources will become available for furthering this critical effort, including a statewide seismic network and funding for the OGCD’s Induced Seismicity Department.”

No details were provided as to what further actions could be taken.

In late February the OGCD issued seismicity protocols for Oklahoma’s two main producing regions, the SCOOP and the STACK, i.e. the South Central Oklahoma Oil Province and the Sooner Trend of the Anadarko Basin, mostly in Canadian and Kingfisher counties.

Under the protocols, all operators working within a 15,000-square mile area of interest in the stacked plays must certify to regulators that they adopted a seismicity response plan related to any potential seismic activity within a 3.1-mile radius of completion operations. Operators conducting hydraulic fracturing also are required to have access to real-time seismicity readings.