In its latest move to curb seismic activity, the Oklahoma Corporation Commission’s (OCC) Oil and Gas Conservation Division (OGCD) ordered more than 400 wastewater injection wells targeting the Arbuckle Formation to reduce their disposal volumes by 40% below 2014 levels over the next two months. 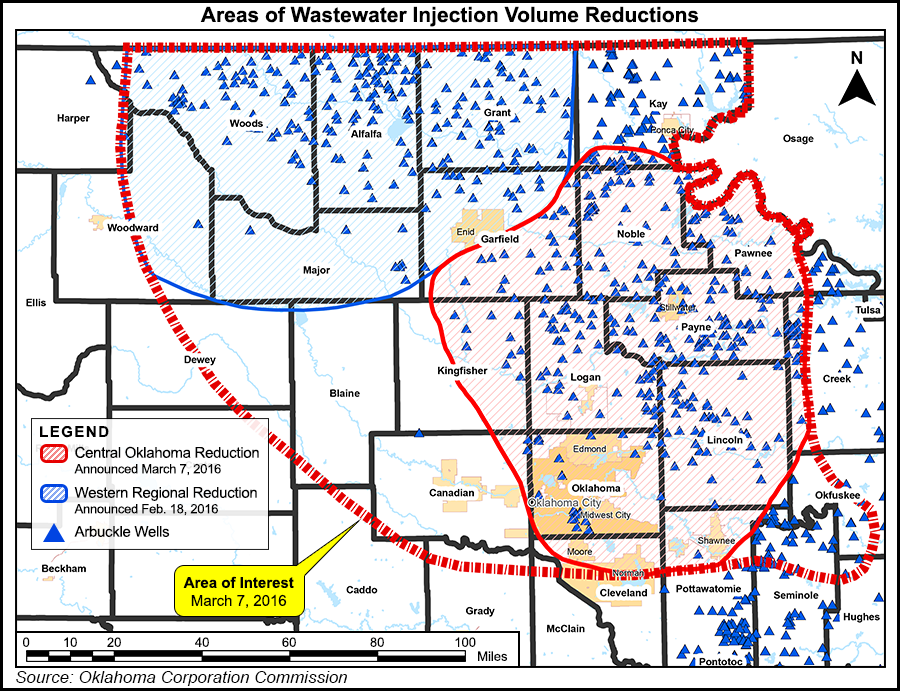 The OGCD, in a separate action Monday, also expanded its “area of interest” (AOI) in the state, effectively placing restrictions on more than 100 additional disposal wells in areas that have not yet recorded major earthquake activity.

According to the OGCD, its latest plan — officially, the Central Oklahoma Volume Reduction Plan — covers approximately 5,200 square miles and includes 406 disposal wells, which collectively have 126 operators. The plan calls for reducing intake volumes by more than 300,000 b/d, with a goal of bringing total annual volumes down to 40% below 2014 levels.

Specifically, the volume reductions will be implemented in four stages over a two-month period, in order to avoid sudden pressure changes, which can also induce earthquakes (see Shale Daily, Jan. 14). Operators will be required to make 25% of their ordered reductions by March 28, followed by additional 25% cuts by April 17, May 7 and May 28.

Going forward, disposal wells in the Central Oklahoma Volume Reduction area will be limited to the lesser of 20,000 b/d or two times the reported daily average. Disposal wells may also not exceed a 30-day average of 15,000 b/d. Wells that have ceased operation under previous OGCD plans shall remain shut-in.

Under the AOI expansion, disposal wells targeting the Arbuckle that are not already covered by previous AOI rules shall begin recording disposal volumes on a daily basis, and will report them to regulators and researchers on a weekly basis. Operators may be required to submit more frequent disposal reports if regulators or researchers request them, the OGCD said.

The division also suspended administrative approval for disposal well applications in the AOI. Applications must now go through the OCC’s court system, with approval granted only by a majority vote of the OCC’s commissioners. Any permits approved in this manner would be limited to six months, and would contain requirements for seismic monitoring and regular testing. Also, the OGCD has the authority to shut in the wells without a court hearing.

“This will result in 118 more Arbuckle disposal wells being covered by so-called ‘yellow light’ earthquake precautions,” Baker said, adding that the AOI expansion “is a proactive move to get ahead of the earthquake activity.

“The central Oklahoma volume reduction plan covers an area where we have taken numerous, localized actions over the past 12 months, such as in the Cushing, Crescent, and Edmond areas. But the research and data has grown to provide the basis needed to both expand into a regional approach for volume reduction and increase the size of the AOI.”

The OGCD began ordering operators to either shut down or curtail intake volumes at injection wells in March 2015, shortly before scientists with the Oklahoma Geological Survey (OGS) attributed the increase in seismic activity to injection wells targeting the Arbuckle Formation, which closely overlies the crystalline basement (see Shale Daily, April 22, 2015; April 2, 2015). The OGS said the disposal of extremely salty water — a byproduct of oil and gas production, not the mostly freshwater used for hydraulic fracturing — is responsible for the quakes (see Shale Daily, Jan. 5).

“Our working relationship with the OGS continues to bear more fruit, greatly helped by the fact that we have been able to add staff to the earthquake effort as a result of the emergency funding from Gov. Fallin [see Shale Daily, Jan. 29] and grants from the Oklahoma Energy Resources Board and the Groundwater Protection Council,” Baker said. “We have also begun the process of a huge upgrade in our computing power, which will give us far more powerful tools and provide more data to researchers.”

Monday’s announcement of the Central Oklahoma Volume Reduction plan and the AOI expansion are the OGCD’s 18th and 19th actions taken since March 2015. The OGCD said daily average volumes have since declined by more than 1 million b/d.