Weeks away from the one-year anniversary of Winter Storm Uri, Oklahoma regulators have approved a plan that would lower and extend the natural gas costs incurred by consumers following the deadly storm. 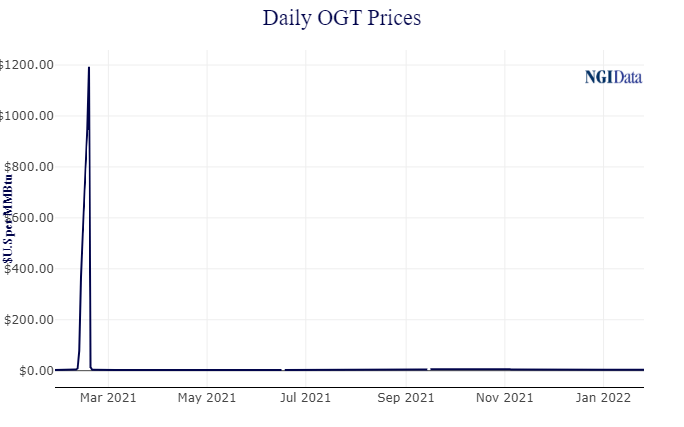 The Oklahoma Corporation Commission (OCC) order issued earlier in January allows the costs to be securitized under a law passed by the state legislature after last February’s winter emergency event. Without the securitization, it is estimated that the gas costs owed to utility Oklahoma Natural Gas (ONG) would have cost an average residential consumer $15.32/month.

“This means that the monthly impact to ratepayers will be far less than it otherwise would have been,” OCC Chairman Dana Murphy said. “Securitization allows the cost to be spread out over up to 25 years, dropping the monthly payment to an estimated $7.82 for the majority of ONG customers.”

Actual bills incurred by consumers would depend on usage and other fees.

The unprecedented freeze resulted in historic gas prices in a market outside of the OCC’s control, Murphy noted. The Federal Energy Regulatory Commission, the Oklahoma Attorney General and other regulatory agencies are investigating the event, and “if something is found that could lower costs to ratepayers, that will be instituted,” Murphy said.

NGI data showed that wholesale natural gas prices at the OGT pricing location, otherwise known as Oneok Gas Transmission, traded as high as $1,250/MMBtu during the height of the storm. Other locations in the Midcontinent and Texas swelled into the hundreds.

The OCC chairman ordered ONG to credit customers with any proceeds, government grants or other funding sources received for the costs of the winter weather event. ONG is the largest natural gas distributor in the state, serving nearly 900,000 residential, commercial and industrial customers.

“Of key concern now,” according to Hiett, “is what is being done to reduce the chances of this happening again? The commission has held a number of hearings on this since the storm, and it’s an ongoing effort.”

OCC did not approve a proposal by ONG to impose a termination fee on customers who canceled their natural gas service to switch to a different fuel source.

CenterPoint Energy Inc. subsidiaries in Minnesota and Texas also are recovering their fuel costs from Uri by way of securitization. In Texas, estimates suggest that the price spike during uri resulted in about $1.14 billion in unexpected costs for gas customers. CenterPoint’s Texas customers’ monthly rate relief charge is expected to be $2.50-5.00/month. Had the cost recovery taken place via the traditional mechanism of the monthly purchased gas adjustment, charges could have been as much as $40/month for one year, according to CenterPoint.