Oklahoma toppled Texas from the No. 1 spot as the most attractive jurisdiction in the world for oil and natural gas investment, a global survey of energy executives by the Fraser Institute found. Meanwhile, Alberta, long the heart of Canada’s energy industry, has lost its allure. 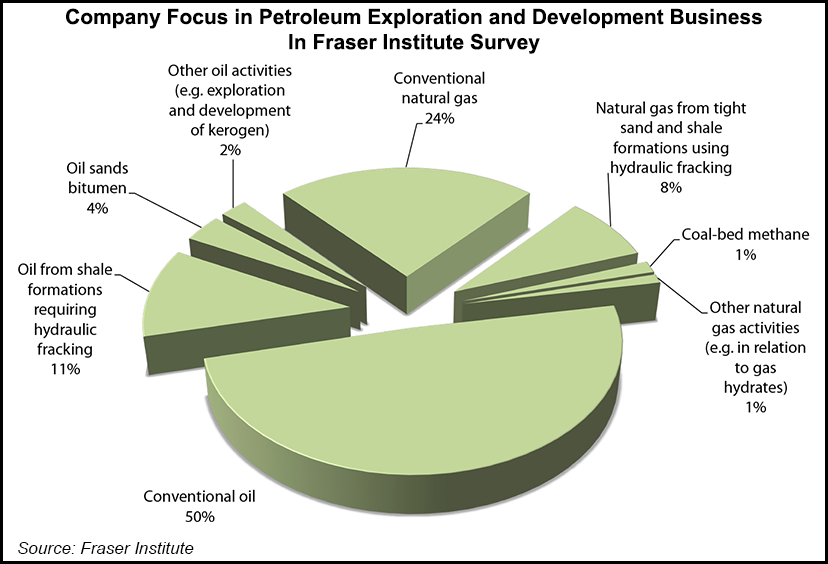 The annual survey by the Canadian public policy think tank ranked 96 jurisdictions worldwide based on their barriers to investment (e.g. taxation, costly regulatory obligations and uncertainty over environmental regulations), as well as the volume of oil and gas reserves. A total of 381 individuals completed the questionnaire this year, providing enough data to evaluate 96 jurisdictions.

Oklahoma, long an energy hot spot but even hotter today because of its myriad stacked reservoirs, topped Fraser’s Policy Perception Index (PPI), a comprehensive measure of the extent to which policy deters upstream investments that include exploration and production (E&P). U.S. states comprised eight of the top 10 jurisdictions in the PPI around the world, with Texas at No. 2, followed by Kansas, Wyoming, North Dakota, Mississippi, Utah and Montana.

By region, Australia finished second to the United States, while Canada fell to third, followed by Asia. Globally, every region except the Middle East and Europe experienced declines in investment “attractiveness,” the survey found.

“With oil and gas sector confidence declining around the world, it’s especially important for policymakers to pursue competitive tax and regulatory regimes, and to have stable environmental protections that attract, not deter, petroleum investments,” said co-author Taylor Jackson, a Fraser senior policy analyst.

“The Alberta government has introduced policies that are confusing and possibly costly, creating uncertainty for the oil and gas industry, which can invest elsewhere,” Green said.

Alberta dropped 18 spots year/year to 43rd on the PPI. Saskatchewan, ranked seventh last year, moved into the No. 4 slot behind Oklahoma, Texas and Kansas. In the 2014 survey, Alberta was in the top 10, but it fell last year to No. 25. British Columbia maintained the No. 39 position.

“And with President-elect Donald Trump supportive of Keystone XL, Alberta’s score could improve in future years,” the authors said of the long-stalled pipeline that would move heavy oil to the Gulf Coast. However, the province still earned low marks for regulatory duplication and inconsistencies, high taxation and uncertain environmental regulations.

In a separate ranking, which only includes jurisdictions with the world’s largest reserves, Texas retained its No. 1 spot among the 12 globally, followed by the United Arab Emirates, Qatar, Alberta and China. Alberta had been No. 2 in last year’s survey.

“Increasingly Alberta is competing with jurisdictions that are more attractive for investment from the oil and gas sector — a worrying trend that will likely negatively impact Canadian jobs and government revenue,” Jackson said.