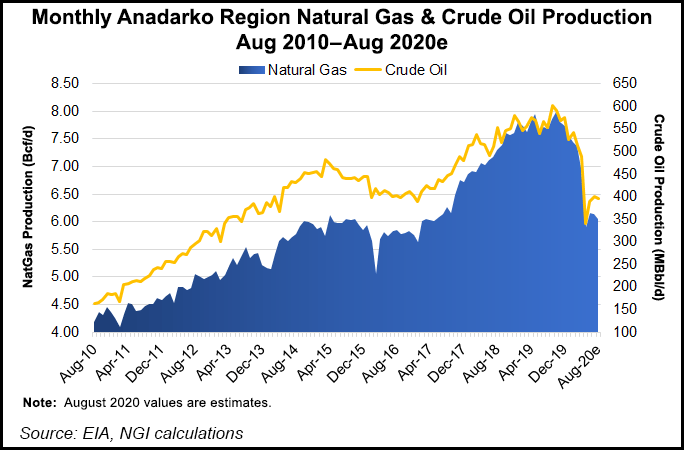 The Oklahoma Corporation Commission (OCC) has voted to leave a proration formula in place that limits natural gas production from some of the state’s most prolific wells.

In a 2-1 vote, with Chairman Todd Hiett and Commissioner Dana Murphy in support of the current formula, operators are required to limit an unallocated gas well’s absolute open flow to 50%, or cap the maximum allowable production at 2 MMcf/d, whichever is more. Oklahoma is home to an estimated 40,000-50,000 unallocated gas wells, which produce outside of specific fields, such as the Anadarko Basin. Regulators separately allocate output from these wells based on market demand.

Hiett said the decision had been difficult as reducing output could impact the state’s revenue. However, “I feel confident that this order today is the right decision, going forward. We can all learn together as this moves forward.”

Vice Chairman Bob Anthony was in dissent. “With federal unbundling, there is no longer much in the way of limited merchant pipeline market demand to allocate through production allowables,” he said. “If Oklahoma curtails production, other states can fill in the gap on the national level.”

Most of the state’s producers had argued for maintaining the status quo, including Oklahoma City-based Devon Energy Corp. “We believe market forces are already in play to more effectively balance the Oklahoma natural gas market,” wrote Executive Vice President David G. Harris, who oversees exploration and production. “While Devon believes no action on proration is necessary on a go-forward basis, the responsible action today is to make no changes for at least six months to better observe the effects of market forces.”

Continental Resources Inc., also headquartered in Oklahoma City, was in favor of changing the formula. “As the largest operator in Oklahoma, we will be disproportionately impacted by this policy change,” executives told the commission. “However, we feel this change is necessary to maintain proper market balance of the state’s natural gas production.”

At a public technical conference in July, some natural gas producers operating in Oklahoma advocated for setting the allowable rate at up to 100% of the CAOF, or 10 MMcf/d. Others favored a return to 65% of the CAOF, or 2 MMcf/d. Some proponents of the 50% proration formula argued that the global gas oversupply existed before the Covid-19 pandemic, and while rig counts are down and activity has slowed, the state’s gas market remains oversupplied. Advocates of raising the proration rate, with whom Anthony concurred, argued that lower rates and regulatory uncertainty would create disincentives to drill new wells. They also said it would give companies incentives to divert their resources to states with fewer restrictive rates, making Oklahoma less competitive in the national market.

According to the U.S. Energy Information Administration (EIA), Oklahoma had the fourth-largest gross withdrawals of natural gas among the Lower 48 in 2019. Additionally, the state accounted for roughly 9% of the nation’s marketed production. The EIA also showed the predicted total consumption of natural gas could average 82.4 Bcf/d in 2020, down 3% from 2019.

Although the EIA noted that the average spot price for the fuel at Henry Hub averaged $1.77/MMBtu in July, it predicted the average price would increase to $2.11 in September, and to $3.14 in February because of increased demand and reduced production.