Oklahoma regulators are cutting back the volume of drilling wastewater that operators may inject into disposal wells in two counties as a continued “progressive” response to induced seismicity that has been blamed on such wells. 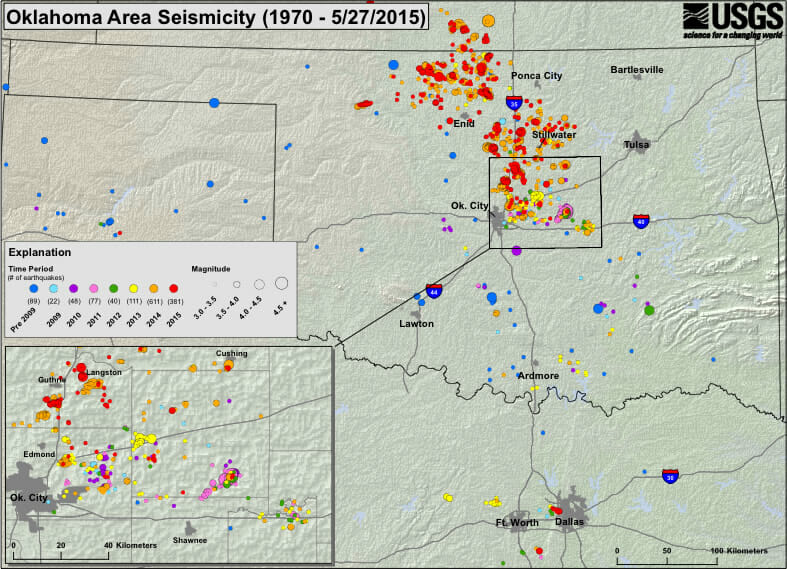 The Oklahoma Corporation Commission’s (OCC) Oil and Gas Conservation Division (OGCD) plan affects northern Oklahoma and southern Logan counties. Operators will have a 60-day period during which injection volume will be reduced 38%, or about 3.4 million barrels under the 2014 total. Such a reduction will bring total volume for the area to a level under the 2012 total by about 2.4 million barrels. The area saw its sharpest rise in seismicity start in late 2012.

The move falls under the commission’s “traffic light system,” which was established in 2013 in response to seismicity and wastewater disposal wells. Saltwater disposal into the Arbuckle formation is believed to be responsible for a dramatic increase in seismic activity.

“This is an issue completely outside the scope of the experience of not only this agency, but all our partner agencies and stakeholders as well,” Murphy said. “There was a time when the scientific, legal, policy and other concerns related to this issue had to first be carefully researched and debated in order to provide a valid framework for such action. That time is over.

“Based on the research and analysis of the data compiled, we must continue to take progressive steps, and do so as quickly as possible as part of the continuing efforts to resolve this complex and challenging issue.”

According to Oklahoma Geological Survey (OGS) data cited by OCC, earthquake activity of magnitude 2.5 or greater on the Modified Mercalli Intensity Scale has increased significantly since 2012 when there were only two such quakes. In 2013 there were 14. The number grew to 359 last year, and year-to-date through July there have been 253 such quakes.

The Mercalli measurement is different from the Richter Scale in that it measures the effects of seismicity on individuals’ experiences and on structures and surroundings. It is thought to be more meaningful to lay people than the Richter. The Mercalli scale ranges from one to 10; levels two and three are both described as “weak.”

The area of interest is about 122 square miles around the center mass of an earthquake “cluster.” Late last month, two injection wells were voluntarily shut in and another saw the volume of injections cut by half (see Shale Daily, July 29).