Tesco Corp., an oilfield services company based in Houston, said the collapse of world oil prices has caused several of its customers to either delay or cancel requests for its services, and it warned that its financial results for 4Q2014 and the full-year 2015 will be affected. 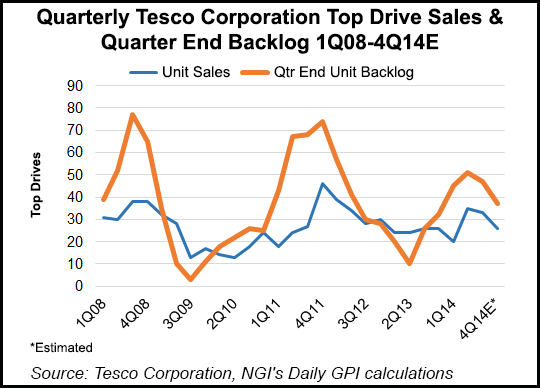 On Monday, Tesco — which designs, manufactures and provides technology-based solutions in the upstream — said the decline in energy prices had prompted some of its customers to rethink their drilling activity and capital expenditures. As a consequence, some of its customers have requested that delivery of its products be deferred from 4Q2014 until 2015.

“We have also experienced tubular service activity declines, primarily in North America as well as some temporary activity disruptions in Mexico and Argentina. Russia remains slow as its economic conditions continue to decline. We believe that customers in other international markets served by Tesco will base their decisions on longer term factors and their response to current market conditions is expected to be more measured.”

Tesco said it does not expect its 4Q2014 revenues to improve sequentially, and are expected to be closer to revenues from the first half of 2014. Profits in the fourth quarter are also expected to be hit.

“We will use this market condition as an opportunity to lower our cost structure and streamline our organization,” said CEO Fernando Assing. “This will lower costs in 2015 and will improve our leverage when the market recovers.

“We are well positioned to deal effectively with the uncertain times and our priority remains cash generation and preservation until such conditions improve. Our strong balance sheet provides stability and flexibility and our technologies, safety and quality will continue to provide the differentiation required in the marketplace.”

Tesco announced Friday that Julio Quintana had resigned as president and CEO, and that Assing had been appointed to the posts. Both moves were part of a previously disclosed executive succession plan. Quintana will remain an employee until his retirement on Jan. 1.