Oil and natural gas operators are ramping up activity in Latin America, according to the three biggest names in oilfield services. 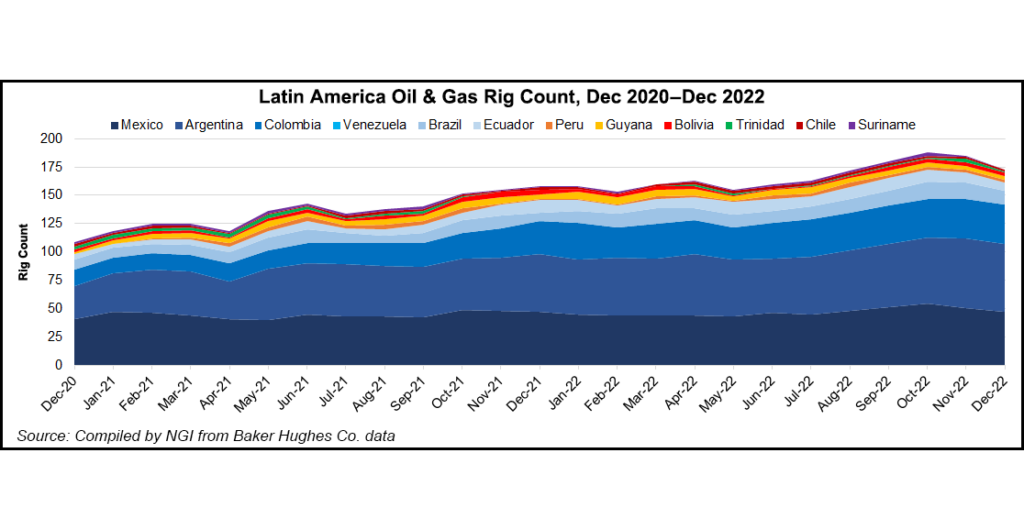 The management teams of SLB Ltd., Baker Hughes Co. and Halliburton Co. each reported upticks in revenue and activity in the region for the fourth quarter of 2022 and the year as a whole.

The trend is likely to continue, according to SLB CEO Olivier Le Peuch.

“Markets are poised for strong growth in the Middle East and Latin America geographically, and more broadly in offshore and in gas,” he told analysts during the firm’s fourth quarter 2022 earnings call.

For 2023, SLB is targeting year/year international revenue growth in the high teens, “excluding Russia, which is set to decline this year,” Le Peuch said. “We expect the highest growth rates to be realized in the Middle East and in offshore markets, particularly in Latin America and in Africa.”

Latin America revenue for SLB totaled $1.62 billion for the fourth quarter, up from $1.2 billion in 4Q2021 and $1.51 billion in 3Q2022. The 7% sequential increase was “due to higher well construction revenue from increased drilling activity and improved pricing, mainly in Mexico and Brazil,” management said. Increased production systems sales and higher asset performance solutions (APS) project activity in Ecuador also contributed.

Revenue from the well construction segment rose 5% sequentially to $3.2 billion “due to strong activity from new projects and solid pricing improvements internationally, particularly in the Middle East and in Latin America,” Le Peuch said.

“In Latin America and West Africa, offshore activity is driving growth in several countries and creating opportunities across our diverse portfolio,” he told analysts during the firm’s latest earnings call.

Halliburton Co., for its part, reported Latin America revenue of $945 million in 4Q2022, up 12% sequentially, “due to higher activity across multiple product service lines in Mexico, higher completion tool sales in the region, increased pressure pumping services in Argentina and improved well construction services in Colombia.

“Partially offsetting these increases was lower fluids activity in Guyana.”

On a year/year basis, Halliburton’s quarterly revenue from the region was up 41.3%.

“In 2023, we expect international activity to grow at least mid-teens, with most new activity coming from the Middle East and Latin America,” CEO Jeff Miller told analysts during the earnings call. “If this up-cycle continues, I believe that we will see substantial growth in all international markets, both onshore and offshore, led by development activity and increased spend at the well bore.”