Contrary to the optimism some oilfield services companies have expressed about finding a solid labor pool once the oil and gas upturn begins, many former employees have no intention of ever returning, according to a survey by Evercore ISI. 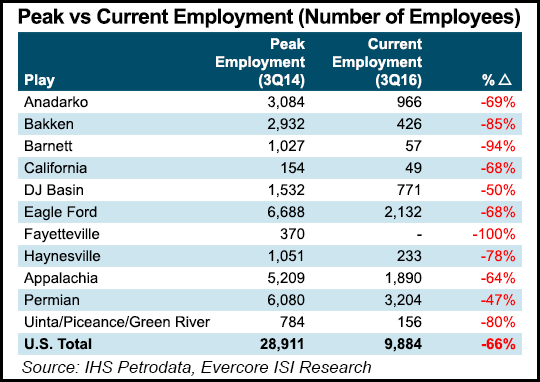 “Contrary to what hiring managers think, many workers are NOT coming back to the oilfield,” Evercore analyst James West said. “Of the respondents that officially retired…only one mentioned the possibility of coming back as a part-time contractor, just to give him ‘something to do.’ As for the individuals that did not re-enter the oilfield, an overwhelming majority have turned their backs on the patch altogether.”

West and his team issued a survey last month of people who had been employed by some of the larger diversified oilfield services (OFS) providers in North America (NAM).

A “healthy” number of responses (40) were from professionals who had worked in a “wide range of functional capacities, including engineers, mechanics, rig hands, electronic techs, sales managers and even a segment vice president,” West said. “Results from the survey corroborate our thesis that labor constraints will be an ongoing bottleneck that will slow and prolong the NAM activity recovery.”

The large-cap companies should benefit from having more financial flexibility to attract and train talent as the market recovers, but smaller OFS operators may struggle to staff incremental crews, hurting them in capturing additional market share.

“Although counter-intuitive, given the 350,000-plus laid off workers that could theoretically go back to the oilfield, the breadth and depth of job cuts during this particular downcycle will make adding quality talent difficult, but crucial to a company’s success in the second half of 2016 and beyond,” West said.

Beyond “tripping pipe and pumping sand,” opportunities abound for people who lost their jobs — but they may not be the jobs that an unemployed oilfield worker wants to return to.

“A solid 78% of respondents have successfully found employment, with 19% of group signing on to other oilfield-related work,” the Evercore survey found. Aside from two operations/sales managers who had been employed in similar roles at small OFS companies, most of the people that reentered the oilfield were hired for “lower-paying, nontechnical” jobs, such as fuel pumpers for field equipment and sand haulers for proppant companies.

“These respondents feel more ‘underemployed,’ but accepted the relative pay cut in lieu of underwhelming unemployment benefits,” West said. Eleven percent of those responding found employment in the construction industry, considered conducive to former oilfield workers who had functioned in labor-intensive operator roles.

“Many of these field hands ruled out relocation for employment, since they typically had established families in the oilfield communities in which they worked, versus engineers that had been assigned to locations many miles away from their respective universities, friends and family,” West said.

“Labor will be a challenge, certainly,” Williams said (see Shale Daily, July 28). “Obviously, this is a very painful time for this industry and for this company to lose so many talented people. Attracting those folks back…and grow with us is going to be challenged. “

Of those people responding to Evercore’s survey, about 11% have transitioned to engineering consulting, where oilfield experience can be leveraged for technical consulting. Another 8% have moved into the chemical sector, also tangentially linked to the oilfield and geographically concentrated in the Gulf Coast region.

However, more than one-fifth (22%) now work in “other” industries that include agriculture, aerospace, tech/startup, alternative energy and financial services. Some also have retired.

More than three-quarters (79%) of the people surveyed said they would not return to an “equal or better role” in the oilfield.

“Interestingly, 22% of the survey respondents are still unemployed, only half of which would agree to return to their oilfield careers,” West said. “For the other half, the cyclicality of the industry, and the prospect of having to ‘start their careers from square one’ is discouraging enough to continue the job search for more stable alternatives.”

Several of the unemployed respondents disclosed that they had signed onto a class-action lawsuits against their previous OFS employers, claiming overtime pay was withheld to conserve costs in the downturn. Some said they would not return to the oilfield “as a matter of principle.”

Evercore hosts a “Legends of the Oilfield” series, featuring dinners with “OFS greats,” West said. The legends have excelled in a “range of field and managerial roles over many years in the patch, and like dendrochronology uses ring patterns to estimate the age of a tree, oilfield legends date their OFS careers by recounting the number of downturns they have survived.”

However, the age gap today, at the field level in particular, has created an “unsustainable labor force dynamic,” he said. The 2008-2009 recession and current downturn “have forced out and turned away the bulk of the young petroleum talent from the oilfield.”

“In addition, as commission-based bonuses, which can represent up to 50-60% of total compensation for field specialists, continue to decline with activity levels and pricing, the most experienced oilfield employees have opted to delay retirement. The result is a massive age/experience disparity between retirement-ready individuals and the recurring waves of ‘green hat’ new hires.”

Labor attrition has pushed out many of the mid-career oilfield workers, who prefer career stability over their premium oilfield pay as they raise families of their own, West said.

“From our survey, a staggering 50% of laid off workers had less than five years of experience, indicative of massive turnover in young engineering talent.” Another 19% fell into the five-nine year window, while only 14% had 10-24 years of seniority. Only 3% were in the 25-39 year category.

“The age distribution was slightly top heavy, with 14% of the respondents commanding more than 40-plus years of experience per person. Several of these individuals have already come back out of retirement during the most recent 2010-2014 upcycle, since their OFS employers offered generous compensation for their specialized knowledge.”

The age gap and structural attrition caused by the downturn should hamper the industry for years to come, and the dynamics likely will not present themselves until the industry moves past the first call on incremental spreads, the Evercore analysts said

“A pure-play pressure pumper shared that at the peak it cost $10,000/employee to recruit, screen and train an employee, equating to $400,000-500,000 per spread. According to that same pressure pumper, hiring costs today have fallen by 50% as some people are still knocking on the door to find work.”

“In some cases, the larger diversifieds guarantee a minimum number of hours for some employees,” West said. “As a result, they can accept additional jobs while incurring minimal incremental labor costs and thus generating incremental gross margins in excess of 60%. Guaranteeing minimum hours will also allow these companies to attract the most qualified employees.”

Only a few of the smaller pressure pumpers guarantee hours. With gross margins at breakeven or below, West said, adding another spread without pricing is not rational from both a profit/loss and equipment life point of view. “To this end, the long-term hunt for quality labor will be more difficult.”