The massive workforce reduction that pummeled the global oilfield services (OFS) sector beginning in late 2014 has begun to reverse, particularly in North America, where activity in the onshore is quickly escalating, Rystad Energy said. 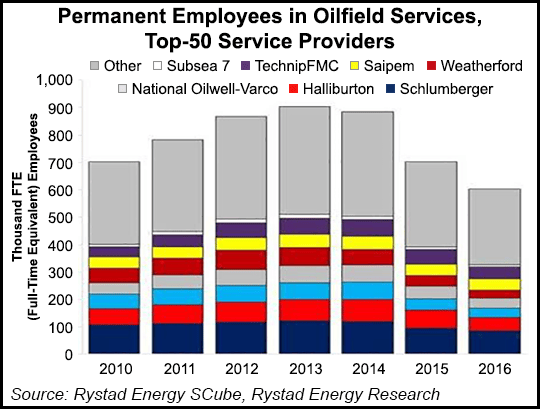 Employment in the U.S. onshore has led the way in new hires, while growth in the offshore industry should begin later this year as exploration and production (E&P) spending improves, Rystad Energy said Thursday.

“The race for the best hands and brains has started in the industry, and the companies that have laid off people in a responsible manner are likely to have a competitive edge going forward,” said Rystad’s Audun Martinsen, vice president of OFS research.

The rehiring surge follows a two-year purge that decimated the energy industry’s workforce.

North America’s unconventional operators have suffered the biggest cuts. Nabors Industries Ltd.and Helmerich & Payne (H&P), two of the largest land drillers in North America, each had cut their workforces in half, with rehiring now beginning.

The Big Four, defined as Schlumberger Ltd., Halliburton Co., Baker Hughes Inc. and Weatherford plc, were all forced to lay off between 30-40% of their employees, mostly culled from North America. Companies exposed to more of the international market cut more modestly, from 20-30%, Rystad estimated.

“Among the top 50 service companies, around 300,000 workers, or 35% of the workforce, were laid off since 2014,” said Martinsen. “However, the negative trend is about to turn, and over the last few months we have seen more job postings in North America from companies such as Weatherford, Nabors and Precision Drilling, among others.”

The offshore industry in general “has been more resilient,” but 2016 saw a lot of downsizing. Subsea operator FMC Technologies Inc., based in Houston, reduced its staff by 1,000 as it reduced costs ahead of its merger with Technip. Last October, Saipem said 800 jobs needed to be cut in Europe.

Recruitment is expected to increase once the E&P spending increases. This year, Rystad estimated that shale-focused operators would increase their spending by 30%, while offshore spending should grow from 2018 as final investment decision activity improves.

“With more projects offshore being revived in 2017, we expect the offshore layoffs to stabilize and start to increase later in 2017,” Martinsen said. “Already we see this trend in Norway, and it is only a question of time before it starts elsewhere.”

The most recent quarterly energy survey by the Federal Reserve Bank of Dallas also reported green shoots for jobs and wages in Texas, southern New Mexico and northern Louisiana, although results were mixed. Employment indexes at the end of March stood at minus 6.4 for E&P firms and 21.6 for OFS firms. The employee hours indexes showed a larger gap: minus 1.3 for E&P firms and 34.2 for services firms.