After a week of retrenchment in the U.S. natural gas patch, offset by further gains in oil-directed drilling, the combined domestic rig count rose three units to reach 503 as of Friday (Aug. 20), according to the latest figures from Baker Hughes Co. (BKR). 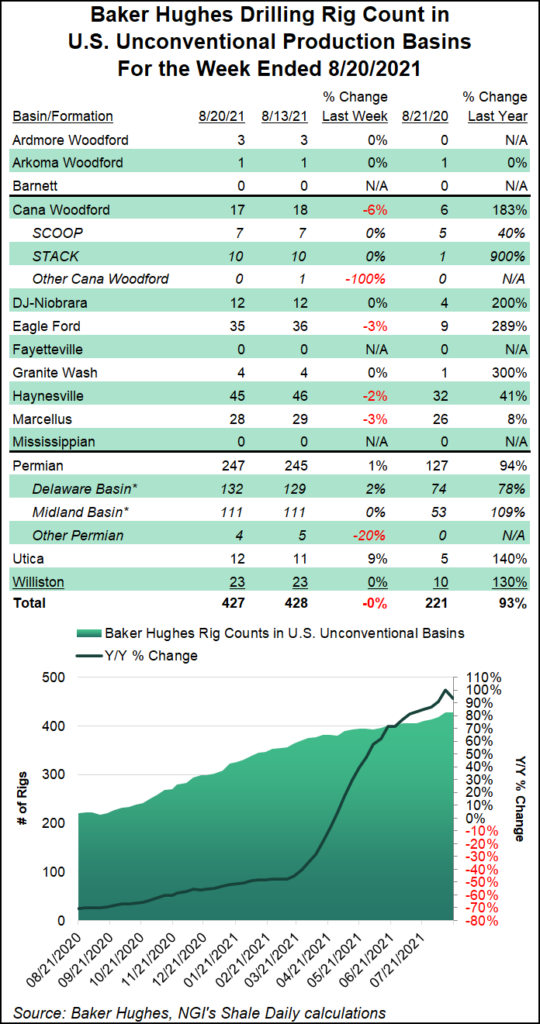 Eight oil-directed rigs were added in the United States for the period, offsetting a five-rig decline in natural gas-directed units. The 503 active rigs as of Friday compares with 254 rigs running in the year-ago period, according to the BKR figures, which are based in part on data from Enverus.

Domestic land drilling increased by one rig overall, with one additional rig each also deployed in the Gulf of Mexico and in inland waters. Three directional rigs and two vertical rigs were added overall, partially offset by a net decline of two horizontal rigs.

Canada saw its rig count slide eight units to 156 for the week, according to BKR, including declines of five oil-directed rigs and three natural gas-directed. The Canadian count still finished the period a full 100 units ahead of the 56 rigs running there at this time last year.

Broken down by play, there were no large week/week changes to speak of, with the Permian Basin posting the biggest net change by adding two rigs. The Utica Shale added one rig overall; each dropping one rig overall were the Eagle Ford, Haynesville and Marcellus shales, along with the Cana Woodford.

In the state-by-state breakdown, Louisiana picked up two rigs for the week to lead among gainers. New Mexico, North Dakota, Ohio and Utah each saw net increases of one rig. Texas and West Virginia, meanwhile, each dropped one rig from their respective totals, the BKR data show.

Lower 48 oil and natural gas production is poised to rise from August to September, the Energy Information Administration (EIA) said in its latest Drilling Productivity Report, published earlier in the week.

Overall, gas production from seven key U.S. producing regions is forecast to increase in September by 158 MMcf/d to 86,084 MMcf/d. Oil production is predicted to rise slightly overall to 8,086 b/d from 8,037 b/d.

This comes as U.S. drilling permit activity climbed sharply last month, with the Eagle Ford, Permian and the Powder River Basin leading the increase, according to a recent analysis conducted by Evercore ISI.

Based on the latest tally, E&Ps last month requested 81% more permits than in June and 12% more than in July 2020.