A de facto oil embargo placed on Venezuela by the U.S on Monday (Jan. 28) could lead to significant export revenue and production losses for state oil company Petroleos de Venezuela SA (PDVSA), according to analysts. 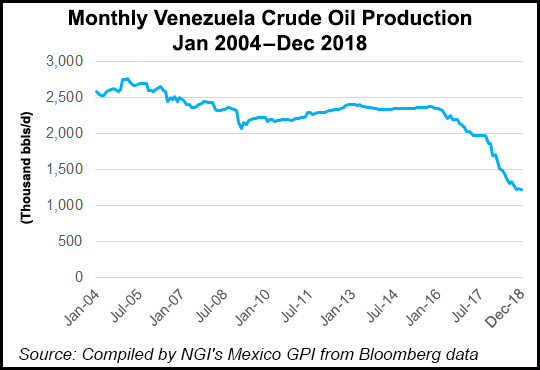 The sanctions against PDVSA prohibit the purchase of Venezuelan crude by U.S. counterparts. Venezuela had been shipping about 500,000–600,000 b/d to the U.S. The sanctions also cut off about 100,000 b/d of U.S. diluent supply into Venezuela, used for blending its extra-heavy crude oil.

“I think Venezuelan oil production will drop further as a result of the sanctions,” the Inter-American Dialogue’s Lisa Viscidi told NGI’s Mexico GPI. “They will have to sell oil at more of a discount, and there will be impact on cash flow. Venezuela will have to find new suppliers for light oil for blending. How difficult it will be to receive oil and cash from other places beyond the U.S. also remains unclear.”

The sanctions also freeze PDVSA assets worth $7 billion in the U.S. These assets are mainly related to PDVSA’s refining subsidiary, Citgo. Citgo was given an exception to continue to work in the U.S. and buy PDVSA crude until April, but funds will not be able to be directed back to Venezuela, “making it unlikely that Maduro will try to hold on to it,” according to Viscidi.

The muscular sanctions follow the Jan. 23 decision by the U.S. government to recognize National Assembly leader Juan Guaidó as the interim president of Venezuela. The U.S., along with numerous Latin American countries, claim that president Nicolás Maduro won reelection last year in a fraudulent and unconstitutional vote.

The move is intended to loosen Maduro’s grip on power in the country. The U.S. accounted for about half of all Venezuelan exports in 2018, and oil makes up a majority of Venezuela’s foreign income. Production in the country with the world’s largest proven reserves has fallen by 500,000 b/d year/year and now sits at about 1.1 million b/d.

“If Maduro can cling on to power during this time (perhaps by securing loans from China and Russia), he may be able to ride this out until oil exports can be diverted elsewhere,” said Capital Economics in a note. “But this looks a tall order. Political change is close.”

Russia and China continue to support Maduro’s claim to governance. Both countries are heavily invested in Venezuela through oil loans and joint ventures. However on Thursday Reuters reported that PetroChina Co was dropping PDVSA as partner in a planned $10 billion refinery and petrochemical project in southern China following the deterioration of PDVSA finances.

The sanctions meanwhile spark worry of further hardship in Venezuela. The International Monetary Fund (IMF) estimates that Venezuela’s GDP has fallen by 50% since 2013. Its inflation rate is the highest in the world, basic goods and medicines are scarce, and an exodus of Venezuelans are flooding across the border to Colombia daily escaping the humanitarian catastrophe.

The oil price has shown gains in January, with U.S. West Texas Intermediate (WTI) hitting a two-month high of $55.37 on Thursday. But the sanctions aren’t expected to disrupt global supply in the short term.

“The global oil market is currently well supplied with OECD crude oil stocks near the five-year average,” said IHS Market’s Jim Burkhard. “So, for now, this is not a global supply shock, although there is a sharper impact on the heavy crude oil market.”

Analysts at Raymond James warn that over the near-term “this move will almost certainly tighten the market for heavy sour grades, with USGC [U.S. Gulf Coast] refiners scrambling to source much-needed heavy oil feedstock to replace the lost Venezuela supply.”

SG Commodities Research said that “there will not be any overall shortage of supply; however, trade flows will have to change and sour vs. sweet price differentials will have to adjust accordingly, to incentivize the necessary shifts in crude movements.”

U.S. Treasury Secretary Steven Mnuchin said Monday in announcing the sanctions that some refineries had already begun to transition away from Venezuelan crude.

“These refineries impact a specific part of the country,” Mnuchin said. “We don’t expect any big impact in the short term.”