Energy stocks were rising with oil prices after countries closely aligned with the Saudi Arabian-led Organization of the Petroleum Exporting Countries (OPEC), including Russia, signaled on Saturday they would reduce their production for at least six months beginning Jan. 1. However, the U.S. response may already be underway, as rigs rise in the onshore. 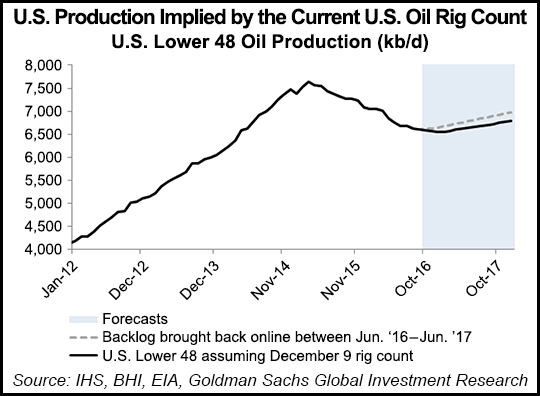 At the Nov. 30 meeting, Saudis pledged to reduce oil production by 486,000 b/d — the most substantial reduction among cartel members. Overall, OPEC pledged to cut output by 1.2 million b/d. In the first pact by the oil rivals in 15 years, non-OPEC countries agreed Saturday to trim their output by a collective 558,000 b/d for six months also starting Jan. 1, with Russia reducing output by around 300,000 b/d. The OPEC and non-OPEC plan includes countries that supply about 60% of global crude, but excluded are the United States, Canada, China and Brazil.

“I can tell you with absolute certainty that effective Jan. 1 we’re going to cut and cut substantially, to be below the level that we have committed to on Nov. 30,” Al-Falih said in Vienna. The country, he said, is ready to take production below 10 million b/d, a level it has sustained since March 2015.

“Assuming reasonable compliance levels, these cuts will be enough to push the market into deficit,” said Sanford C. Bernstein senior analyst Neil Beveridge. “This level of coordination is unprecedented.”

However, an expected rebound in U.S. unconventional output because of the agreements could bring prices back to earth to an average $55/bbl, according to Goldman Sachs. U.S. producers appear eager to increase production after adding the most oil rigs last week since July 2015, based on Baker Hughes Inc. data.

“Greater than expected compliance to the announced cuts, or Saudi’s willingness to cut production further, are two upside risks to our forecasts,” Goldman analysts said in a note Sunday. “We disagree, however, with Saturday’s comment by Saudi’s energy minister that shale would not respond in 2017.”

Based on the current oil rig count in U.S. onshore plays, shale output already is tracking to grow sequentially from the first quarter of 2017, analysts said. U.S. producers could reach an 800,000 b/d annual production growth at a price of $55/bbl for benchmark West Texas Intermediate crude, “with limited outspend of cash flow and declining leverage.”

The U.S. oil supply response, as well as a resumption in production growth by OPEC and Russia once inventories have normalized, “will further keep the market balance in 2018, even under our optimistic demand forecast, capping the medium term upside to oil prices,” Goldman analysts said.

An “ideal” price for oil is about $60/bbl, but if it were to move into the mid-$60s and beyond, U.S. shale production likely would be unleashed, said Nigerian Minister of State for Petroleum Emmanuel Kachikwu. OPEC members have felt an “urgency” to end the oil price rout, he said during an interview with Bloomberg TV.

“Once you begin to trend past mid-$60s, you’re going to have a surfeit of shale producers jump back into the market,” Kachikwu said. “Technology is improving with shale every day, and so the cost of production is continuing to drop.”

Al-Falih and Russia’s Energy Minister Alexander Novak said Saturday they had been working for nearly a year on the stabilization agreement, acknowledging they had met several times in secret. The meeting Saturday recalled the “rights of peoples and nations to permanent sovereignty over their natural wealth and resources,” said OPEC President Mohammed Bin Saleh Al-Sada, also Qatar’s minister of energy and industry.

“The meeting took into account current oil market conditions and short- to medium-term prospects and recognized the need for joint cooperation of the oil exporting countries, to achieve a lasting stability in the oil market in the interest of oil producers and consumers.”

OPEC “recognized the desire of Azerbaijan, Kingdom of Bahrain, Brunei Darussalam, Equatorial Guinea, Kazakhstan, Malaysia, Mexico, Sultanate of Oman, the Russian Federation, Republic of Sudan and Republic of South Sudan, as well as other non-OPEC producers, to achieve oil market stability in the interest of all oil producers and consumers.”

Under the agreement, the countries proposed to adjust their oil production, “voluntarily or through managed decline,” beginning Jan. 1 for six months, which could be extended another six months, “to take into account prevailing market conditions and prospects.

“What the past two months have shown is that there is a growing consensus among producers that the market recovery process has taken far too long, with severe consequences for both producer and consumer countries,” Al-Sada said. “It has had a major impact on all our countries, in terms of economic growth, heavy losses in revenue and deep social spending cuts.

“Moreover, it has also had adverse impact on consumers. We only have to look at the damaging levels of deflation” in many of the developed nations, along with record low interest rates, which is partly attributed to lower oil prices. “It is thus vital we look to return sustainable stability to the market, in order to accelerate the ongoing drawdown of the stock overhang, bring the market rebalancing forward and ensure that the necessary future oil industry investments take place, in a timely fashion,” he said.