U.S. crude oil production in the Gulf of Mexico (GOM) hit a record annual level of 1.8 million b/d in 2018, according to the Energy Information Administration (EIA), which projects that volumes will continue rising this year and next. 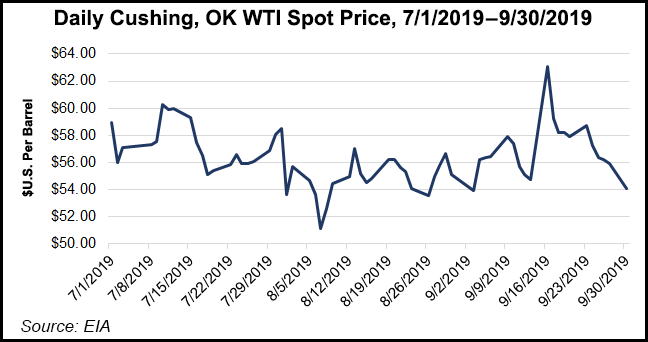 In a note on Wednesday, EIA said based on its latest Short-Term Energy Outlook (STEO), it expects annual crude production from new and existing GOM fields to average 1.9 million b/d this year and 2.0 million b/d in 2020.

Those projections account for shut-ins related to Hurricane Barry over the summer that impacted the offshore, as well as forecasted adjustments for hurricane-related shut-ins through 2020. They also come as offshore exploration spending has declined in recent years.

Despite the growth projections, EIA noted that GOM oil production will account for a smaller share of overall domestic volumes, or about 15% in 2019 and 2020, compared to 23% of total U.S. production in 2011. Onshore production growth has continued to grow and outpace the offshore.

Overall, annual U.S. crude production set a record last year at 10.96 million b/d. According to the latest STEO, U.S. volumes are expected to continue rising this year and are projected to reach an average of 12.3 million b/d, while in 2020 they’re expected to average 13.2 million b/d, thanks in large part to booming onshore production.

Low oil prices in 2015 and 2016 cut into profit margins and found GOM operators reassessing their exploration spending, EIA noted. That led to the restructuring or delay of drilling rig contracts, which pushed rig counts lower.

“Crude oil price increases in 2017 and 2018, relative to lows in 2015 and 2016, have not yet had a significant effect on operations in the GOM, but they have the potential to contribute to increasing rig counts and field discoveries in the coming years,” EIA said. “Unlike onshore operations, falling rig counts do not affect current production levels, but instead they affect the discovery of future fields and the start-up of new projects.”

The spending climate has been evident in federal leasing activity as well.

Since President Trump took office, the Interior Department has tried opening more of the offshore by pursuing a strategy of offering every available unleased area in the GOM. But the area-wide auctions, which reversed years of leasing in specific targeted regions, have to date drawn limited interest from oil and gas operators. For example, the last federal offshore auction attracted narrow bids tailored to deepwater areas of the GOM with existing infrastructure.