U.S. and global crude prices opened the New Year mired in a slump, led lower by uneven domestic demand and hints of global sluggishness amid intensifying expectations of recession. 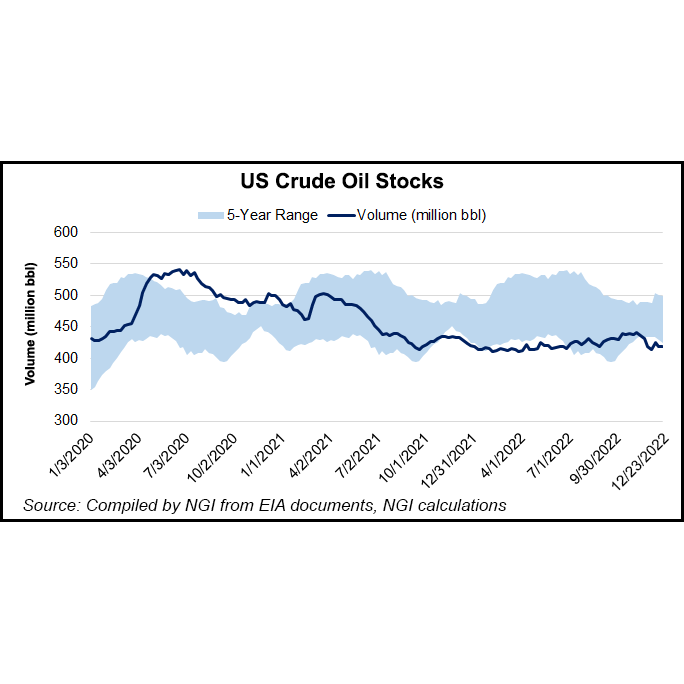 After dropping Tuesday, West Texas Intermediate (WTI) prices in the United States slid below $74/bbl in intraday trading Wednesday, down more than 4%. Brent crude, the global benchmark, dropped below $80, also down about 4%.

Both had traded well above $100 at their respective peaks in the first half of 2022.

The U.S. Energy Information Administration (EIA) said overall domestic demand for petroleum products for the period ended Dec. 23 climbed 9% week/week. The increase was driven by a jump in gasoline consumption as interstate travel heated up ahead of the Christmas holiday, according to the agency’s latest Weekly Petroleum Status Report.

However, U.S. demand proved choppy in the second half of 2022 – and relatively weak late in the year – as analysts warned that an anticipated economic slowdown in the United States and globally could drag consumption even lower.

EIA said total petroleum products supplied over the four-week period ended Dec. 23 averaged 20.8 million b/d, down 3% from the same period of 2021. Over the same span, motor gasoline demand averaged 8.7 million b/d, down 7%. EIA’s report covering the final week of December is due Thursday.

Following several central bank interest rate hikes in 2022 to fight inflation – in the United States and in other major Western economies – borrowing costs have surged and spending has begun to ease. Historically, economies tend to slow substantially or even tip into recession when these trends develop. Waning demand for travel fuels often ensues.

Globally, recently relaxed coronavirus restrictions in China could eventually bolster oil demand. But in the near term, virus cases are spiking and hampering consumption in China.

EIA analyst Jimmy Troderman said in a report Wednesday that, in the wake of rising rates, oil prices in the second half of 2022 faded.

On the final trading day of 2022, the price of Brent crude closed at about $85, or $7 higher than at the start of the year, Troderman said. The Brent price rose significantly in the first half of 2022, boosted by supply concerns in the immediate wake of Russia’s invasion of Ukraine.

However, Brent prices “generally declined in the second half of the year,” Troderman said. WTI prices followed suit, he noted, finishing the 2022 trading year at about $80, $4 higher than the start of the year. Prices for both Brent and WTI, though, were far below their early-summer highs above $120.

“From June 8 through the remainder of 2022,” crude prices gave up ground as “concerns about a possible economic recession reduced demand,” Troderman said.

However, given the Chinese government’s proven propensity to lock down major cities to stamp out even minor outbreaks of coronavirus as well as multiple pockets of geopolitical tumult, including Russia’s ongoing war in Ukraine, the outlook is riddled with doubts.

“The year 2023 is expected to remain surrounded by many uncertainties, mandating vigilance and caution,” OPEC researchers said.