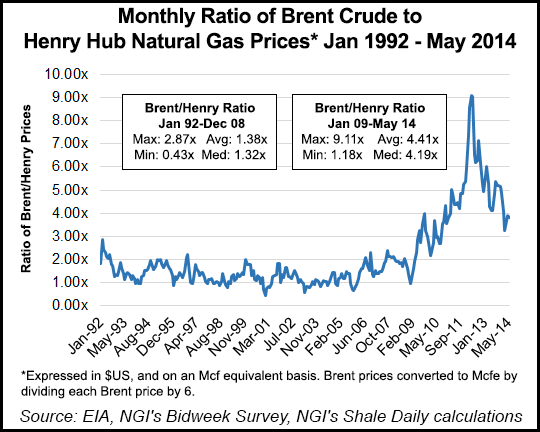 Deloitte doesn’t predict that LNG pricing tied to global crude oil will go away entirely. Instead, the report concludes that the world is in the midst of a transition to “a pricing spectrum where oil indexation is one of several pricing mechanisms used.”

Despite growing in the past 10 years to account for 10% of global gas supplies, the LNG market remains “regionally fractured due to high-cost transportation and regulatory barriers,” Deloitte said. Gas prices, as a result, remain localized. The advent of U.S. LNG exports bids to change the traditional limit for natural gas commerce worldwide.

While assessing leading global shale possibilities in the Far East, South America and Europe, the report comes down as bullish only on the U.S. shale development in the near term. Deloitte concluded that the United States is “poised to be a globalizer,” meaning it is not constrained from an export point of view by its reserves per capita or domestic demand. “It is moving toward globalization of its shale gas,” the report said.

“Although other countries, particularly Poland, China and Argentina, want to replicate [the U.S.] success, these countries still have a long road ahead before they can begin to see the gas volumes, and supporting infrastructure, needed dramatically to lower domestic gas prices and create export opportunities.”

While more diverse and competitively priced gas supplies globally may lead to trends away from oil-price indexation, it is not a slam dunk. Deloitte’s study found that the structure of long-term LNG contracts would work to increase price sensitivity to competitively priced supplies.

“Market conditions are now ripe for the next evolution in LNG pricing — indexing to gas hubs and supplementing nonprice terms,” Deloitte said.

The nonprice terms don’t necessarily favor U.S. shale gas supplies, the report noted. Differences in energy content, or heating value, are nonprice considerations. “Unconventional gas, such as shale and coal seam, are less energy dense, ”lean,’ compared to conventional, or ‘rich’ gas,” the report noted, adding that consuming nations have different expectations in this regard, with Korea and Japan liking richer gas, and China and India being willing to take leaner supplies.

The ratio between Brent and Henry prices, expressed on an Mcf equivalent basis, has come down in recent months, but still stands well above historical levels. After reaching a high of 9.11x in April 2012, the Brent/Henry price ratio was down to 3.80x in May 2014. That is still well above the respective maximum and average ratios of 2.87x and 1.38x that reigned between January 1992 and December 2008.

Ultimately, U.S. LNG exports will be a “major catalyst” for moving away from oil price indexation, Deloitte’s report concluded. From now through 2017, “the dynamics of supply competition” will drive the transition to more than just oil-indexed deals.