The current outlook for crude oil prices is much better than it was six months ago, and Federal Reserve (Fed) Chair Janet Yellen’s indication the Fed may increase interest rates soon could further boost those prices, according to Avista Utilities economist Grant Forsyth. 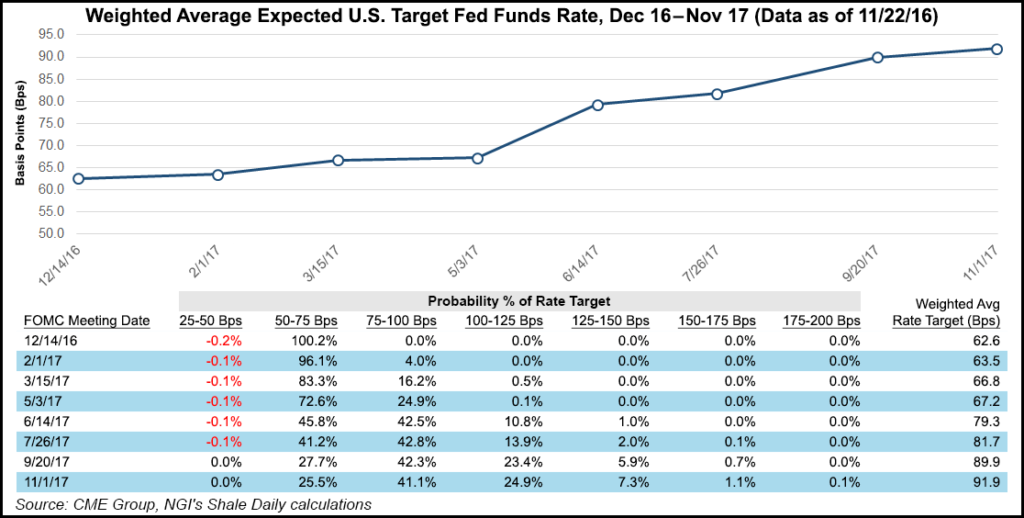 “Both the EIA [Energy Information Administration] and the future markets are very similar right now,” Forsyth said during a webinar hosted by the Northwest Gas Association (NWGA) Thursday.

“What this has done is really stabilize the exchange rate between the United States and Canada, and it has helped stabilize investment, which has been heavily reliant on the energy sector.”

“The hope is for a modest increase in energy prices so you don’t have a shock to inflation, but at the same time it is a strong enough recovery to get investment re-started in the energy business, which has become increasingly important to both the United States and Canada.”

An overlooked, but important, macro economic development in the past year has been the appreciation of the U.S. dollar to the Canadian dollar as caused by collapsing global oil prices, which bodes well for trade and energy sectors of both nations, Forsyth thinks.

“Forecasts in the EIA and future curves are higher than they were in the spring, and that is likely to help stabilize investment in the energy business,” Forsyth said.

On a regional basis, the Pacific Northwest economy is growing much faster than the nation as a whole, and the same is true for British Columbia (BC) in Canada compared to the nation as a whole. In the United States, the growth is strongest in smaller and mid-sized population centers compared to Seattle and Portland, Forsyth said. That is less true in BC, where Vancouver and Victoria are the center of all the growth.

Forsyth said he hopes the Trump administration takes a mostly hands-off approach to the Fed as recent administrations have, but he thinks it will take a very active role in encouraging new energy infrastructure projects. “That includes pipelines — gas and oil — and liquefaction facilities,” he said.