The U.S. rig count jumped 10 units higher to 543 during the week ended Friday (Oct. 15), propelled by a strong week of gains in the oil patch, according to the latest figures from Baker Hughes Co. (BKR). 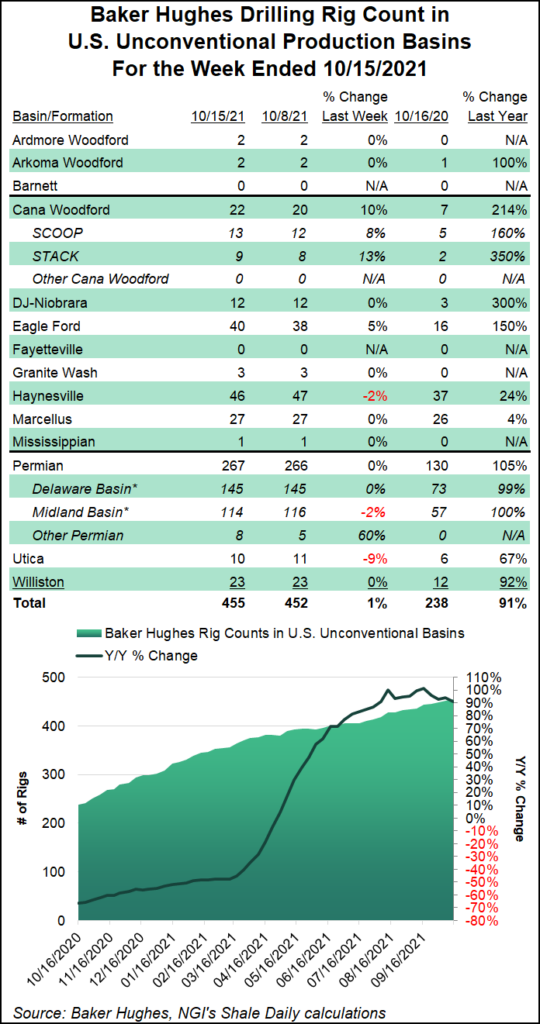 A 12-rig increase in oil-directed drilling in the United States offset net declines of one natural gas-directed and one miscellaneous unit. The combined 543 active U.S. rigs as of Friday compares with 282 rigs running in the year-earlier period, according to the BKR numbers, which are partly based on data from Enverus.

Land drilling increased by nine rigs domestically, while the Gulf of Mexico added two rigs to raise its total to 12, versus 14 a year ago. Ten directional rigs were added, along with two vertical rigs. Partially offsetting was the departure of two horizontal rigs for the week.

The Canadian rig count climbed one unit to 168 for the period, a result of three additional oil-directed rigs offsetting a decline of two natural gas-directed units. Canada’s 168 active rigs as of Friday represents an 88-rig increase over the 80 units running at this time a year ago.

Among major basins, BKR recorded increases of two rigs each in the Cana Woodford and Eagle Ford Shale, while one rig was added in the Permian Basin. The Haynesville and Utica shales each posted net declines of one rig for the week.

Broken down by state, Texas led with a net increase of three rigs overall, while California, Louisiana and Oklahoma each added two rigs for the period. Alaska and West Virginia added one rig each. New Mexico and Ohio each saw one rig exit for the period, according to BKR.

Oil inventories for the week ended Oct. 8, excluding those in the Strategic Petroleum Reserve, increased by 6.1 million bbl from the previous week.

At 427.0 million bbl, inventories are still 6% below the five-year average, EIA said. This resulted from the combination of mounting demand and modest production over the summer months. However, the deficit has begun to narrow this fall. U.S. oil stocks climbed nearly 13 million bbl over the past three weeks.