A modest uptick in the oil patch, and in the Permian Basin in particular, drove a three-rig increase in the U.S. rig count for the week ended Friday (March 6), according to the latest data from Baker Hughes Co. (BKR). 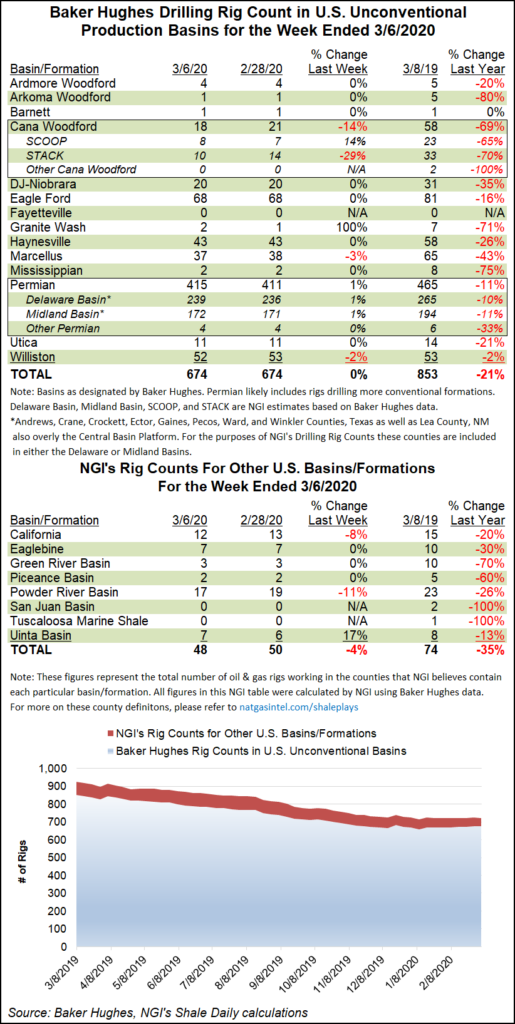 The combined U.S. total finished the week at 793, including a four-rig increase in oil-directed drilling that was partially offset by the loss of one natural gas-directed rig. The U.S. count lags its year-ago total by 234 rigs.

Activity increased by one rig each across the land, inland waters and Gulf of Mexico categories. The addition of five directional rigs in the United States for the week was partially offset by the loss of two vertical units.

In Canada, 37 rigs departed week/week, including 29 oil-directed and eight gas-directed. The Canadian rig count ended at 203, up from 189 a year ago.

The combined North American rig count finished the week at 996, versus 1,216 at this time last year.

Among the major plays, the Permian added four rigs for the week, upping its count to 415. That’s down from 465 at this time last year. Meanwhile, the Cana Woodford saw three rigs depart overall during the week, dropping it to 18 rigs, down sharply from 58 in the year-ago period.

Also among plays, the Granite Wash and Haynesville Shale each added a rig, while the Marcellus Shale and Williston Basin each dropped one.

Among states, Louisiana and Texas each added three rigs week/week, while Wyoming and Oklahoma each dropped two rigs during the period. New Mexico and Utah added one rig a piece, while California, North Dakota and West Virginia each dropped one rig.

BKR also published its February 2020 international rig count Friday, which increased by seven month/month to 1,085, up from 1,027 a year ago. The international count includes Latin America, Europe, Africa, the Middle East and Asia Pacific.

While oil activity picked up domestically during the week, the outlook for U.S. producers remains clouded by the potential demand impacts of the coronavirus and uncertainty over whether the Organization of Petroleum Exporting Countries (OPEC) and its allies will institute additional supply cuts.

Reports that an OPEC meeting Friday ended without a deal to curtail production helped send oil prices tumbling. West Texas Intermediate futures on the New York Mercantile Exchange were trading nearly $4 lower day/day at around $42/bbl as of Friday afternoon on the East Coast.