Amid a ramp-up in both oil- and natural gas-directed drilling, the United States added five rigs to raise its tally to 484 during the week ended Friday (July 16), according to the latest count from Baker Hughes Co. (BKR). 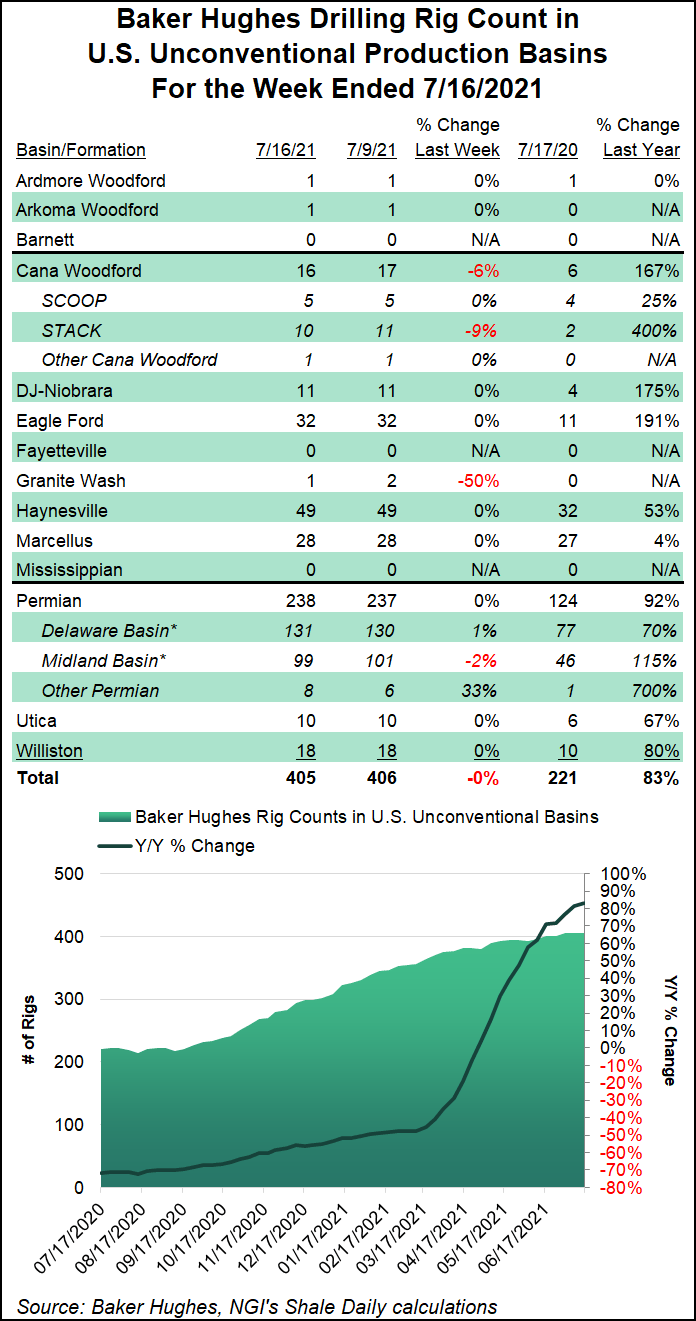 Three natural gas-directed rigs and two oil-directed rigs were added domestically during the week. The U.S. rig count as of Friday was 231 rigs ahead of the 253 active units in the year-ago period, the BKR numbers, based in part on data from Enverus, show.

Three vertical units, one directional unit and one horizontal unit were added in the United States for the period. Land drilling increased by five units overall, while the Gulf of Mexico count held at 17, up from 12 a year ago.

In Canada, six oil-directed rigs and seven gas-directed rigs were added during the week, lifting the overall count there 13 units to 150. That’s up sharply from 32 active Canadian rigs at this time last year.

Broken down by major play, the Permian Basin saw a net increase of one rig for the period, raising its total to 238, versus 124 in the year-ago period. The Cana Woodford and Granite Wash each posted net declines of one rig week/week.

Broken down by state, Wyoming led with an increase of three rigs, bringing its tally to 13, compared to just one active rig in the year-ago period. Elsewhere among states, Oklahoma added two rigs, while Alaska and Louisiana each added one. Texas posted a net decline of two rigs for the period, according to the BKR data.

Monthly employment in the oilfield services sector surpassed 2020 levels for the first time in June, but remained well below pre-coronavirus figures logged in 2019, according to the preliminary figures released recently by the Energy Workforce & Technology Council.

Overall, the Houston-based organization said 8,002 jobs were added in June, marking a 1.3% increase over May and a fourth consecutive month of growth. The estimates are based on monthly and quarterly employment data from the U.S. Bureau of Labor Statistics.

That comes as the Organization of the Petroleum Exporting Countries (OPEC) in its first detailed estimates for 2022 said projected global crude demand would increase through next year as coronavirus vaccination efforts expand and consumption of travel fuel mounts.