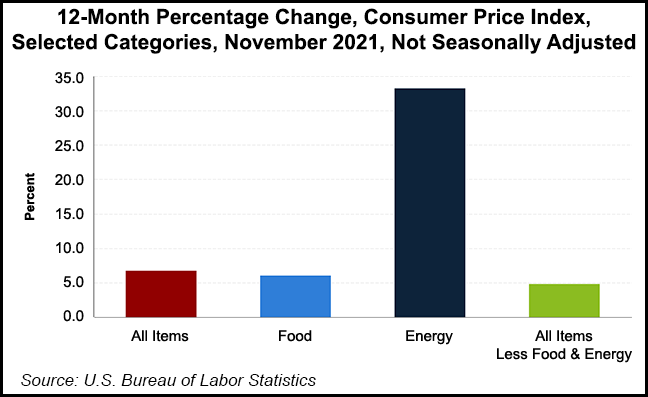 The U.S. Bureau of Labor Statistics (BLS) said Friday the consumer price index surged 6.8% in November from the same month a year earlier, marking the fastest rate since 1982 and the sixth consecutive month of inflation above 5%.

November energy prices soared 33% from a year earlier — far more than any other category tracked by the BLS — and jumped 3.5% from October. The cost of gasoline at the pump was up more than 58% over the past 12 months, according to the federal report.

The core price index, which excludes energy and food because of elevated volatility inherent in both categories, rose 4.9% in November from a year earlier. That marked an increase from October’s 4.6% jump and the fastest pace since 1991.

In a separate report earlier this month, the BLS said Americans’ pay had increased 4.8% over the past year, but after accounting for inflation, average hourly earnings were down 0.4% for November and down 1.9% over the past 12 months.

The November data, however, did not account for the emergence of the Omicron variant of the coronavirus – a development that analysts say could at least temporarily curb energy price inflation.

The new strain raised fresh worries about winter virus outbreaks and correlated economic and travel restrictions to slow its spread. Those concerns did at least put near-term downward pressure on oil prices early in December.

After topping $84/bbl in late October, West Texas Intermediate crude futures dropped below $70 level early this month and hovered just above that level on Friday.

But recent public health data from South Africa – where Omicron first spread widely before arriving in the United State in late November – indicated that existing vaccines could prove effective against the new variant. This could ward off lasting restrictions and reopen the demand gates that have driven up oil prices this year.

“It is still too early to know for sure how serious the virus will be or how long it will transpire, but the early reads have overall been better than feared in that…current vaccines are likely to provide some protection from severe illness, and cases so far have been mild,” said Raymond James Inc.’s Mike Gibbs, managing director.

Natural gas futures, too, have come off multi-year highs reached in October – largely because of a mild start to the heating season amid benign weather early this month.

But snow and freezing temperatures blew into the Midwest Friday, with weather systems expected to push East over the weekend. Henry Hub futures gained ground Friday, and if winter conditions settle in across the nation’s midsection and the Northeast, strong heating demand could propel prices in coming weeks.

She noted that pipeline supplies from the Russian to Europe, expected to ramp up to meet demand, have yet to do so. “After some days of calm, market sentiment is again skewed to the upside as new supply concerns in Europe have emerged,” Xiong said.