For major oil and gas companies that are increasingly touting their commitments to clean energy, hydrogen holds special appeal. 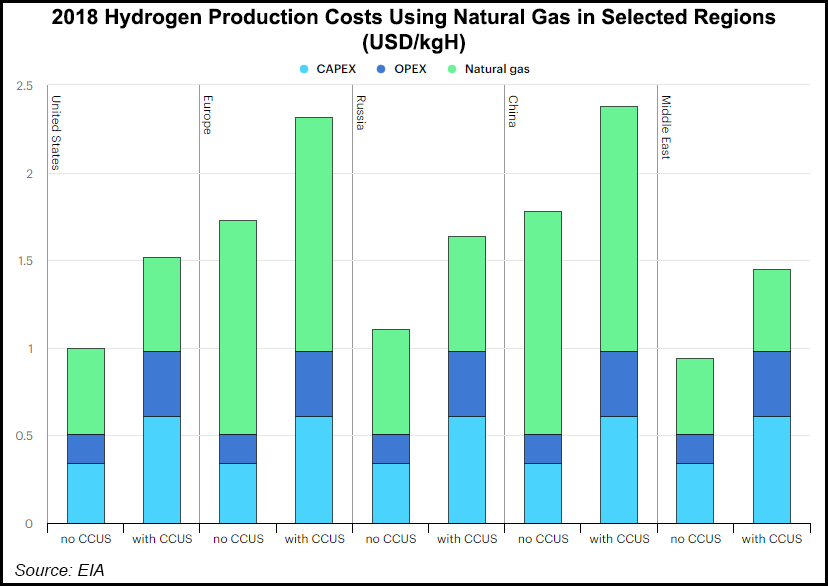 When burned, hydrogen does not emanate the greenhouse gases (GHG) scientists say damage the environment and fuel global warming. It can be delivered by pipeline or shipped and, notably, it is relatively easy to store when compared with other renewable sources of electricity such as solar and wind.

So-called green hydrogen, still in its infancy, is the key for energy companies navigating what many in the industry believe is an inevitable transition from fossil fuels to renewables over the next three decades. Made using water – not hydrocarbons – green hydrogen holds promise as a genuinely clean source of fuel to power everything from factories to homes to cars. Other forms of hydrogen are not carbon free, but they are widely viewed as cleaner than fossil fuels.

“While it’s very early days for many production pathways to hydrogen, especially green hydrogen, time will tell if the costs to produce it follow a downward trend similar to those for producing hydrocarbons from shale or remain at levels so high the current hydrogen bubble bursts like others before it,” Ferguson said.

Indeed, the potential for hydrogen has loomed for decades, but it has yet to be realized in large measure because of the relatively high costs. As such, necessary infrastructure is not currently in place to either produce or consume hydrogen at a scale needed to make an impact, said NGI’s Patrick Rau, director of strategy and research.

For example, many existing turbines can only burn a relatively small amount of hydrogen. Pipelines, meanwhile, are likely to be the most economical way to transport the fuel, but hydrogen tends to be highly corrosive on steel, Rau said.

“So shipping it in existing infrastructure is a problem that must be worked out,” he said. “Midstream companies are in the early stages of addressing that, but there is much to overcome.”

Houston-based Kinder Morgan Inc., for example, said it has the technology in place to blend hydrogen with natural gas and move it via its pipelines, and the company views hydrogen production as a plausible future possibility. However, CEO Steve Kean said during the fourth quarter earnings call that it would take a combination of government support and major investments by energy giants to create the scale necessary to make hydrogen profitable.

“Hydrogen is promising,” Kean said. “It’s been the fuel of tomorrow for decades…It takes, I think, some subsidies to get it to a point where it’s really actionable. It’s $19/MMBtu today. Will it ultimately serve a compelling fraction of the energy needs? Yeah…but there’s a lot to be done there to make that a sensible thing to do” financially.

Government policies in Europe and now the United States, among other corners of the world, could boost tax incentives and galvanize investments in infrastructure needed to steadily, over the course the next decade, lead to large-scale projects. In turn, this could pave the path for the mass production and distribution needed to make hydrogen economical, analysts and increasingly more energy executives say.

This was recently amplified with the election of President Biden, who took office in January following a campaign premised in large part on a $2 trillion infrastructure and clean energy plan to address climate change. Biden vowed to get the United States on a path to a carbon-neutral economy by 2050, and to that end, he ordered the country back into the United Nations climate accord, aka the Paris Agreement.

While hydrogen currently accounts for almost nothing today, McKinsey & Co. estimated it could drive 14% of U.S. power by 2050 – also the carbon-neutral target year set by the Paris Agreement.

“While still in its early stages,” BTU Analytics’ Matthew Hoza, manager of energy analysis, said he is tracking 11 power plants in the U.S. alone that have announced plans to use a blend of hydrogen and natural gas or pure hydrogen this decade.

“We are likely to see more,” Hoza said. “This creates opportunities for pipelines to help transport a carbon-free fuel and help off-takers meet climate and emissions goals. There are certainly obstacles,” but “power plants and industrial users will increasingly look for ways to reduce emissions to meet state, local, or self-imposed mandates.”

Resistant until recent years, energy companies braced for change are beginning to promise major shifts to renewables and, increasingly, they are citing hydrogen as a key piece of the pie.

In fact, during the current earnings season, hydrogen has emerged as a prominent element within companies’ broader clean energy plans.

Major oil and gas companies are promising to lead the charge, first by developing blue hydrogen – created as a byproduct of natural gas through captured carbon – because it is less expensive than its green sibling. Green hydrogen is expected to follow.

“Through 2025, we expect to invest more than $3 billion in lower emissions initiatives, which include energy efficient process technology, advanced biofuels, hydrogen and carbon capture and storage, which is a crucial technology for achieving the goals outlined in the Paris Agreement,” ExxonMobil CEO Darren Woods said during the Texas-based recent earnings call.

He and other CEOs of U.S.-based companies have said they hear investors’ mounting demands but also see as probable more support from governments domestically and abroad.

France’s Total SE, for one, views hydrogen as increasingly critical. “We need support from governments in order to move forward, but there is a lot of enthusiasm in Europe from European governments to develop this hydrogen economy,” said CEO Patrick Pouyanné during the quarterly earnings call.

“The writing is on the wall,” Pouyanné added. “Clean, low-carbon energy is the future.”

Hydrogen “is definitely a gas fuel of the future,” BP plc CEO Bernard Looney said. “There’s no question about that.”

The UK major is working on a long-term project that Looney said would be “one of the world’s first net-zero industrial sites.” Hydrogen will play a vital role.

“We believe in hydrogen,” Looney added. “But it’s not something that’s going to happen overnight in terms of being a material part of BP’s portfolio.” He said that is more likely by the next decade.

NGI’s Rau characterized that timeline as plausible for a major such as BP that has both vast resources and a head start relative to smaller companies. “It will likely be even longer until it is material for the industry as a whole,” he said. “But hydrogen will certainly be a major part of the global energy mix, particularly as we get closer and closer to 2050.”

In the meantime, energy executives said natural gas has a long runway before it — several decades, by many accounts.

“My sense is that the fear about the future of natural gas is a bit overblown, maybe way overblown,” Milwaukee-based WEC Energy Group Inc. Executive Chairman Gale Klappa said on the recent earnings call. “Natural gas is going to be an important product, I believe, for many years to come.”