The White House on Tuesday restored three core elements of the National Environmental Policy Act (NEPA) that had been rolled back under the Trump administration, heralding tighter environmental scrutiny for energy projects during the federal review process. 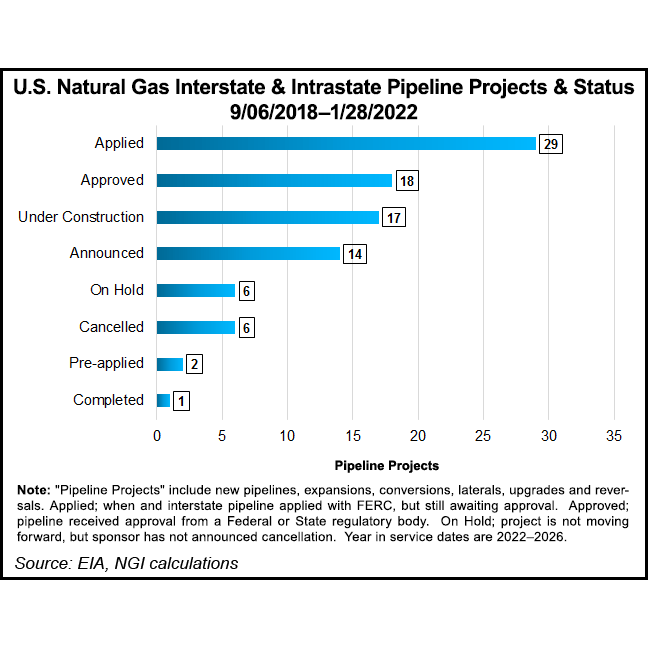 “The specific changes made by today’s ‘Phase 1’ rule restore longstanding provisions that were modified for the first time in 2020; these 2020 changes caused implementation challenges for agencies and sowed confusion among the general public,” officials said.

Enacted in 1969, NEPA is a cornerstone of the federal permitting process for a wide range of activities. It applies to upstream oil and gas development, as well as the construction of fossil and renewable energy infrastructure, roads, bridges and transit systems.

The Trump Administration’s overhaul of NEPA was designed to streamline the approval process for major infrastructure projects, including oil and gas pipelines, and was hailed by industry advocates.

The regulation finalized on Tuesday by the White House Council on Environmental Quality (CEQ) requires federal agencies to evaluate “all relevant environmental impacts — including those associated with climate change – during environmental reviews,” officials said. It requires agencies to “consider the ‘direct,’ ‘indirect,’ and ‘cumulative’ impacts of a proposed action, including by fully evaluating climate change impacts and assessing the consequences of releasing additional pollution in communities that are already overburdened by polluted air or dirty water.

“This has been the practice for decades and it ensures that decisions are not held up in court because of a failure to consider these impacts.”

“Restoring these basic community safeguards will provide regulatory certainty, reduce conflict, and help ensure that projects get built right the first time,” Mallory said. “Patching these holes in the environmental review process will help projects get built faster, be more resilient, and provide greater benefits – to people who live nearby.”

“With energy costs high for American consumers and European allies looking to the U.S. for access to an affordable and stable energy supply, we need policies in place that provide certainty and ensure American producers can meet rising demand at home and abroad,” Macchiarola said. He urged the administration “to change course and establish a timely and efficient permitting process that supports the energy security needs of the U.S. and our allies overseas.”

Macchiarola also cited the recently announced task force between the United States and European Union to shore up supply of liquefied natural gas (LNG) to Europe in order to lessen its dependence on Russian natural gas.

“An effective and efficient NEPA process is critical to expanding LNG export projects, which will likely require additional interstate pipeline capacity,” he said. “Without a timely and efficient permitting system, infrastructure projects that are critical to U.S. energy security cannot be constructed under a timeframe that reflects the urgency for which they are needed.”

The U.S. Chamber of Commerce’s Marty Durbin, senior vice president of policy, spoke out against the rulemaking as well. “It should never take longer to get federal approval for an infrastructure project than it takes to build the project, but that very well may be the result of the administration’s changes that revert back to the broken 1978 NEPA review process,” Durbin said.

He added, “The Infrastructure Investment and Jobs Act, building on the NEPA updates implemented in 2020, established bipartisan support for badly needed permitting improvements.

Durbin warned that, “Layering on more requirements in the Phase 1 rule announced today compounded by another…set of Phase 2 requirements expected later this year will serve only to smother recent progress.

What Else Does the NEPA Rule Include?

The final rule also restores the full authority of agencies to work with communities on alternative approaches to minimize environmental and public health costs. “The 2020 NEPA rule limited federal agencies’ ability to develop and consider alternative designs or approaches that do not fully align with the stated goals of the project’s sponsor, often a private company,” the White House said.

Finally, the new rulemaking establishes CEQ’s NEPA regulations “as a floor, rather than a ceiling, for the environmental review standards that federal agencies should be meeting,” CEQ said.

The White House added that, “Over the coming months, CEQ will be proposing a Phase 2 NEPA rulemaking that will provide further improvements to the efficiency and effectiveness of environmental review processes and reflect the administration’s commitment to achieving environmental justice and confronting climate change.”