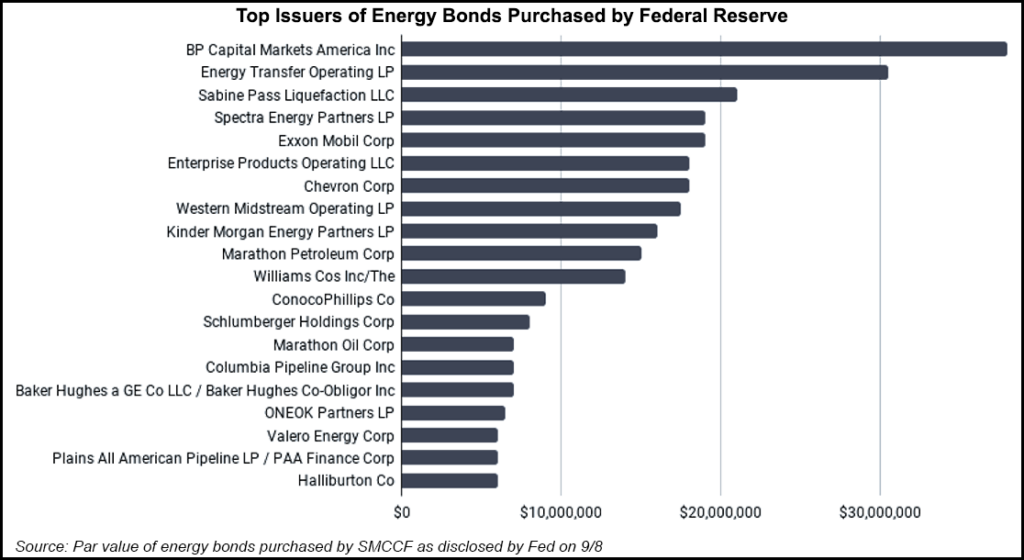 The oil and natural gas industry has embarked on a lavish borrowing spree this year, underpinned by a federal bailout of corporate debt markets in response to Covid-19, a new analysis has found.

Oil and gas companies, already in dire financial straits before the pandemic, have issued $99.3 billion in debt in U.S. markets since March 23, said the report authored by nonprofit organizations Friends of the Earth, Public Citizen and BailoutWatch.

On that date, the Federal Reserve Bank, aka the Fed, announced it would purchase corporate bonds for the first time ever through a program called the Secondary Market Corporate Credit Facility (SMCCF) as an emergency measure to keep financial markets afloat amid the pandemic-driven economic downturn.

The oil and gas industry, “heavily indebted and struggling long before the coronavirus, is now benefitting substantially from the central bank’s bailout of the corporate debt markets,” researchers said.

An analysis of Securities and Exchange Commission filings and market data “reveals troubled companies, some on the brink of insolvency, exploiting the federal response to Covid-19 to secure a lifeline…The borrowing includes a wave of refinancing often resulting in later payment deadlines, substantially lower borrowing costs, or both.

“In effect, the Fed is forestalling the demise of an industry that has always relied on government largesse.”

The Fed had purchased debt from 19 operators since the March announcement, researchers said. Those companies have since sold more than $60 billion in new bonds to investors, or about 60% of the debt issued during the period.

“When consumers take on too much credit card debt, they can be forced into bankruptcy and face financial ruin,” said co-author Public Citizen’s Alan Zibel, research director for the think tank’s Corporate Presidency Project. “This bailout is an unprecedented rescue of a dying industry. Instead of bailing out climate-destroying fossil fuel companies we must assist small businesses, local governments and individuals facing dire financial straits.”

The report’s authors cited a recent forecast from Rystad Energy that up to 190 oil-related bankruptcies could occur by the end of 2022 if oil prices remain low.

Year-to-date, oil and gas companies incorporated in the United States have issued $129 billion in new bonds, researchers said, citing Bloomberg data. That is a record for the period going back at least a decade.

“The first three quarters of 2020 represent the highest level of debt issuance for that period since at least 2010,” researchers said. “This surge in borrowing was made possible by the Fed’s promise to purchase large quantities of corporate debt.”

At the end of August, the Fed held an estimated $355.5 million in fossil fuel bonds, researchers said, up $40 million from July.

The bonds were issued by companies ranging from integrated majors such as ExxonMobil and BP plc, independents including Apache Corp. and Continental, and midstream operators like Enterprise Products Partners LP and Williams, the authors said.