A $369 billion climate and energy spending package unveiled by Senate Democrats last week could impact the oil and gas industry on multiple fronts, namely with regard to leasing, royalty rates and methane emissions. 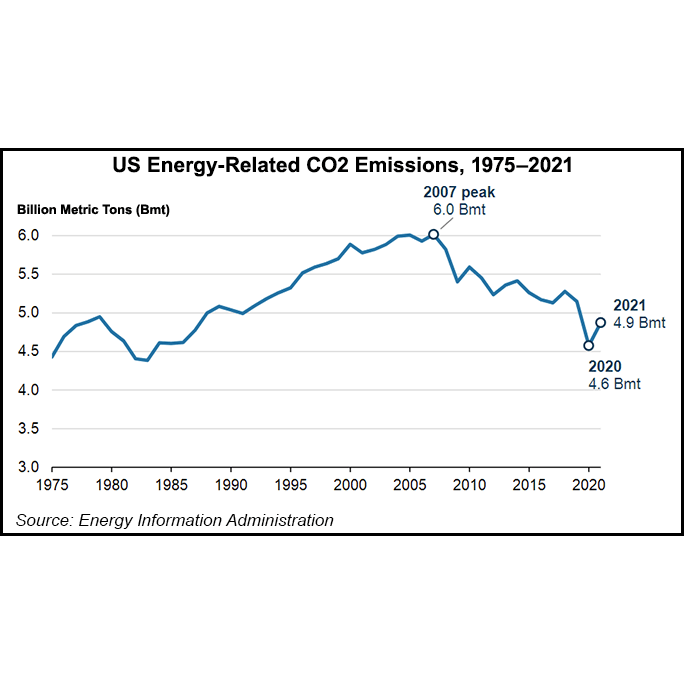 Senate Majority Leader Chuck Schumer and fellow Democratic Sen. Joe Manchin announced an agreement late Wednesday to add the energy and climate provisions to a budget reconciliation bill that could be voted on as soon as this week.

The proposed legislation, dubbed the Inflation Reduction Act of 2022, targets a roughly 40% reduction in greenhouse gas emissions by 2030, “and would represent the single biggest climate investment in U.S. history, by far,” according to a fact sheet. It also mandates a 15% corporate minimum tax rate for the roughly 200 largest corporations currently paying a lower rate.

“By a wide margin, this legislation will be the greatest pro-climate legislation that has ever been passed by Congress,” said the New York lawmaker. “This legislation fights the climate crisis with the urgency the situation demands and puts the U.S. on a path to roughly 40% emissions reductions by 2030, all while creating new good-paying jobs in the near and long-term.”

The legislation would raise the minimum royalty rates for oil and gas production from federal leases, including both offshore and onshore, by four percentage points, from 12.5% to 16.66%. It would also raise the rates for all production, including vented and flared natural gas.

In a positive development for the industry, the Department of the Interior would not be allowed to issue a lease for offshore wind development without first conducting at least a 60-million acre offshore oil and gas lease sale.

The bill could also reinstate leases awarded via offshore Lease Sale 257 in November 2021. A federal judge nullified the results in January 2022, citing flawed analysis of climate change impacts when the lease was drawn up under the Trump administration.

The American Petroleum Institute (API) has yet to issue an official verdict on its view of the legislation. A spokesperson told NGI’s Shale Daily that the lobbying group was still evaluating the text of the bill.

API’s Amanda Eversole, chief advocacy officer, did say, however, that, “While there are some improved provisions in the spending package released last night, we oppose policies that increase taxes and discourage investment in America’s oil and natural gas…”

Manchin’s endorsement of the climate outlays and corporate tax hikes is a major reversal for the centrist West Virginia senator. He had previously rejected the inclusion of either in a reconciliation bill, according to multiple reports, seemingly dooming President Biden’s ambitious climate agenda.

The latest proposal, however, does not exclude fossil fuels from the climate fight, Manchin said.

The bill “invests in the technologies needed for all fuel types – from hydrogen, nuclear, renewables, fossil fuels and energy storage – to be produced and used in the cleanest way possible,” said Manchin, who chairs the Senate Committee on Energy and Natural Resources. “It is truly all of the above, which means this bill does not arbitrarily shut off our abundant fossil fuels. It invests heavily in technologies to help us reduce our domestic methane and carbon emissions and also helps decarbonize around the world as we displace dirtier products.”

He added, “​​Most importantly, I am heartened by the bipartisan recognition that for America to achieve our energy and climate goals, it is critical we reform the broken permitting process.

“President Biden, Leader Schumer and Speaker Pelosi have committed to advancing a suite of commonsense permitting reforms this fall that will ensure all energy infrastructure, from transmission to pipelines and export facilities, can be efficiently and responsibly built to deliver energy safely around the country and to our allies.”

The legislation aims to decarbonize every segment of the economy, “substantially reducing emissions from electricity production, transportation, industrial manufacturing, buildings, and agriculture.”

Measures include a fee on methane emissions from all segments of the oil and gas industry, a provision that the industry has lobbied against. The fee would start at $900/ton starting in 2024, rising incrementally to $1,500/ton for 2026 and beyond.

The proposed methane fee “represents considerable improvements over the House of Representatives approved Build Back Better legislation, and we were pleased to see that industry’s concerns with those provisions were taken into consideration in this proposal,” said the Interstate Natural Gas Association of America’s (INGAA) Amy Andryszak, president. “It will be important to consider this provision in the context of proposed regulations that the Environmental Protection Agency (EPA) has yet to finalize.”

She added, “Most importantly, INGAA applauds the agreement between President Biden, Sen. Manchin and the leadership of the House of Representatives and Senate that will require a permitting reform bill be part of these negotiations.

The “largest and most impactful chunk” of the proposal relates to clean energy tax credits, including a clean hydrogen tax credit, as well as support for nuclear energy and carbon, capture and storage (CCS), according to an analysis by Jefferies Group LLC.

The Senate Parliamentarian still must approve the 725-page bill’s text in order for a vote to occur via budget reconciliation, a Senate procedure through which bills can be approved by a simple majority.

President Biden endorsed the bill, noting it is far from a done deal, despite Manchin’s support.

“If enacted, this legislation will be historic, and I urge the Senate to move on this bill as soon as possible, and for the House to follow as well,” Biden said. The bill, he said, would improve energy security and help tackle the climate crisis “by providing tax credits and investments for energy projects.”

The president added, “This bill will reduce the deficit beyond the record setting $1.7 trillion in deficit reduction we have already achieved this year, which will help fight inflation as well.

“And we will pay for all of this by requiring big corporations to pay their fair share of taxes, with no tax increases at all for families making under $400,000 a year.”

Schumer said, “I expect that the remaining work with the parliamentarian will be completed in the coming days and the Senate will vote on this transformative legislation next week.”

Various other rebates and tax credits would incentivize the decarbonization and electrification of homes and buildings, as well as the purchase of electric vehicles.