Oil and natural gas exploration will play an essential role in meeting global energy demand through at least 2040, even if human-induced global warming is kept under 2 C, according to a new analysis by Wood Mackenzie. 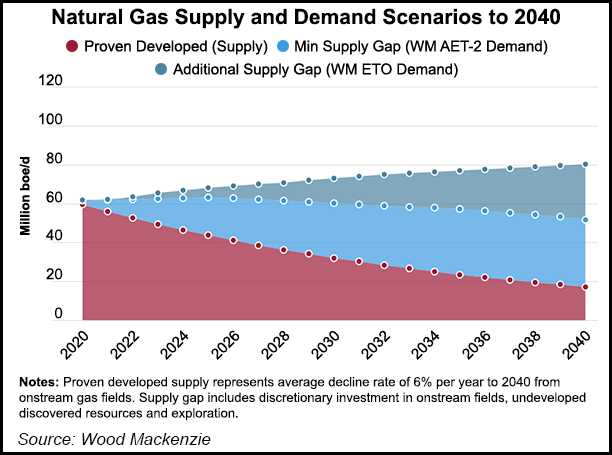 According to Wood Mackenzie, oil and gas demand over the next two decades will be at least 1,100 billion boe under a 2 C scenario, and could reach up to 1,400 billion boe in a base case scenario of a 3 C increase.

About 640 billion boe of the total could be met by proven, developed supply from onstream fields, they said, leaving a supply gap of 460-760 billion boe.

Although the entire supply gap and more could be met from the incremental development of existing discoveries, “Only resources with the lowest cost and best economics are advantaged and should attract capital. Much of the known resource…does not fit the bill.”

As a result, Wood Mackenzie expects more than 100 billion boe of the supply gap, split about evenly between oil and gas, to come from exploration, meaning the industry will need to maintain its exploration success rate of the past five years through at least 2030.

Perhaps counter-intuitively, exploration in many cases holds its own in terms of full-cycle costs against the development of existing discoveries, the analysts said.

“Whatever gains the incremental volumes enjoy from existing infrastructure are offset by the law of diminishing returns,” they explained, noting that the easy barrels in most cases have already been developed, and the remaining resources are harder to recover.

In other words, exploration and production (E&P) operators “on average, find better resources than the legacy assets that still await development.”

What’s more, reporting by companies on environmental, social and governance (ESG) metrics “will become obligatory and universal,” which could favor exploration, as operators “struggling to decarbonize disadvantaged older assets might even find it cheaper to start afresh with new discoveries.”

The analysts said proven developed supply, i.e. barrels from onstream fields that don’t require further capital investment, have the lowest point-forward costs, but will only supply 44-57% of oil and 48-58% of gas demand through 2040.

“The other half of supply requires investment,” they said, highlighting that while exploration implies longer cycle times than brownfield projects, production from discoveries completed between 2010 and 2019 will peak 10 years quicker than from the previous decade’s exploration because of an increased focus on developing projects with a clear path to commercialization.

The report follows recent pledges by European majors such as Royal Dutch Shell plc, BP plc and Equinor ASA to achieve either net zero or drastically carbon emissions by 2050.

These companies “are allocating more capital toward new energy which might directly reduce exploration spending” in the future, Latham and Wilson said. “At the same time, most majors, leading E&Ps and many [national oil companies] are continuing with high-impact wildcatting” and new exploration ventures.