A slowdown in both oil- and natural gas-directed drilling activity in the United States saw the domestic rig count drop four units to 780 for the week ended Friday (Dec. 9), according to the latest data from oilfield services provider Baker Hughes Co. (BKR). 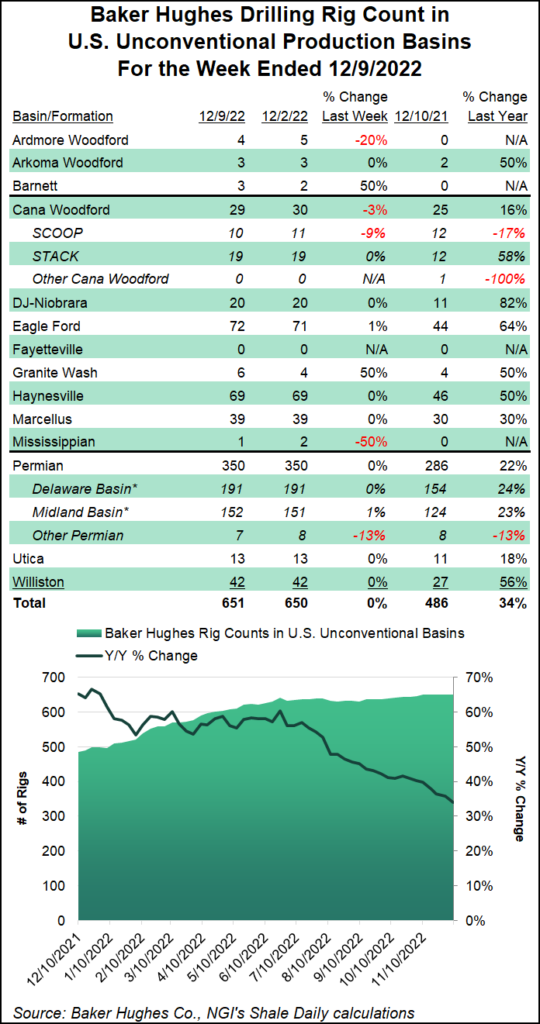 Total oil-directed rigs were down two domestically week/week, with natural gas-directed rigs also down two. Land drilling declined by three rigs, with one rig exiting from inland waters. Horizontal rigs in the United States were off three for the period, with directional rigs down two. Partially offsetting was the addition of one vertical rig, the BKR data show.

The combined 780 active U.S. rigs as of Friday compares with 576 rigs running in the year-earlier period, according to the BKR numbers, which are partly based on data from Enverus.

In terms of changes by major drilling region, the Granite Wash added two rigs to raise its total to six, versus four a year ago. The Barnett and Eagle Ford shales each added one rig, while the Ardmore Woodford, Cana Woodford and Mississippian Lime each dropped a rig from their respective totals.

Counting by state, New Mexico picked up two rigs week/week to end with 106, up from 90 at this time last year. Alaska and Oklahoma dropped two rigs a piece, while Texas and Wyoming each dropped one rig, according to the BKR data.

Domestic oil production recently jumped back to 2022 peak levels, according to the Energy Information Administration (EIA).

Domestic production, while still well below the 13.1 million b/d record level reached in early 2020 prior to widespread coronavirus outbreaks, has consistently held above 12.0 million b/d through the fall and above year-earlier levels.