The new year could see the global oil market swing from its current state of oversupply to some of the highest monthly supply deficits in years as the rollout of Covid-19 vaccines propels a recovery in demand, according to experts. 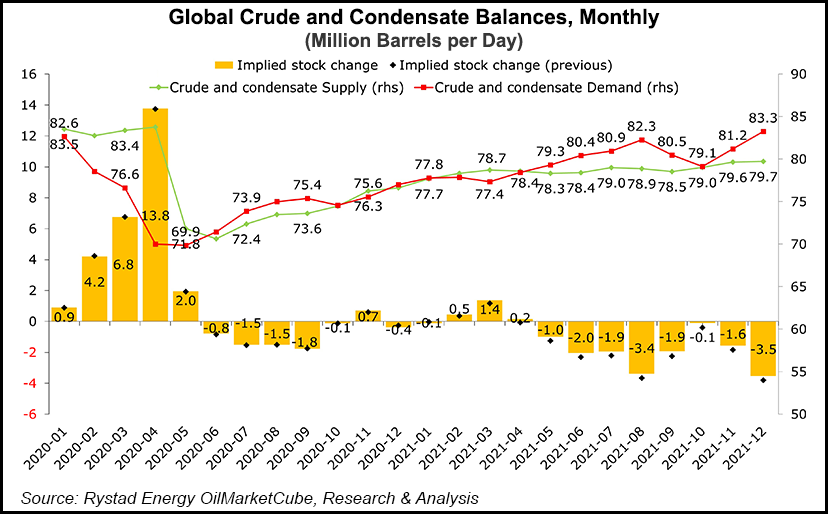 Raymond James & Associates Inc. analysts said Monday they expect “hefty” crude oil inventory draws in both 2021 and 2022, “which, by definition, is bullish for prices.”

The analyst team led by John Freeman and Pavel Polchanov said they expect West Texas Intermediate (WTI) crude to close 2021 at $65/bbl, “Which implies an average of $57 for the year (20% above the futures strip), followed by an average of $65 in 2022 (40% above the strip), with Brent at a modest premium.”

They cautioned, however, that a return to pre-pandemic global oil demand above 100 million b/d will depend on widespread vaccination against Covid-19. Since vaccine distribution is in the very early stages, it remains impossible to put a precise timetable on the end of lockdowns, the Raymond James team said.

“Broadly speaking, we anticipate that, after the tough wintertime period, demand recovery should resume this spring, with the second half of the year being markedly stronger than the first half,” researchers said.

“While some segments of the oil market (notably aviation) are unlikely to fully recover until 2023 at the earliest, we think that overall demand will reach 100 million b/d around the middle of 2022.”

The Raymond James team also noted that the Organization of the Petroleum Exporting Countries and its allies, aka OPEC-plus, can be expected to gradually unwind pandemic-induced production cuts as demand recovers.

However, Rystad expects “that vaccination campaigns will help bring a rapid recovery going forward,” the firm said in a late December research note. “Monthly supply deficits will start from May, reaching a high of around 3.4 million b/d in August.”

Researchers added, “As deficits continue uninterrupted through the year, August’s high could be repeated, if not exceeded by year-end.”

In its base case scenario, the Rystad team expects the oil market to be largely balanced in January, with supply and demand both hovering between 77.7 and 77.8 million b/d.

Rystad then is projecting surpluses of 500,000 b/d in February and 1.4 million b/d in March, followed by a “minor surplus” in April and a transition to undersupply in May.

They also highlighted that Iranian oil supply could return more quickly than anticipated in the base case, either because the Biden Administration “decides to remove sanctions altogether or because countries like China or India feel confident enough that the new administration will turn a blind eye to the existing sanctions and ramp up imports” from Iran, researchers said.

They continued, “We also assume stellar compliance within OPEC-plus going forward, as well as limited upside to U.S. supply and Iranian barrels coming back only in 2022.

“However, with the balances entering a period of acute deficit already in the second quarter of 2021, an upward revision to supply might be around the corner.”

“As we have warned our clients before, shale is a monster that you can slow down, but cannot kill,” Tonhaugen said.

The Rystad team cautioned, “There is always room for deviation from projections, especially in such a volatile environment as policies can change. The coming deficits will create extra room for OPEC-plus to hike production from May 2021 versus our base case, which in turn can affect monthly balances.

“OPEC-plus output, as usual, will have to fight for market share with U.S. shale, which is currently turning a corner with increased activity.”

Despite concerns over a new coronavirus strain, the TPH team noted that demand for crude oil and refined products appears to be recovering based on draws from storage last week for regions including North America, Europe and Asia.

For the week ended December 25, the U.S. Energy Information Administration reported a 6.1 million bbl decrease in commercial crude inventories versus the previous week.

The U.S. rig count, meanwhile, climbed three units week/week to 351 for the period ending Wednesday (Dec. 30), but was off from 796 rigs at the same time last year.