Sparked by an unprecedented downturn in the oil market, natural gas forward prices exploded higher during the April 16-22 period as the prospect of reduced gas production came into focus. 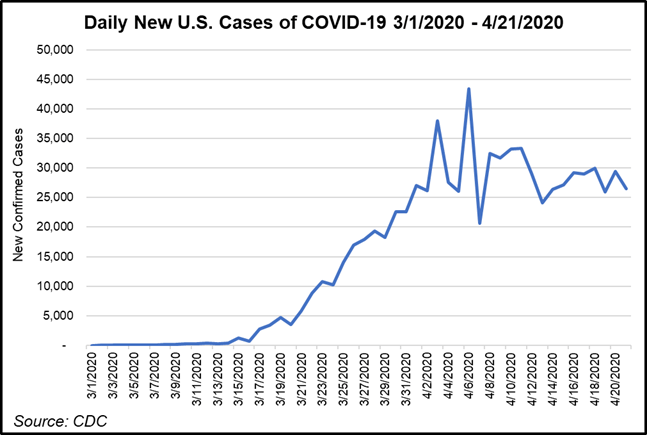 May forward prices shot up by an average 29 cents, with nearly as strong increases seen for the balance of summer (May-October) and next winter (November-March), according to NGI’s Forward Look.

The widespread rally in forward markets across the Lower 48 mirrored the substantial gains mounted in the futures market for the April 16-22 period, which ended with the May contract above the $1.90 mark and the balance of the year above $2. Nymex futures even sported a $3 handle for a couple of winter contracts in 2021.

“To many market participants, this may be confounding as the country is still in the grips of Covid-19 gridlock,” Mobius Risk Group said.

However, the firm said it’s important to consider that the spread between the remaining summer months and next winter is still relatively wide, which incentivizes a bid for the more nearby molecules and a concurrent offer for next winter. At the same time, the speculative community is likely turning its attention to Cal 2021, where there is “a distinct possibility” that the market is meaningfully undersupplied without any clarity on the amount of associated gas that may be available, according to the firm.

“Whether or not the upward momentum in Cal 2021 will remain hinges heavily on what daily fundamental data looks like in the first week of May,” Houston-based Mobius said. “At that point, the market will have a better sense of how much crude production is really being cut, and interestingly, visibility into this may very well come from natural gas pipeline bulletin boards.”

Also important during early May, according to Mobius, will be daily storage activity as the weather forecasts for the first week indicate true springlike weather should bring total degree days to a low point, and the demand side effects would be closely followed. If salt injections average more than 3 Bcf/d in the early part of the first week, the bid for the balance of 2020 strip and Cal 2021 could dry up temporarily.

“Conversely, if natural gas demand remains resilient and storage injections are muted, the century mark will be delayed and the rally may march onward,” Mobius said.

On Thursday, the Energy Information Administration (EIA) reported that natural gas storage inventories grew by 43 Bcf for the week ending April 17, well within the range of estimates but lower than both last year’s 92 Bcf injection and the five-year 49 Bcf build.

Bespoke Weather Services, which had projected a 41 Bcf injection, said after a string of huge misses, the latest data may mean the level of demand destruction from the coronavirus pandemic is being captured more properly now, “although this does not change the theme that supply/demand balances are wicked loose.

“Yes, some market estimates were higher, which is why we rate the report as ”neutral,’ given that it was actually a slightly lower build versus the market consensus, but the balance of the past few weeks still points at an impossible end-of-season storage level of 5-plus Tcf. Until we see changes in the balance, we find it difficult to construct a bullish case at the front of the curve.”

Broken down by region, the South Central led with a 29 Bcf build, including 15 Bcf into salt facilities and 14 Bcf into nonsalts, EIA said. The Pacific added 7 Bcf to inventories, while the Midwest added 6 Bcf. The East, meanwhile, reported that inventories were unchanged.

Total working gas in storage as of April 17 was 2,140 Bcf, 827 Bcf higher than last year and 364 Bcf above the five-year average, according to EIA.

Tudor, Pickering, Holt & Co. (TPH) analysts said natural gas demand, at least so far, has been relatively immune to the destruction seen across other fuels. “Our dissection of the demand data shows a Covid-19 related impact of just around 0.3 Bcf/d across the big three demand drivers of power, industrial and residential/commercial.”

The data suggests that gas is being “largely insulated by coal, which is taking the brunt of the demand hit,” according to TPH.

On the industrial side, analysts saw weather-adjusted demand destruction of only 0.3 Bcf/d over the past four weeks, materially below the 1.0 Bcf/d base assumption, “although it’s possible industrial demand exhibits a lag effect and demand could continue to soften over the coming weeks.” Residential/commercial demand showed “no discernible impact,” according to TPH.

“If these demand trends continue, it should be quite constructive for gas as oil shut-ins accelerate a drop in supply,” TPH said.

With U.S. crude’s freefall into negative territory setting the stage for a massive pullback in associated gas production, Permian Basin pricing mounted an impressive surge that extended across the forward curve, boosting even calendar year strips by the double digits, according to Forward Look.

Permian production has been the backbone of global supply growth for the past three years, setting the edge for productivity gains and driving down the global cost curve, according to Petro Lotus Energy Advisors.

“The base decline of Permian production is 51% in the first year. New wells decline at an even faster pace,” said Petro Lotus analyst Raymond Deacon. The Permian grows at oil prices above $50/bbl, and grows “very nicely” at close to $60/bbl, “but at these prices, it simply won’t,” the analyst said.

Rystad Energy’s Artem Abramov, head of Shale Research, said the natural base production decline, which can be seen as an absolute floor for production, becomes “an increasingly relevant production scenario” as little activity is expected to occur in the oil basins through June.

Until now, the Permian gas market, which currently produces close to 12 Bcf/d, has had to ride the “tenuous” line between how much gas is produced, which has remained relatively steady despite the plunging rig count, and the local demand and pipeline takeaway capacity available to absorb it, according to RBN Energy LLC. Producers have navigated the constraints by squeezing more into storage and serving more local power demand where possible.

However, RBN said many producers also have been forced at times to flare more gas or even curtail the less-efficient, legacy drier gas wells that don’t provide the value uplift of natural gas liquids or oil.

“May is going to be interesting to say the least,” RBN analyst Jason Ferguson said. “Prices have dropped to a level where it just doesn’t make sense to produce anything that isn’t hedged and/or committed. That could create some very interesting dynamics in the oil market, with offshoot impacts on natural gas as well.”

Interestingly, prices on the West Coast also posted substantial gains despite the market being in the midst of hydro season. The stout increases are likely because of forecasts for some of the hottest weather occurring in the Southwest and California. Temperatures from the Southwest into the Plains are expected to reach the 90s and 100s and remain near those levels through the early part of May, according to NatGasWeather.

Long suffering gas markets in Western Canada, a result of an oversupply of gas and little demand, also benefited from the oil market tailspin. Although gains at the front of the curve trailed Lower 48 markets, the rest of the curve met or beat gains seen at the U.S. benchmark.