Under current policies, oil and natural gas production will continue growing through 2050 amid rising global energy consumption driven by developing Asian economies, according to the latest long-term projections from the U.S. Energy Information Administration (EIA). 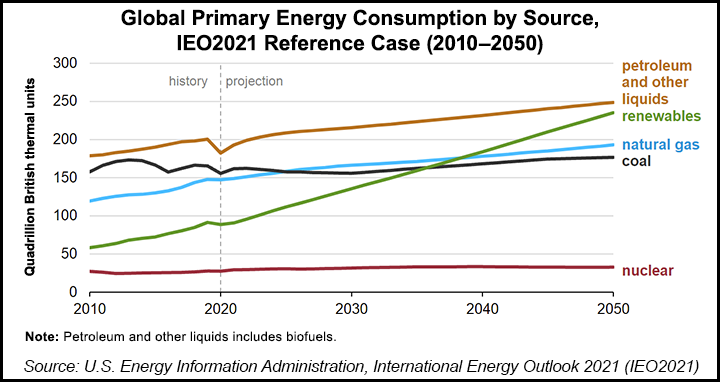 In its International Energy Outlook 2021(IEO2021) report published Wednesday, the agency predicted a nearly 50% increase in global energy use from 2020 to 2050. This is primarily a result of projected economic and population growth for nations outside of the Organization for Economic Cooperation and Development (OECD), particularly in non-OECD Asia.

Global natural gas production is expected to grow around 30% from 2020 to 2050, versus a 25% increase in output observed over the past decade, the agency said.

“Projected growth in global natural gas demand and the expansion of processing and transportation infrastructure around the world drives growth in natural gas production to 2050,” researchers said.

“Although use of natural gas for electric power generation increased by almost 30% from 2010 to 2020, this growth will likely plateau in 2030,” researchers said. “The role of natural gas in the electric power sector has become increasingly complex because of economic and policy trends that favor renewable energy.”

Some amount of future natural gas growth is also likely to coincide with higher crude oil production, according to EIA.

Liquid fuels consumption increases from 2020-2050 across not only the reference case but all side cases, including a “low economic growth” scenario. Production of petroleum and other liquids fuels should continue to rise to meet this growing worldwide energy demand — both from the Organization of the Petroleum Exporting Countries and from producing regions outside of the cartel, according to EIA.

“Although consumption in the Reference case reaches approximately 125 million b/d by 2050, consumption is highest in the High Economic Growth case, where it reaches approximately 151 million b/d of total liquid fuels in 2050, exhibiting significant growth from current levels,” researchers said. “Canada, Iran, Iraq and Russia all have large undeveloped crude oil resources and so could expand production to help meet 2050 global demand in the High Economic Growth case.

“Although Saudi Arabia and the United States are also large resource holders, their resources have been more systematically developed and likely have less room to expand beyond their historical levels of production.”

A Note on Climate Change

The IEO2021 projections do come with the potentially significant caveat that they reflect “only existing climate law” and assume no changes to current policy moving forward.

“Our Reference case can serve as a base to assess possible legislated energy sector policies as IEO side cases,” researchers noted.

EIA accounted for “multiple net-zero and fossil-fuel-reduction goals and policies” announced since the agency developed its 2019 IEO projections.

“These goals and policies are especially prevalent in OECD countries and in the electricity and industrial sectors,” researchers said. “As countries enact these policies, our assumptions project an increased prevalence of higher efficiency technologies” that would curb consumption growth. “In addition, it becomes more economically favorable to use less carbon-intensive sources of energy to meet demand.”

With that in mind, the IEO 2021 Reference case still sees emissions rising throughout the projection period, albeit slowed by a combination of policy, growth in renewables and higher energy efficiency.

Carbon intensity — how much carbon is emitted for the energy consumed — is set to decline during the projection period, especially for non-OECD Asian countries on a combination of higher renewable energy and efficiency gains, according to EIA.

“However, the average carbon intensity across non-OECD countries remains higher than that of OECD countries through 2050, mainly because of a higher retention of fossil fuels — particularly coal,” researchers said.

“This projected growth in renewables is uncertain and may largely depend on changes to regulatory policies and market rules, large and cost-effective supply chains to support renewable installations and a sufficient amount of conventional generation technologies or storage to back intermittent renewable capacity,” researchers said.

Incorporating more intermittent renewable energy into the electrical grid will see different regions turn to varying combinations of resources to provide a backstop, according to EIA.

“An example of these differences can be seen in India, where by 2050, we project intermittent generation — mostly solar — will account for two-thirds of the electricity generation mix,” EIA said. “To accommodate that trend, about 330 GW, or about half of the world’s projected battery storage capacity in 2050, will be required to support a system with such a high level of solar power generation.”

Canada, with its limited sunlight in the fall and winter, provides a contrasting example where wind figures to be more economic than solar.