Oil and natural gas activity in Texas, southern New Mexico and northern Louisiana fell off a cliff in the first three months of the year, unsurprising news from the Federal Reserve Bank of Dallas. 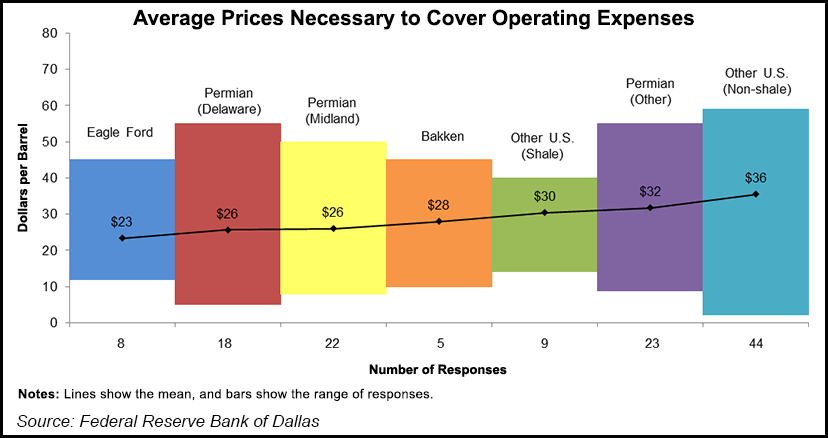 The Dallas Fed, as it is known, issued its quarterly energy survey on Wednesday. The Eleventh Federal Reserve District every three months queries oil and natural gas executives in the biggest overall producing area of the country about business conditions. The companies surveyed are headquartered in the district, but many also have national and global operations.

In a series of questions about business conditions, executives were blunt about what’s facing them. Said one, “Covid-19 does not affect us as much as the oil price war” being waged between Russia and the Saudi-led Organization of the Petroleum Exporting Countries (OPEC).

“My outlook on the domestic oil and gas industry has never been bleaker,” said another executive. Another predicted “oil prices will be $15/bbl before OPEC or Russia cries uncle.”

One respondent thought the sharp pullback would “weed out the Ponzi guys in the shale plays. There’s lots of capital destruction occurring. Bankruptcy will be common if this lasts a year or so… Many good jobs will be lost.”

Asked their views about Henry Hub natural gas prices and what level they are expected to be by year’s end, slightly more than 40% said they should average $2.00-2.49/Mcf.

At the time of the survey, spot gas prices were averaging $1.84.

“The economics for producing natural gas are another disaster,” said one executive in response to the question. “Gas purchasers are adding deductions in Oklahoma. Lessors in West Texas are creating ”pseudo-companies’ to force operators to contract services through them and then taking a cut on everything. Their 25% royalty isn’t satisfying enough, so they’ll get premature abandonment on their wells instead!”

The price of natural gas “has the biggest impact on us,” another executive said in the survey.

The overall index plunged to minus 50.9 from minus 4.2 in the fourth quarter, the lowest reading in the survey’s four-year history.

Asked how Covid-19 had changed the outlooks in key areas, 78% of executives surveyed said they had revised their outlooks down, with 49% significantly reducing forecasts. Similarly, 67% revised down expectations for capital spending (capex).

“A majority of firms have revised down their expectations for their firms’ oil production, capital expenditures and company outlook,” Plante said.

Meanwhile, the oil production index slumped sequentially to minus 26.4, down by a whopping 51 points. The natural gas production index also turned negative at minus 21.2, reversing from positive territory in 4Q2019 of 15.6. Among the OFS firms, all indexes pointed to worsening conditions.

“The average breakeven price for new wells was a little under $50, and current oil prices are well below almost all of the responses,” Plante said. “Likewise, based on the survey responses, many firms will find it difficult to cover operating expenses at current prices.”

Asked what West Texas Intermediate (WTI) crude price would be needed to profitability drill a well, executives on average said they needed $49, slightly lower than the $50 price when asked the same question for the 1Q2019 survey. Across regions, the average breakeven prices to profitably drill a well was $46-52. Breakeven prices in the Permian Basin averaged $49.

“With the recent oil price decline, almost no firms that responded can profitably drill a new well at the average WTI spot price for the week ending March 20 ($24),” economists noted.

Conditions also have worsened for OFS firms, which have cut their outlooks in line with their E&P customers.

“The equipment utilization index fell from minus 25.8 in the fourth quarter to minus 47.2 in the first,” the Dallas Fed noted. “Input costs fell in the first quarter from 1.7 to minus 11.3. However, the index of prices received for services slid further into negative territory, from minus 24.5 to minus 37.7. The operating margins index also became more negative, from minus 39.7 to minus 50.0.”

Also not unexpected: employment contracted further from the final quarter of 2019, the Dallas Fed noted.

The company outlook index fell to minus 75 points from 4Q2019’s positive 77 points. The uncertainty index in turn jumped 38 points to 63.8, pointing to heightened uncertainty regarding operator outlooks.