U.S. explorers during October increased their oil and gas permit requests for the third month in a row, with an uptick in developing leaseholds on federal lands, according to Evercore ISI. 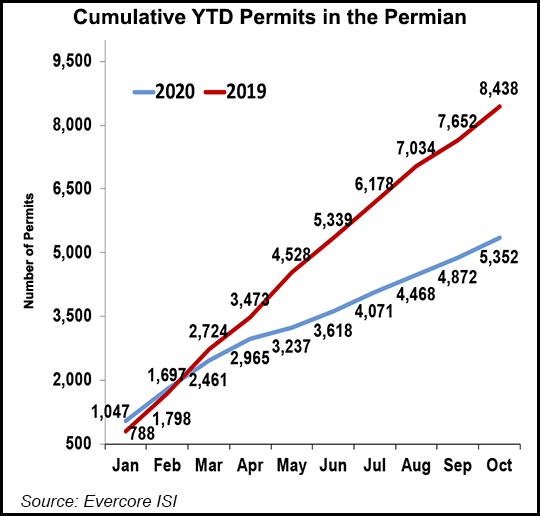 The analyst firm each month provides data using state and federal sources regarding permits for oil and gas wells, plugging and abandoned (P&A) wells approved and detailed variances of onshore and offshore permitting.

The gains in federal land requests preceded the election of Democrat Joseph R. Biden Jr., who has said he would seek to ban drilling on federal lands.

U.S. applications by exploration and production (E&P) companies accelerated 25% month/month (m/m) in October, “which is the largest monthly increase so far in 2020,” Evercore analysts said.

The increase mainly was driven by the Permian Basin, with permits up 76 over September. Requests to drill on federal lands in the Permian jumped by 19% m/m, according to Evercore.

Operators filed 1,301 permits in oil formations, up by 199 from September, with 46% approved for the Permian and the Eagle Ford Shale.

Leading up to the U.S. election, Evercore noted that Devon Energy Corp. boosted its permit activity in the Permian by 15 m/m in October, “as it pressed ahead with plans to receive regulatory approval of 650 federal permits by year-end.”
Concho Resources Inc. and Occidental Petroleum Corp. (Oxy) “ramped their permits to a new 2020 peak in October,” analysts said. Oxy “scaled up applications to 63 (plus 40 m/m) with the bulk of permits focused mainly in New Mexico.”

Even though Concho’s federal acreage represents only 20% of inventory, “it added applications to cover drilling plans in the basin for the next two years,” according to Evercore. The operator filed 58 permits in October, up by 36 m/m, “and has received approval for 285 wells year-to-date.”

The Bakken permit count rose to 73 during October, up by 20 from September, “which is only 3% lower from January,” said analysts. “Incremental activity was primarily driven by ConocoPhillips,” up by 28 m/m, and the October count “reached the highest level so far this year.”

Overall, permitted wells in oil formations had declined through October by 67% year/year (y/y) to 14,656, primarily from a “collapse in the Powder River Basin,” which had plunged by 67%, Evercore noted.

Permian activity through October stood at 5,353, off by 37% y/y. The pullback was driven by “sharp reductions” at ExxonMobil, off by 52%, Marathon Oil Co., down 75%, and ConocoPhillips, whose permitting activity was 61% lower.

The joint permit count by ExxonMobil, Marathon and ConocoPhillips, three of the biggest Permian operators, had “fallen to 435 from 1,012” through the first 10 months.
Additional permit pullbacks in the Permian have been implemented by Oxy (down 21% y/y) and EOG Resources Inc., off by 9%.

According to Evercore, the energy majors had reduced their Permian drilling permit applications by 52% y/y through October.

Meanwhile, public E&Ps working in Appalachia’s Marcellus Shale increased their permitting activity by 1,038% from September, according to the data.

Natural gas prices are forecast to strengthen, along with activity in the gassy formations of the Marcellus and Utica shales, and the Haynesville Shale.

Overall, state regulators during October granted 220 permits in Lower 48 gas formations, up by 98% from September, with “a strong recovery in the Marcellus and the Utica, where applications are returning to 1Q2020 levels,” said Evercore analysts.

Public operators submitted 75% of the October permits in the Appalachian plays, Evercore noted. Meanwhile, Utica permit activity was higher at 27, an increase of 13 over September, “trending upward for the second consecutive month.”

In the Haynesville, the permit recovery was driven by BP plc, which requested five more permits than in October, and by Comstock Resources Inc., which requested 10 permits, the data showed.

Year-to-date, however, permits in gas formations have decreased to 1,803, down by half y/y, according to Evercore.

P&A permit activity remains solid in the Permian, with regulators in Texas and New Mexico approving 876 wells, up 169 m/m. It was the second consecutive month of gains, said analysts.

The Railroad Commission of Texas reported “significant” P&A permit growth in District 8, the center of activity in Midland, which was up 76% m/m. New Mexico regulators also granted 19 P&A permits to Chevron Corp., “the largest set since January 2019.”

Still, the Bakken Shale posted a reduction in P&A well permitting, down 19 m/m to 28, which Evercore attributed to “fewer applications by private companies,” which fell by 11.