Cargoes from and to the U.S. oil and gas patch are filling up a lot more rail cars than they were one year ago, according to data from the Association of American Railroads (AAR), continuing a trend of increasing rail crude oil movement that began in 2009. 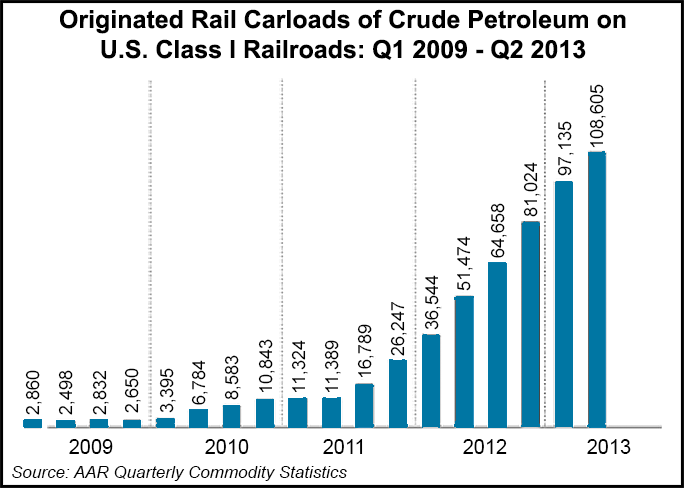 Based on the number of rail cars, U.S. rail traffic carrying “petroleum and petroleum products” is up nearly 38% year-to-date from a year ago and was up 8% for the week ending Sept. 21 from the same period a year ago.

The number of cars carrying “nonmetallic minerals and products,” a category that includes sand used for proppant in hydraulic fracturing (see Shale Daily, Aug. 23; Aug. 15), was up 5% for the week and is up 7.2% year to date.

Six of the 10 carload commodity groups tracked by AAR posted increases compared with the same week in 2012, led by petroleum and petroleum products, with 12,767 carloads. Commodities showing a decrease compared with the same week last year included grain, with 15,684 carloads, down 21.3%. Coal car traffic in the United States was down 4.9% for the week and is down 4.1% year-to-date.

Small amounts of crude oil have long been transported by rail, but since 2009 the increase in rail crude oil movements has been significant, AAR said. “As recently as 2008, U.S. Class I railroads (including the U.S. Class I subsidiaries of Canadian railroads) originated just 9,500 carloads of crude oil. By 2011, carloads originated were up to nearly 66,000, and in 2012 they surged to nearly 234,000,” said AAR spokeswoman Holly Arthur.

BNSF Railway CEO Matt Rose said at the North Dakota Petroleum Council annual meeting that his company will spend $4.3 billion this year to improve its system and plans to invest $400 million in the next 18 months to increase its capacity to ship oil, the Associated Press reported.