Rystad Energy is forecasting oil and gas drillers to reach for the moon and beyond in the next five years, at least in terms of drilling depths, with North America’s shale and tight resources propelling it into a “league of its own.” 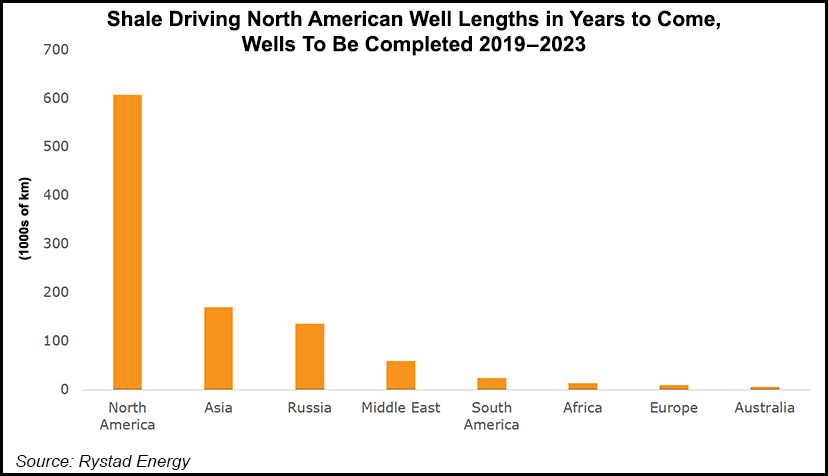 Analysts expect more than 621,000 miles (1 million kilometers) of global oil and natural gas wells will be drilled through 2023, with their collective depth estimated as the equivalent of 25 times around the equator, or 2.5 times the distance to the moon.

“North America will be in a league of its own thanks to the shale boom,” said head of consulting Erik Reiso. “Nearly six in 10 new wells on the continent will be drilled in shale basins.”

North American wells “are typically longer than other supply segment wells. This helps explain why shale wells represent around 80% of the distance drilled in North America by 2023.”

Using its proprietary WellCube database, Rystad’s team estimated that the number of onshore and offshore wells drilled globally is expected to increase to around 65,000 in 2019. Activity levels are then projected to remain around this level through 2023.

As the global oil and gas industry moves into a higher gear, in part of stronger oil prices, demand for steel is set to increase, tied to the rising need for steel casing commonly used in oil and gas wells to prevent them from collapsing or getting damaged.

“Whereas the top four offshore operators will add a quarter of new offshore wells going forward, the top 10 in the onshore market only represent around one-third of new wells from 2019 to 2023, implying a much more diversified player landscape.”