Operations at oil and natural gas wells in Pennsylvania harmed water supplies more than 200 times between December 2007 and May of this year, according to data compiled by the state Department of Environmental Protection (DEP). 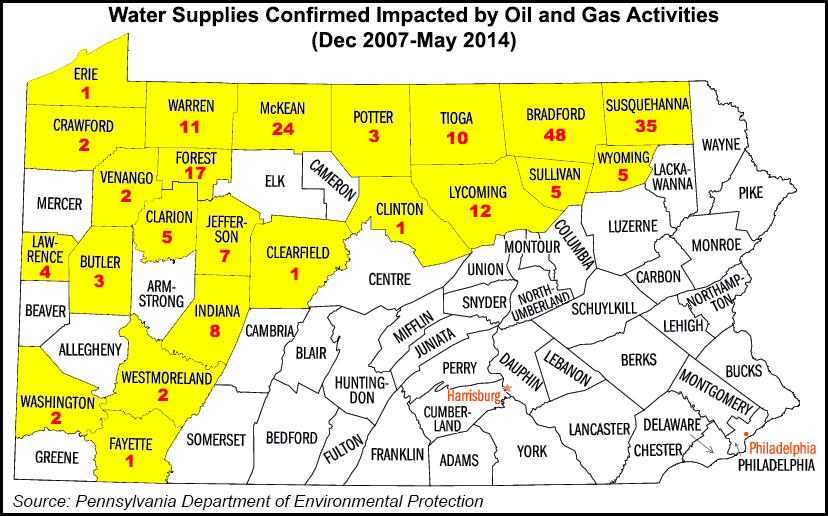 According to the DEP, water supplies were damaged 209 times during the time frame, with Bradford County topping the list with 48 incidents. Susquehanna County had the second-highest number of incidents at 35, followed by McKean and Forest counties, at 24 and 17 incidents, respectively.

Other counties that had damaged water supplies from oil and gas operations included Lycoming (12 incidents), Warren (11), Tioga (10), Indiana (8) and Jefferson (7). Elsewhere, Clarion, Sullivan and Wyoming counties each had five incidents; Lawrence County had four; Butler and Potter counties each had three; Crawford, Venango, Washington and Westmoreland each had two, and Clearfield, Clinton, Erie and Fayette each had one.

The DEP did not disclose the names of the operators involved in the incidents or the chemicals that were detected in the water supplies.

Morgan Wagner, spokeswoman for the DEP, told NGI’s Shale Daily that during the period of time covered by the impact data, drilling has commenced on more than 20,070 wells across the state. That figure includes 12,068 conventional and 8,002 unconventional wells.

“The department will be posting this information online by the end of the month and will update the public list as new determinations are made,” Wagner said Tuesday. “This frequently requested information is being shared with the public in our continued effort to be as open and transparent as possible.”

Patrick Creighton, spokesman for the Marcellus Shale Coalition (MSC), said the DEP’s data shows that more than 99% of the oil and gas wells drilled in Pennsylvania have had no impact on water supplies.

“We also believe that transparency and making data like this, with appropriate context, publically available is critical,” Creighton said. “Our industry remains committed to working with key stakeholders, including DEP, to further protect and enhance our environment while safely producing clean-burning natural gas.”

“Given the fact that Pennsylvania does not have private well water construction standards, along with the region’s unique geology with high-levels of shallow methane, these tests provide homeowners and shale producers important water quality and public health-related information,” Creighton said, adding that MSC “continues to support the adoption of statewide water well construction standards, as Pennsylvania is one of only two states without such requirements.”

Water issues, and their interconnection with development of the Marcellus Shale in Pennsylvania, have been at the forefront of the news in recent weeks.

This month, Gov. Tom Corbett signed a $29.1 billion state budget that cuts more than half of the state’s funding to the Delaware River Basin Commission. Meanwhile, the Pennsylvania Fish and Boat Commission said it needs another $1 million to aid in its mission to keep the state’s waterways clean (see Shale Daily, July 21; July 18).