The “great land grab,” a hallmark of the early onshore unconventional renaissance, is making a big-time comeback in the Permian Basin, even with commodity prices still low. 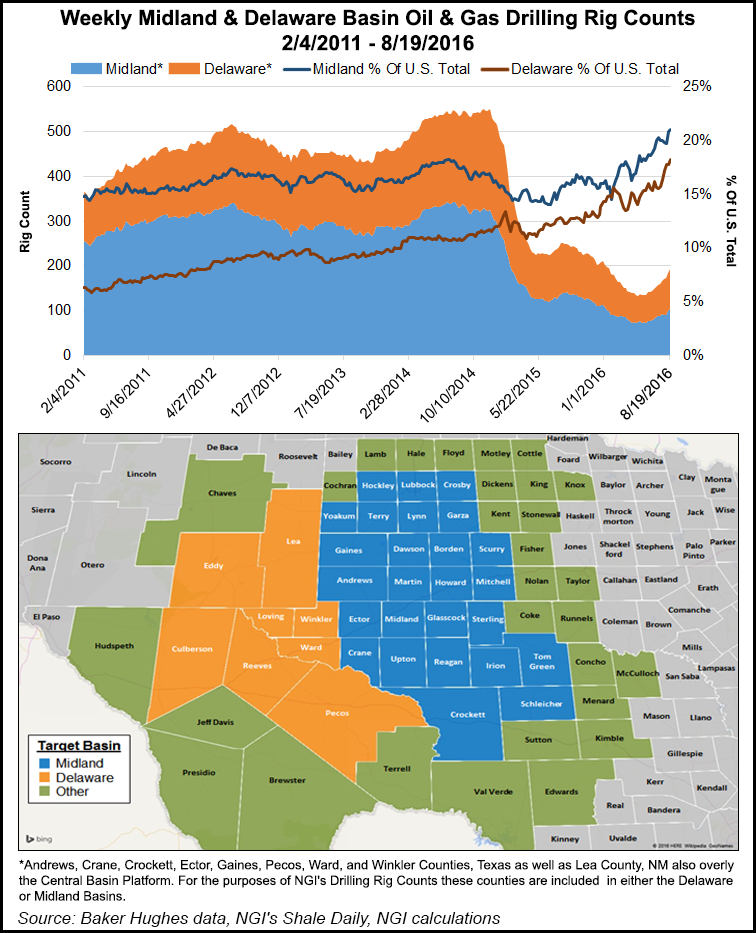 The massive formation that straddles West Texas and southeastern New Mexico led acquisition activity in the first half of this year (see Daily GPI, Aug. 11). By any measure, the basin is in high gear to lead in the last six months — and at sharply rising prices. Most of the buying is for leasehold in two sub-basins, the Delaware and the Midland, but the Central Basin Platform (CBP) also is seeing action.

Exploration and production companies appeared eager to place their flags in the legacy play during 2Q2016, with its myriad reservoirs now undergoing testing to tap oil, condensate and, to a lesser extent, natural gas, for decades. According to the U.S. Energy Information Administration, the Permian is set to easily eclipse every onshore region for oil production in August and September, with its natural gas output second only to the Marcellus Shale (see Shale Daily, Aug. 15).

Putting the spotlight on North America’s hottest play, NGI’s just released special report Permian: ”The Mother Lode’ — Texas Play Heats Up as Industry Looks to Get Back to Work takes a closer look at who’s doing what, where, and for how much in the play.

Resolute Energy Corp. CEO Nick Sutton, during a conference call in August to discuss 2Q2016 results, summed up the reasons for all things Permian.

“For comparative purposes, given the results from the wells that are drilling today in Texas, a single Permian Basin well adds more production to the company than all of the Wyoming assets that we sold in 2015,” Sutton said. High volumes and relatively low lease operating expenses (LOE) mean “production from our Permian Basin wells is significantly more profitable than our legacy operations.”

Of all the U.S. regions that Plains All American Pipeline LP serves today, the Permian is “the one area that appears to be the most resilient, if not actually kind of over-performing a little bit,” CEO Greg Armstrong said during a second quarter call. “The results from the wells that are being reported are stronger.”

Permian production could be even better, he said, if global supply and demand were in sync.

“We’re all going to have to monitor the demand…in the world for crude oil in general. And if the answer is we’re the swing producer, the Permian is the best place to get it…”

Said Permian heavyweight Pioneer Natural Resources Inc. CEO Scott Sheffield in July: “The Permian is the mother lode. You factor in 4,000 feet of shales with 12 to 14 zones to play with…We’ll be drilling that for the next 100, 150 years” (see Shale Daily, July 20).

Lower well costs, higher estimated ultimate recoveries, and solid internal rates of return are fait accompli in the Permian. Other parts of the U.S. onshore remain economical, but infrastructure provides the best economics.

Legacy oil and natural gas operations have been underway for decades in the Permian. In recent years, with the advent of unconventional drilling techniques and the rise in oil prices, the long-drilled land has become even more valuable.

Initially the acquisitions focused mostly on the Midland sub-basin — and many deals still target the formation. Each of the three sub-basins are attracting drill bits, with the reservoirs within each — including the Wolfcamp, which traverses all three major basins — drawing interest. Benches within the Spraberry and Cline also are high on explorers’ lists.

The Permian is the center of the “great land grab” today, said NGI‘s Patrick Rau, director of strategy and research. “My biggest takeaway is just how quickly acreage prices have been rising in the Delaware Basin.”

Energen Corp., which bolted on more Delaware land in July, has indicated its basin holdings are worth “more than that,” Rau said (see Shale Daily, Aug. 9). RSP Permian Inc., which also added Delaware leases in July, “noted that $30,000-plus pricing there is justified” (see Shale Daily, Aug. 11). “For that price, you have to feel comfortable that several intervals will work.”

Deal-making was hot during the second quarter but it’s yet to cool. In the past week, Denver-based PDC Energy Inc. agreed to pay $1.5 billion to acquire Arris Petroleum and 299 Resources, managed by private equity-backed Kimmeridge Energy Management Co., giving it about 57,000 net acres in the Delaware (see Shale Daily, Aug. 24).

Since the beginning of August, prices paid are moving higher:

Drilling in the Permian’s Midland and Delaware Basins took a hit during the recent commodities price crunch along with everywhere else in the country, but that that doesn’t tell the whole story.

Why the Rapid Hike in Acreage Values?

“It sounds to me like a combination of the Delaware being one of the only plays that is economic in today’s environment, with massive gains in drilling and completion techniques, and a growth of infrastructure out of the region,” Rau said. “The first argument speaks for itself. Practically every operator is gushing about how more sand, longer laterals, and diverter technology is really improving things.”

Coker Palmer Institutional (CPI) analysts, following EnerCom’s The Oil & Gas Conference recently in Denver, said the macro conversation was all about acquisition activity in the Permian. An anecdotal survey found many observers saying the prices paid in the Permian are ‘crazy’…but in an industry “often run by engineers (or financial people, even worse!), we all failed to miss the massive improvements in well productivity, well density and more productive rock strata.

“Thus buyers a year or two ago, who might have paid $20,000/acre (and $30,000/flowing boe), were looking forward and betting on better well productivity and more wells and in some cases are generating substantial returns. In other words, those investors were, in the words of The Great One [Wayne] Gretzky ‘skating to where the puck will be,’” CPI analysts said.

“So if someone is paying $30,000+/acre (and $35,000/flowing boe), perhaps they too are skating to where the drilling ‘puck’ is going to be. And while engineers often shake their heads at extrapolation without data, Gretzky was no engineer.”

Legacy Permian operator Apache Corp. drilled its best-ever well in history in the Delaware during the second quarter (see Shale Daily,Aug. 5). But there’s more than only good wells to like about West Texas, CEO John Christmann said.

“Apache’s cash margins in the Permian averaged approximately $17/boe in the second quarter, which is more than double those in the rest of North America,” he said.

“Our Delaware Basin development program has been very successful,” Resolute’s Sutton said. Seven of the original nine wells had been completed by early August, with five hitting initial production rates sharply above expectations. “Equally impressive is the stability of the production profiles of these wells,” he said.

“The combination of high quality rock, cost control and execution on our Permian Basin drilling program has created significant value,” Sutton said. “Based on an internal evaluation of our first five Wolfcamp A wells, we estimate that these five wells have added approximately 14.5 million boe of reserves, net to Resolute, including offset undeveloped locations.”

Costs continue to decline across the onshore, but nowhere is it making as big a difference as in the Permian, with substantial infrastructure in place to move product. Many producers have used downtime to experiment with fracturing techniques and laterals, along with multi-pad drilling.

Devon COO Tony Vaughn said one of the biggest things that’s changed in the Delaware has been the infrastructure buildout in the past eight to 12 months.

For “the majority of our work now we have power grid systems to all of our wells. We also have the majority of our fluid being transported by pipe,” Vaughn said. Because of infrastructure, LOE/boe cost “has dramatically dropped from over $16/bbl down to the $8 type number over that period of time…There are no local takeaway issues associated with our work that we anticipate doing in the next couple years.

“Really, the Delaware has now caught up to that infrastructure and the returns are good. The cost to drill and complete wells is down, and certainly the monthly recurring lease operating cost is down,” he said.

“There is still more room for improved efficiencies in the Delaware, as many operators are still experimenting with new drilling and completion techniques,” Rau said. “Anadarko Petroleum Corp. noted recovery factors in the Delaware are very low, perhaps just 5%” (see Shale Daily, July 27).

Success across the Permian may not be uniform, however, said Rau. Parsley, during its 2Q2016 call, said the geologic complexity is greater in the Delaware than in the Midland. Devon management mentioned that it is more difficult to drill longer laterals further north in New Mexico’s Eddy and Lea counties.

Still, horizontal drilling is picking up, including in the CBP, “which is a lower decline interval, and one that tends to be drilled vertically,” Rau said. Occidental Petroleum Corp., as an example, recently drilled and completed two horizontals in the CBP, “with another six-to-eight wells likely” (see Shale Daily, Aug. 3b). Ring Energy Inc. “is preparing to drill three horizontal wells in the CBP as well.”

Still Seats at the Table?

It’s not too late to get a piece of the action, either. WPX indicated that initial public offerings “are lining up,” Rau said. And Parsley management also “noted there is a lot of private equity money” ready to go.

Overall activity is down sharply from mid-2014. In Texas, total drilling from July through December is expected to improve 8.9% from the first six months to about 3,185 wells, but that still would be down 46% from the last half of 2015. However, it won’t be the Permian taking the brunt of the hit, but its sister to the South, the Eagle Ford Shale. The three Permian districts overseen by the Railroad Commission of Texas expect to see much more drilling from a year ago — up 21% in District 7C; 15.5% in District 8 and 10.6% in District 8A.

EnLink Midstream, which began working on infrastructure in the Midland a few years ago, in early August partnered with an affiliate of NGP Natural Resources XI LP to expand natural gas gathering services in the Delaware (see Shale Daily, Aug. 2). CEO Barry Davis said the partnership made sense because of the sustained downcycle, but it also opened an “abundance of opportunities in the Delaware…We think that the play just gets better by the day…We also think that eventually there is going to be a consolidation, and there’s going to be opportunities for us to acquire other assets.”

CPI analysts said it all in a recent note. “Nearly every Permian equity offering has worked this year, so plan accordingly.”