Oil and gas executives are more pessimistic than they were a year ago about crude oil prices and only slightly more enthusiastic about a bump in natural gas prices, according to a survey by Deloitte. 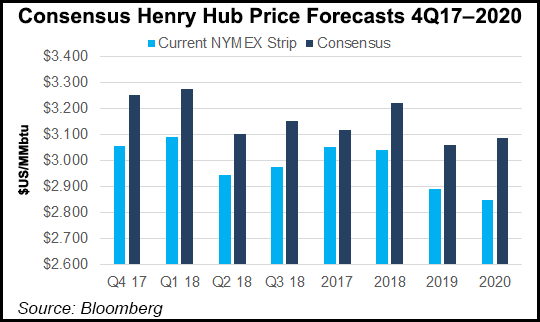 The consulting firm’s 2017 Oil & Gas Executive Survey was released Wednesday, with most exercising caution as they wait for the market to rebalance.

Confidence in a “quick industry recovery seems to have materially shifted” to more caution, Deloitte’s researchers said. “With lower expectations of a rapid price recovery, the need by many to find new efficiency gains and reduce costs could push the digital revolution to its tipping point.”

The latest findings contrast with previous views that the “moderate-growth global macroeconomic outlook” for the past two years remained unchanged. Executives surveyed last year were more hopeful for a strong recovery, but this year’s survey results “indicate the oil and gas sector seems to have been hit disproportionately harder when compared to the broader economic outlook.”

Executives “across the oil and gas value chain” were more cautions about the state of the industry and said business strategies were needed to adapt accordingly.

“The slow road back has gotten longer,” said Deloitte LLP Vice Chairman John England, U.S. energy and resources leader. “The protracted holding pattern we’ve been in for the last two years seems to have shaken executives’ confidence in every sector — upstream, midstream and downstream.

“As the industry hunkers down to focus on cost reduction and productivity, one silver lining may be a drive to the next wave of digital technology adoption to uncover new efficiencies important to success.”

Among the key findings:

“Given the more cautious price outlook, most respondents noted maintaining or increasing current production levels as their foremost priority for strategic focus for upstream companies in 2017â€“2018, followed by reducing general and administrative expenses and total expenditures,” Deloitte’s survey found.

About half of the respondents are forecasting OFS and supply costs to be the biggest factors impacting cost structures in 2017 and 2018, followed by increased well productivity (42%) and digital technology (31%).

Around 41% anticipate job losses in 2018, while about the same expect headcounts to remain the same. Fewer believe that direct headcount changes will have as big of an impact on costs in 2018 versus 2017.

Of the midstream executives surveyed, more than half (56%) are expecting to cut capex in 2018 versus 2016. Only one in eight expect an increase over the next year.

“Pipelines are seen as the best opportunity for growth in 2018, with the majority continuing to view the Gulf Coast as the most productive (49%), followed by U.S. Midwest and Appalachia (42%),” researchers said.

Of greatest concern to the midstream executives were environmental issues (47%) and controlling costs (46%), followed by regulations (41%). However, nearly half (49%) expect their leading opportunities in the future to be expanding infrastructure needs and new markets, such as liquefied natural gas (LNG) or industrial sites (43%).

Downstream executives are slightly less likely to expect reductions in capex (45%) compared to the upstream and midstream sectors. Increased exports (58%) and low oil prices stimulating the economy (53%) topped the list of opportunities.

Refinery margins by the end of 2018 are forecast to be mostly in line with current margins, with a majority (52%) expecting margins of $15-25/bbl. The biggest downstream challenges were costs (46%), environmental issues (38%) and regulations (38 percent).

“Increased fuel efficiency (53%), followed by use of compressed natural gas/LNG in trucking and shipping industries (47%) and broader adoption of electric vehicles (41%) are viewed as having the biggest impact on downstream product demand over the next five years,” the survey found.

More than half of the upstream executives surveyed, 55%, see improving operational efficiencies as the best path forward for sustained cost reductions.

“Additional Deloitte research indicates that although many companies are seeing value in digitizing operations to find new opportunities and drive efficiencies, cut costs and increase safety and productivity — especially when they have exhausted other means — they are still immature on the adoption curve, compared to other industries.”

A 1% gain in capital productivity could translate into savings of about $40 billion, according to Deloitte. For perspective, listed pure-play upstream, integrated and OFS operators worldwide reported a cumulative net loss of about $35 billion in 2016.

“The new reality seems to have set in; waiting for a significant price recovery may be a long haul,” said Deloitte’s Andrew Slaughter, executive director of the Center for Energy Solutions. “It possibly has never been truer now that the low-cost producers are the winners. The bottom line is that companies should focus on cost discipline and operational efficiency. Digitization is likely the next frontier in this new normal, offering a lifeline for new efficiencies, cost reductions and productivity.”