With more than 66% of oil and gas companies preparing to fundamentally reinvent business over the next three years, those proposing the most radical transformations may see double the revenue and margin growth compared to those least committed to change, according to a new report. 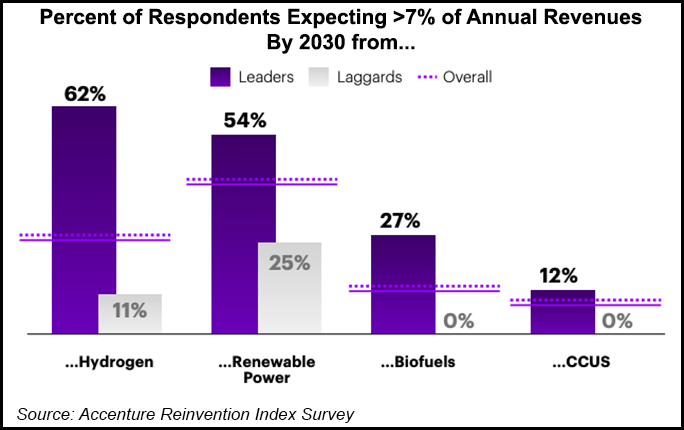 The report, “Necessity is the Mother of (Re)invention” from Accenture plc, outlines some of the best practices companies should adopt for the energy transition. Oil and gas businesses leading the way in the top 10% of the 200 businesses sampled are setting the stage with more ambitious actions.

According to Accenture, leading companies could see a minimum margin growth of 7% on average in the next three years, compared to the bottom 25% that may only generate 3% growth.

Further, leading corporations could see revenue growth at a minimum of 11%, compared to only 6% for those companies trailing behind.

Following the Covid-19 pandemic, all of the leading companies expect at least a few significant changes to business, and half are preparing for radical reinventions. Only 9% of companies that are falling behind are preparing for transformative remodeling.

Almost seven out of 10 leading companies suggest an enterprise-wide transformation is essential to reinvention, and 77% of these enterprises see cloud-based services as essential to their business reinvention plans in the next three years.

Ashraf suggested that businesses should undertake wholesale reinventions of business, and a gradual reinvention will not suffice. Specifically, oil and gas companies that aim for carbon neutrality are more likely to thrive. More than one-third of all oil and gas businesses, including the leading 10%, could see margin improvements of at least 20% from their low-carbon businesses within the next three years.

The report found that 62% of leading oil and gas businesses expect growth of at least 7% from hydrogen. It also found that 54% of the leading companies expect a minimum growth of 7% from renewables. Meanwhile, only 27% of the leading companies hold the same expectation for biofuels. Of those falling behind on transformative policies, only 25% expect to see the same growth for renewables, less than 15% expect a growth of 7% from hydrogen, and none of the stragglers expect biofuels to account for at least 7% of revenues.

Nearly all oil and gas enterprises sampled claimed that environmental performance as well as altering investments, operations and products will be a priority. Most leading businesses have committed to “ambitious” environmental, social and corporate governance (ESG) targets. Companies leading the way projected that ESG performance would have a strong connection to their competitiveness over the next three years.

On the other hand, only half of businesses falling behind have set ESG targets. Only 47% of those lagging behind regularly report ESG performance, according to Accenture.

“This decade will be a make-or-break period for the oil and gas industry, which remains rutted in a low-price environment, but the opportunities presented in the report provide a blueprint for reinvention for continued success,” Ashraf said. “All oil and gas companies should aim to emulate the reinvention leaders to maintain relevance during and after the energy transition. Otherwise, the transition will transform from an opportunity to build a sustainable and profitable future to an existential risk.”