The steep downward slope in U.S. drilling activity the past three months showed signs of leveling off during the week ended Friday (June 12) as the domestic count dropped a relatively modest five rigs, according to the latest numbers from Baker Hughes Co. (BKR). 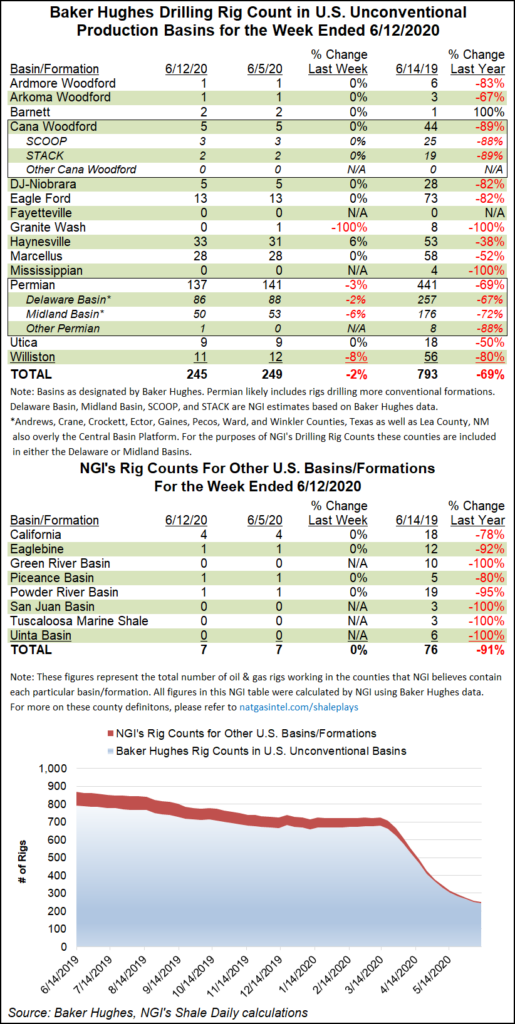 A seven-rig decline in oil-directed drilling was partially offset by the addition of two natural gas-directed units, leaving the overall domestic rig count at 279 for the week, down from 969 in the year-ago period. Since March 13, the U.S. rig count has fallen more than 500 units amid the economic fallout of the Covid-19 pandemic.

For the most recent week, seven horizontal units and two directional units exited the patch, partially offset by the return of four vertical units. Gulf of Mexico activity held steady at 13 units, down from 24 a year ago.

The Canadian rig count was unchanged at 21 for the week, versus 107 a year ago. The combined North American count ended at 300, down from 1,076 at this time last year.

Among major plays, the Permian Basin posted the largest weekly change, dropping four units to end at 137, off from 441 a year ago. The Haynesville Shale added two rigs week/week, while the Granite Wash and Williston Basin each dropped one.

Among states, Pennsylvania added two rigs to its total for the week, climbing to 22, versus 39 in the year-ago period.

New Mexico and West Virginia each dropped two rigs, while North Dakota, Oklahoma and Texas each dropped one, according to BKR data.

The Permian Basin in May reported the largest monthly decline in oil and gas permits ever, down 47% from April, as applications by large-cap operators fell to their lowest levels in history, off by almost three-quarters, Evercore ISI said earlier in the week.

In Evercore’s monthly permit report covering U.S. activity across the country and in the Gulf of Mexico, analyst James West and his team said domestic activity plummeted to 1,072, off by 53% month/month and 63% year-to-date.

The sharpest declines were in the West Texas portion of the Permian by large-cap exploration and production (E&P) companies, as well as from lower activity in New Mexico’s Permian, where permitting fell by 125 from April.

E&Ps also cut back in the Eagle Ford Shale of Texas, with permit filings at 43, down by 51 from April.

Meanwhile, ConocoPhillips CEO Ryan Lance said Lower 48 upstream activity is unlikely to return to pre-Covid levels anytime soon, if at all, even as global oil demand shows signs of recovering from the still-raging pandemic.

“If I were a betting man, today I would say it would be pretty difficult for us to return to 13 million b/d,” Lance said in an interview with IHS Markit Vice Chairman Daniel Yergin. Lance predicted the Lower 48 would get above 10 million b/d again, possibly above 11 million, “maybe encroaching on 12 as we go through. A lot depends on the shape of this recovery.”